Dakota Johnson tells her neighbor, Jimmy Kimmel, that their other neighbors suck 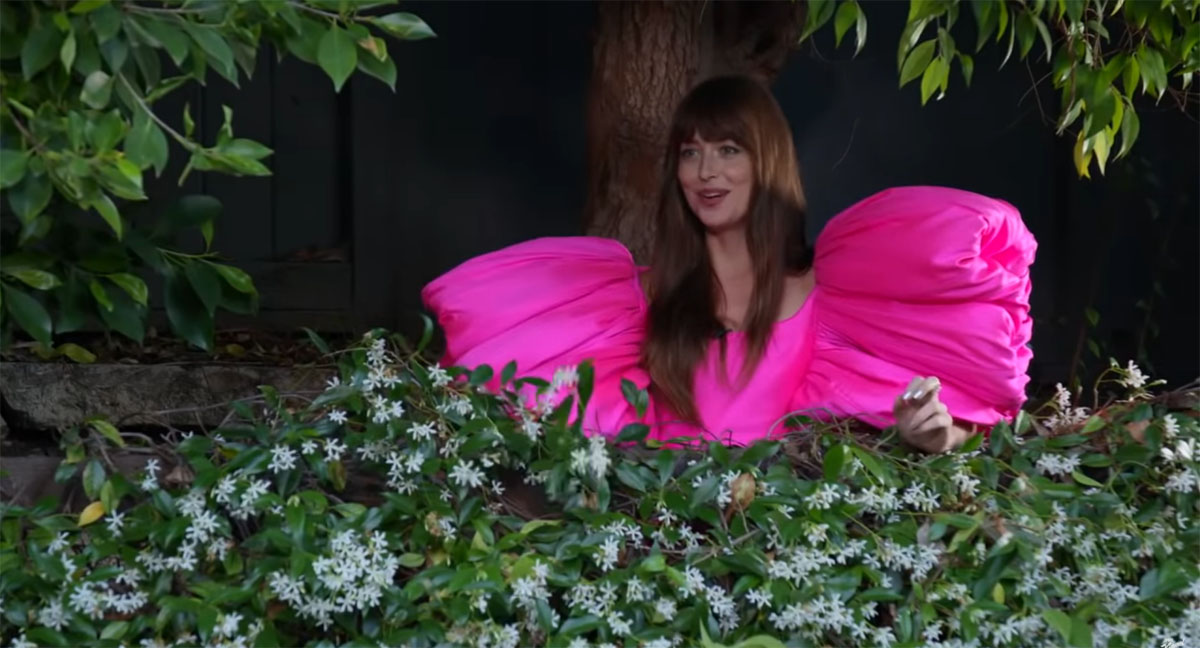 Dakota Johnson was on her neighbor Jimmy Kimmel’s show in a very special guest appearance over the fence between their two properties. She was wearing an enormous fuschia dress with balloon sleeves that she said was straight off the runway and smelled like feet. It was the perfect outfit for a socially distanced interview where you could only see her from the chest up. I’m just thinking of how celebrities are going to dress differently for interviews now. We’re used to seeing so many women’s legs in high cut dresses but now that interviews are remote we’re going to see more creative tops and cleavage. I think Dakota just set a trend.

My favorite part of this interview is when Dakota talked smack about their neighbors. At first I thought she was joking, then Jimmy confirmed that the neighbors to the other side of Dakota had her grandfather’s truck towed! Apparently Dakota confronted the neighbors at a charity event, right in front of Jimmy, and he told the story on his show when he was interviewing her in 2018. Here’s a link to that older interview and here’s what they said back then:

Jimmy: After the event, you and I were chatting near the bar and two of our neighbors came up. You immediately said ‘did you guys tow my grandfather’s truck?’ It was very clear that they did. They [got nervous] and then they just disappeared.

Dakota: I don’t know what happened I just turned into medusa and I’m not a confrontational person at all.

Jimmy: If I have problems on the block I’m going to come to you first and tell you. I laughed about it the whole night. Has there been any fallout from that?

Dakota: No I think I really scared them.

Jimmy: Your grandfather left you this really cool old truck. It’s a beater. It’s got out of state license plates.

Dakota: It’s a ’95 F150 but it doesn’t look super nice. He gave it to me and then he passed away. It’s very sentimental, but these neighbors. I hope they’re watching right now. They kept calling about it. They kept saying ‘I really don’t want to look at it anymore.’

Apparently Dakota got there before the tow truck driver and was able to stop it from being towed. She told Jimmy she was going to send the neighbors a cake of her truck! In this latest interview, Jimmy said he confirmed with the neighbors that they did try to get her grandfather’s truck towed.

On Hunter S. Thompson being her neighbor growing up
Hunter and my dad were best friends. He was at the house every night. He would always bring really bizarre gifts like bird callers, goggles or a fishing rod. He used to come into the driveway at like 3 o’clock in the morning to let us know that he was there.

On her neighbors sucking
You’re the best [neighbor]. The ones on the other side suck.

I had to rent a garage to put my truck in which is absolutely bullsh-t. They never owned up to it. Do you remember that night? That was nuts. I lost my mind.

Jimmy: They did tell me that it was them. [They saw the show.]

I watched Dakota’s Architectural Digest video tour of her home finally, and she bad mouthed the neighbors in that too! She said they’ve been trying to get her to cut her bamboo grove, but that she isn’t doing it because it keeps them from seeing into her yard.

Whenever I have a problem with neighbors, I talk smack about them to other neighbors and try to play like it’s innocent. I’ll be like “oh so and so did this, but I really don’t know how to feel about it” or “have you seen all the dog poop in the neighborhood? It looks like it’s from a big dog, like the one Carole has.” Dakota is openly calling out her neighbors to their faces and mentioning them in interviews! We’ve seen that she’s got some nerve and I’m here for it.

Here’s that interview! She’s so mellow but you do not want to cross her.

21 Responses to “Dakota Johnson tells her neighbor, Jimmy Kimmel, that their other neighbors suck”