Embed from Getty Images
Kristen Bell has been promoting her new children’s book, The World Needs More Purple People. It’s been criticized as an antiquated way of looking at race by ignoring differences and telling children we’re all the same. Plus the title is very similar to a white person’s way of dismissing criticism of racism by saying “I don’t care if you’re purple. I don’t see color.” Kristen was working on it before the latest videos of Black men being murdered by police went viral and the Black Lives Matter movement gained so much steam. Given the content and message of the book someone at Random House should have realized it wasn’t a great idea to put it out now. At the very least she could issue a statement saying that she’s re-examining her beliefs and that she didn’t realize her message can be hurtful. She hasn’t done that. Instead, she’s ignored it, although she has tried to be an ally. She also posted an Instagram story about a Black children’s book author, Ibram X Kendi, who just published a book called Anti-racist Baby.

Kristen co-wrote the book with her friend Benjamin Hart, a white guy, and she explained how they came up with the idea.

We were so discouraged by all the cultural conversations we were having about the things that made us different. We felt that was the only thing our kids were over hearing, instead of highlighting all the things that bring us together as human beings. So we wrote a book about social identity and how kids can overcome all of the divisiveness that they see.

Many of you have mentioned that Kristen might have intended to make some kind of political “let’s all come together” statement because blue plus red equals purple. That’s very possible, but it’s also so white privilegey to tell people to come together despite politics. We can ignore politics because our basic rights aren’t being infringed on every day. We don’t have to worry about our kids being murdered whenever they leave the house. (Or in our homes, frankly.) We don’t have to worry about not getting jobs, getting paid less, not getting mortgages or being denied healthcare.

Kristen and Benjamin felt uncomfortable having tough conversations with their kids. They wrote a whole children’s book helping other parents gloss over these tough conversations, got it published and heavily promoted and the publisher didn’t pull it or even issue an update despite a massive worldwide uprising against racism. That’s white privilege.

Kristen is now saying she’s having uncomfortable conversations with her kids though:

I’ve been having a lot of conversations with my children about what’s happening right now because I think part of the problem’s discomfort. Just because you’re uncomfortable, cannot be the reason a solution is not found. But I think a lot of people are uncomfortable as to how to talk to kids about it. We had a very honest, hard, uncomfortable conversation about what was happening right now because I will raise anti-racists. I will talk about it with them forever.

In her recent CBS this morning interview, Kristen repeated her talking points.

We need to teach people to look for sameness first. You can disagree with as many people as you want, as long as you’re identifying you have more in common than we have differences. How do we create a label that’s exciting that doesn’t leave anyone out?

She also talked about white people holding other white people accountable. While she’s saying some of the right things it just felt off to me somehow. She’s so preachy and her message is muddled. 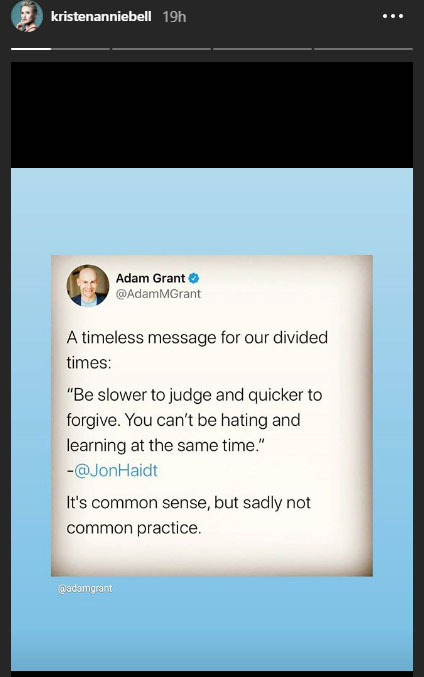 Here’s a clip from her interview with Gayle King. I watched more of this interview on Facebook and it’s just weird.