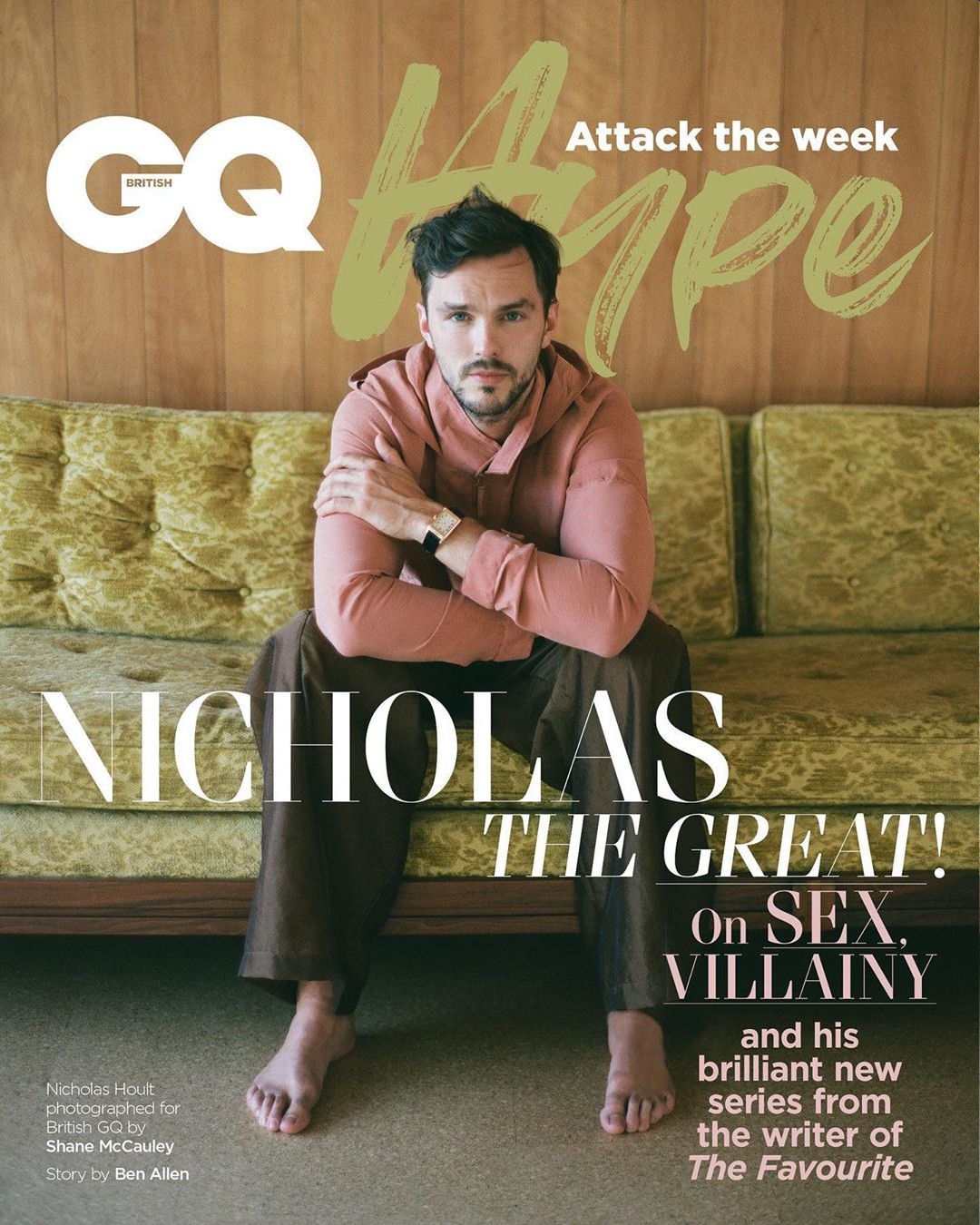 Nicholas Hoult magazine interviews are a rare thing, and I completely enjoyed this British GQ Hype cover story. Like so many actors, Hoult has lightened up over the years – it’s almost like actors finally get to their 30s and they realize that everything doesn’t have to be so dark. Plus, Hoult lives a pretty quiet life – he’s an in-demand actor, for sure, and one of the better actors of his generation, but he’s not constantly Instagramming his life, and he’s quietly in a serious relationship and a father of a child whose name has never been publicly released. Nick is promoting The Great, where he plays Czar Peter to Elle Fanning’s Catherine. You can read the full piece here. Some highlights:

Being in lockdown in LA: “I was reading this article a while ago, about how celebrities are telling people to stay home and then complaining about doing so in their $50 million houses and that wasn’t flying well with people because they’re not living in the same environment. And then to preach their viewpoint… I want to send the right message and do the right thing.”

On Black Lives Matter: He knows he is not who people need to hear from right now and is looking inward and donating money to causes he hopes will help instead. “We [as white people] never fully understand. You can listen and educate yourself and then try to make a positive change from that.”

His relationship with Jennifer Lawrence made him wary of the press: “I didn’t like [interviews]. I guess it’s quite a scary situation, in that it’s kind of out of your control. So that uncomfortable thing would make me shut down and not want to be there. Sometimes you’ll do a five-minute interview when all people want to do is ask about your personal life and dumb things that don’t matter.”

He loves his character in The Great: “He was this kind of man-child, who had developed this abrasive personality from the environment, following in his father’s [Charles Frederick, Duke Of Holstein-Gottorp] footsteps and his mother [Grand Duchess Anna Petrovna of Russia] kind of torturing him. He is the villain in many ways, but, also, because of his lack of any sense of understanding, it makes him quite a funny character.”

He was recently attacked by magpies in Australia: “Everything in Australia wants to kill you, but magpies are like swooping animals that will remember faces” – which caused him to veer off the road into a tree.

His love scenes in The Great: “We had a few intimacy co-ordinators who would come along and help out with that, which is a great thing. This is the first job I’ve had that on and it’s a very positive change in the industry. It’s almost like having a stunt co-ordinator. They make sure everyone is comfortable in terms of what’s happening and agreements of what can happen, but also choreograph it in a way that makes sense for the story and what it is you’re trying to tell.”

Can I just say? It’s really nice to hear positive things from a male actor about the shift towards intimacy coordinators for nudity and love scenes. Usually, it’s just the actresses talking about it, so it’s great to hear Hoult has embraced the change too. And now I have to worry about magpies?!? Seriously though, that’s probably why I could never visit Australia – I would step off the plane and get bitten by an Aussie bug the size of a Volvo and my arm would swell up the size of a log and then I would die. And I do miss Nick and J-Law together, they were so beautiful and tall together. But they’ve both moved on and that’s fine.