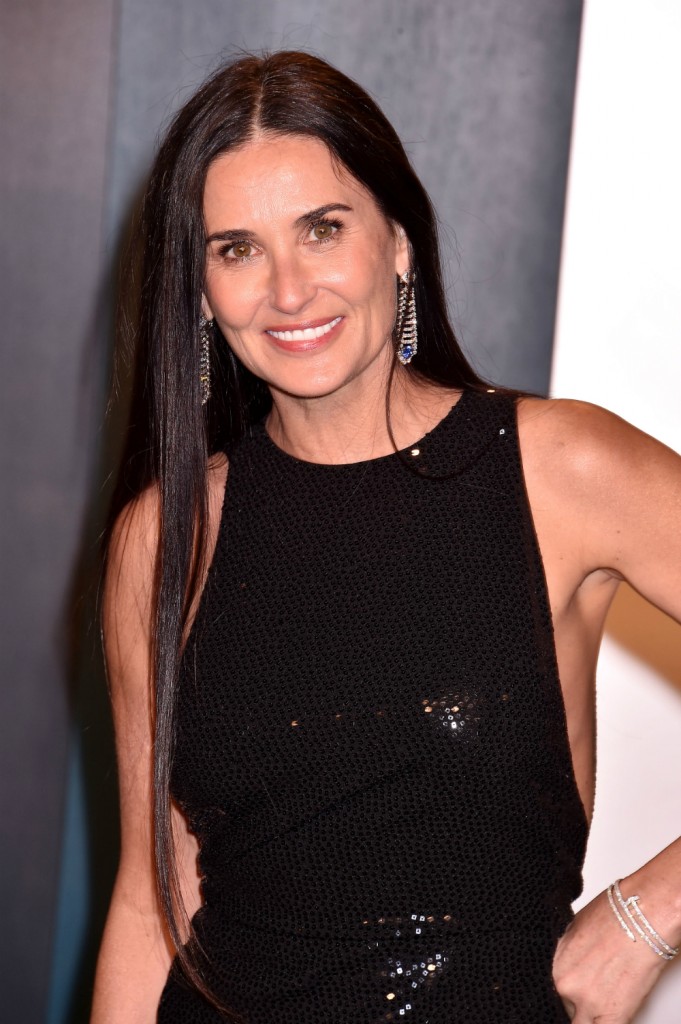 Last week, I came across a Buzzfeed article whose title was so intriguing, I cancelled plans just to read what followed: Every Inch of Demi Moore’s Bathroom Needs To Be Explained. It had all the hot buttons I required – Demi Moore, a unique bathroom and mystery. The quest for answers on Demi’s Inner Sanctum came when Demi posted what I believe were some innocent behind-the-scenes shots to promote her new podcast Dirty Diana, a six-part show about a woman who secretly runs an erotic website where women reveal their intimate fantasies. The concept and audio trailer of the podcast is fairly enticing, so it would take quite a bit to pull focus from it. But we were not prepared:

You can almost hear the record scratch when you see those pics. All attention went into figuring out what the hell was going on in that room. Twitter user, Alexis Wilson (@sassyblackdiva) got the ball rolling with this tweet:

starting a slack channel for the sole purpose us discussing why demi moore has both carpet and a couch in her bathroom pic.twitter.com/4NeLbJCVpF

From there, the dam broke. Some people speculated that the couch was brought in for recording or was maybe being stored there while another part of the house was being worked on. These are logical assumptions, but no fun so let’s ignore them.

Many folks pointed out the chandelier that hangs over the tub. Granted, with the amount of art deco sconces, the chandelier is overkill, but you can’t argue with the drama of a chandelier. Although I could never rest easy in the tub with a light fixture directly above it, I’ve seen too many horror films. While I agree a couch in the bathroom is odd, I am far more distracted by its size – is that a child’s couch? Plus, it doesn’t even try to match the surrounding decor. Which brings us to point two: brown shag carpet? I supposed the color is theme appropriate for a bathroom but still, why?

A lot of attention was given to the Joan of Arc statue in the bathroom, which has featured several times in Demi and her girls’ photos. But honestly, Joan deserves to reside wherever she chooses and if she wants to live out her ceramic form life looking out the gorgeous view from Demi’s bathroom’s picture windows, she deserves it. It’s the toilet that I can’t look away from. Personally, I can’t brook an open toilet plan. Even if I am in there alone, I need a door to be truly comfortable. However, I can see how this failed to register because of the figures surrounding the toilet, like the Gorilla who lives in the crevice in the rock and the hidden cove creature next to the toilet itself. I assume they are there for protection, but you might want to keep Joan of Arc close at hand in case the toilet creatures attack.

The truth is, I don’t know if I want answers. I think I would rather just live with the knowledge that Demi Moore locks herself away in a magical bathroom chamber, where she sacrifices face masks to the toilet wall gods, and in return, they grant her perpetually fantastic skin. I don’t need explanations, I just need to know that it exists.

But one thing that completes the experience is that Demi herself got such a kick out of the public’s reaction:

😂😂 this thread has our whole family howling! https://t.co/rFcsbHpmqi

When she refers to her “whole family” here, I choose to think she’s including Joan of Arc in that.