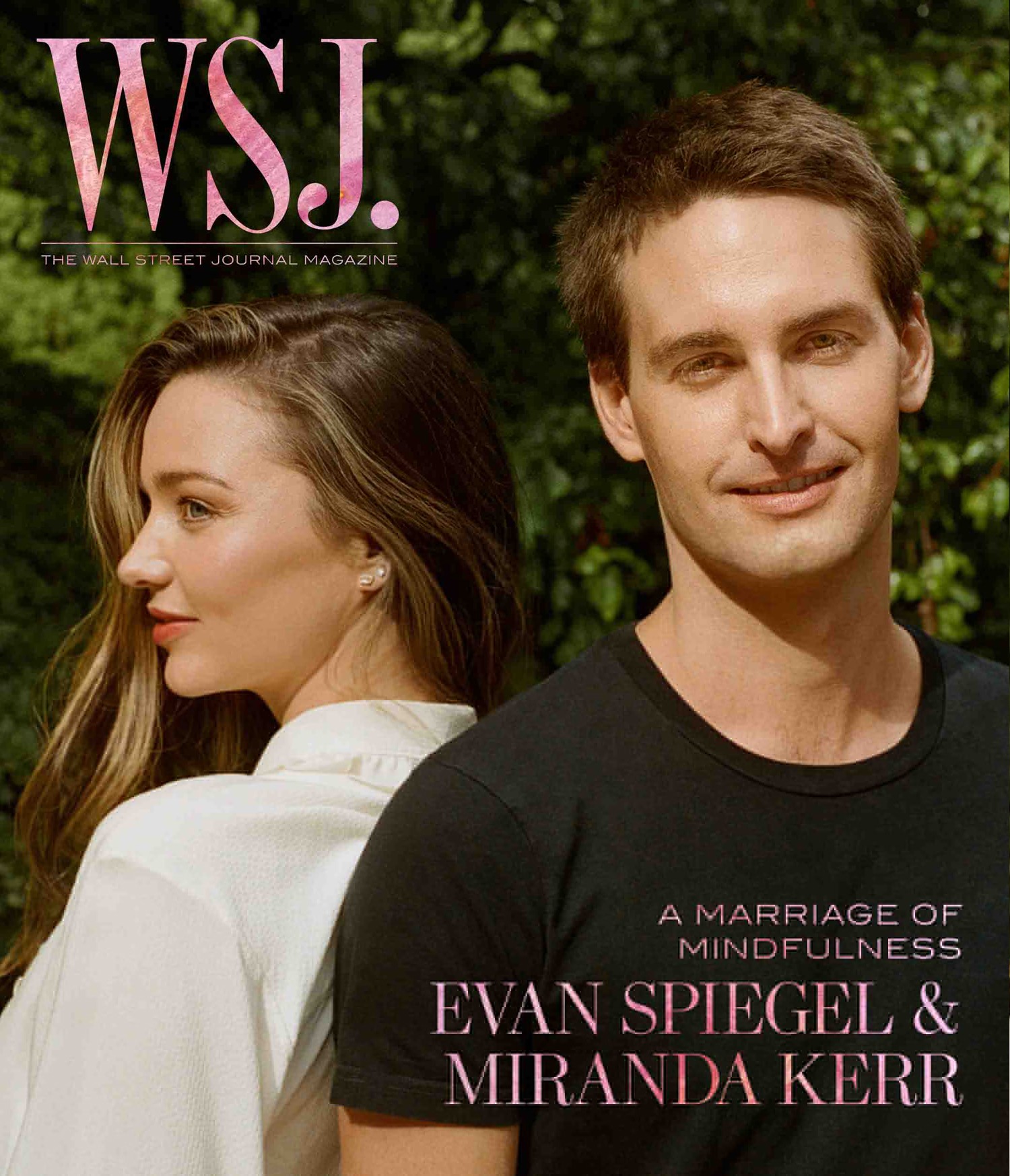 One of my favorite posts that I ever wrote was this piece on Miranda Kerr and Evan Spiegel. It was 2015, and they had only just started dating, and they got pap’d at an airport and Miranda was so thirsty for attention. She tried to make it look like they were some hot-and-heavy new couple and Evan looked scared to touch her. As I said back then, they have the raw sexuality of uncooked hamburger. Still true. But five years later, they’re married and they have two young children together (Hart, 2, and Myles, 9 months old), plus Miranda’s son Flynn from her first marriage. And bless her heart, Miranda is still trying to make it seem like they’re this sexy couple and Evan just… cannot make it work. They posed together for WSJ. Magazine and the cover line of “a marriage of mindfulness” makes me want to vom. Still, it’s curious to see what is really being sold here. I still have questions. Some highlights from the piece:

When they met: Six years ago, the pair were seated next to each other at a Louis Vuitton event at the Museum of Modern Art, when Kerr struck up a conversation with the tech tycoon. They had a great time chatting, and Kerr told Spiegel her favorite song was “Spiegel im Spiegel,” by Estonian composer Arvo Pärt, a tune he had never heard. They then exchanged numbers and Spiegel abruptly left. “All of a sudden he gets up,” Kerr told the magazine and explained that he never followed up. A month later, Kerr got up the courage to text Spiegel a message that said, “Just wondering—did you ever listen to that song, ‘Spiegel im Spiegel’?”

He hadn’t called her because he didn’t think he had a chance: “I thought I had no chance [with Miranda], so I wasn’t going to waste my time.”

Evan respected Miranda’s relationship with her ex, Orlando Bloom: “What I saw from Miranda and Orlando was very different from what I experienced. I am in no way a replacement for Flynn’s dad. I feel like [I’m part of] Team Flynn.”

Evan on Miranda’s open door policy for friends, family & her ex-husband: “This is one of the things I love about Miranda. Everyone is welcome. It’s the Aussie way.”

A sweet gesture: Spiegel says he realized early on into the couple’s relationship that Flynn was the center of Kerr’s life. In fact, he reveals that on their first date he made Kerr, 37, a gingerbread house with icing that said her and Flynn’s names.

Parenting during a pandemic. “[Flynn's] screen-time restrictions are out the window,” Spiegel admits, but Kerr disagrees, retorting: “We do limit screen time around here.” And though the couple admits that they “see the world very differently,” Spiegel says that’s a “huge strength. There’s nothing more helpful than having someone who loves you, and knows you really well, point out a different perspective.”

Um, so Miranda knew she was going to be seated next to Evan, right? Which is why she prepared that pick-up line about her favorite song? And then she pursued him, because hey, girl’s gotta marry a billionaire, huh. I mean, I admire Miranda’s game. I think she knew what she wanted and she went after it and she got it. She’s married to a guy worth billions (on paper at least). And it worked out because Evan actually enjoys her lifestyle and he’s interested in being a good stepfather and father to their two little kids.