Molly Sims is mom to three: Brooks, eight, Scarlett, five and Grey, three and a half. She recently called in to Kristen Kelly’s Mom School podcast and the topic turned to breastfeeding. Molly said she did not produce enough milk to keep her babies fed. She tried herbs and pumps, but nothing got Brooks what he needed so her lactation consultant convinced her to supplement his feedings with formula, which ultimately gave him the amount of food he needed. But even though she was just trying to meet her baby’s needs, she got mom-shamed for doing so.

Molly Sims knows that “fed is best” when it comes to her kids — but the road to that mindset took some time.

The model and actress, 47, chatted with Kristen Kelly for the most recent episode of her Mom School podcast, tearing up as she recalled how “people really mom shamed” her after her son Brooks Alan, now 8, was born, because she wasn’t able to produce enough milk for him.

Sims praised a lactation specialist she worked with named Linda Hanna, who was “ultimately one of the first” people who convinced Sims to make the move to formula.

“She goes, ‘We got to feed this baby some formula. … We’re just going to need a little,’ ” Sims says. “I was taking 18 herbs. I mean, I did a breast pump. I did it all. I did everything. [Linda] was really such a constant and I cannot thank her enough, because that about put me under. I was really depressed over it.”

For Sims, the pressure from people who made her feel like feeding her children formula was akin to giving them “poison” was difficult to bear — not to mention witnessing how easy nursing a baby looked with other moms.

“I always say to women, ‘They come out of you, and you automatically have mom guilt,’ ” she says. “I would see these women, and they just stick that baby on the boob, and I watched it. … I watched her breastfeed.”

This makes no sense to me. A mother cannot produce milk, so people attacked her? Do these same people shame paraplegics for not walking? Although it makes no sense, it, unfortunately, does not surprise me. Many people take their parenting POVs to the extreme. Plus, they have no problem telling/lecturing a total stranger in line at Target, I can only imagine what their poor ‘friends’ are subjected to. (By the way, this is true with many dog owners as well.) Obviously, moms want tips and tricks, the Mom Help book market is big money, but it’s simply not helpful when the suggestion is encased in judgement.

Molly also mentioned that one time she fell asleep while breastfeeding Brooks and rolled over on top of him. It scared her so much that she started having anxiety fueled dreams that plagued her for all three kids about them drowning. I remember dozing off once while breastfeeding. I was sitting in a chair and I woke just as my arm holding my baby started to go slack. It terrified me so much that remembering back to it can still seize my chest. I think that’s part of what Molly was saying about automatic mom guilt. Anything we do that isn’t right – not even that it’s wrong, it just isn’t right – completely messes with our heads. Once the child is born, it’s parental guilt, I don’t think the overwhelming sense that you are completely screwing up parenting discriminates based on biology or gender. 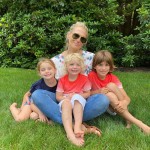