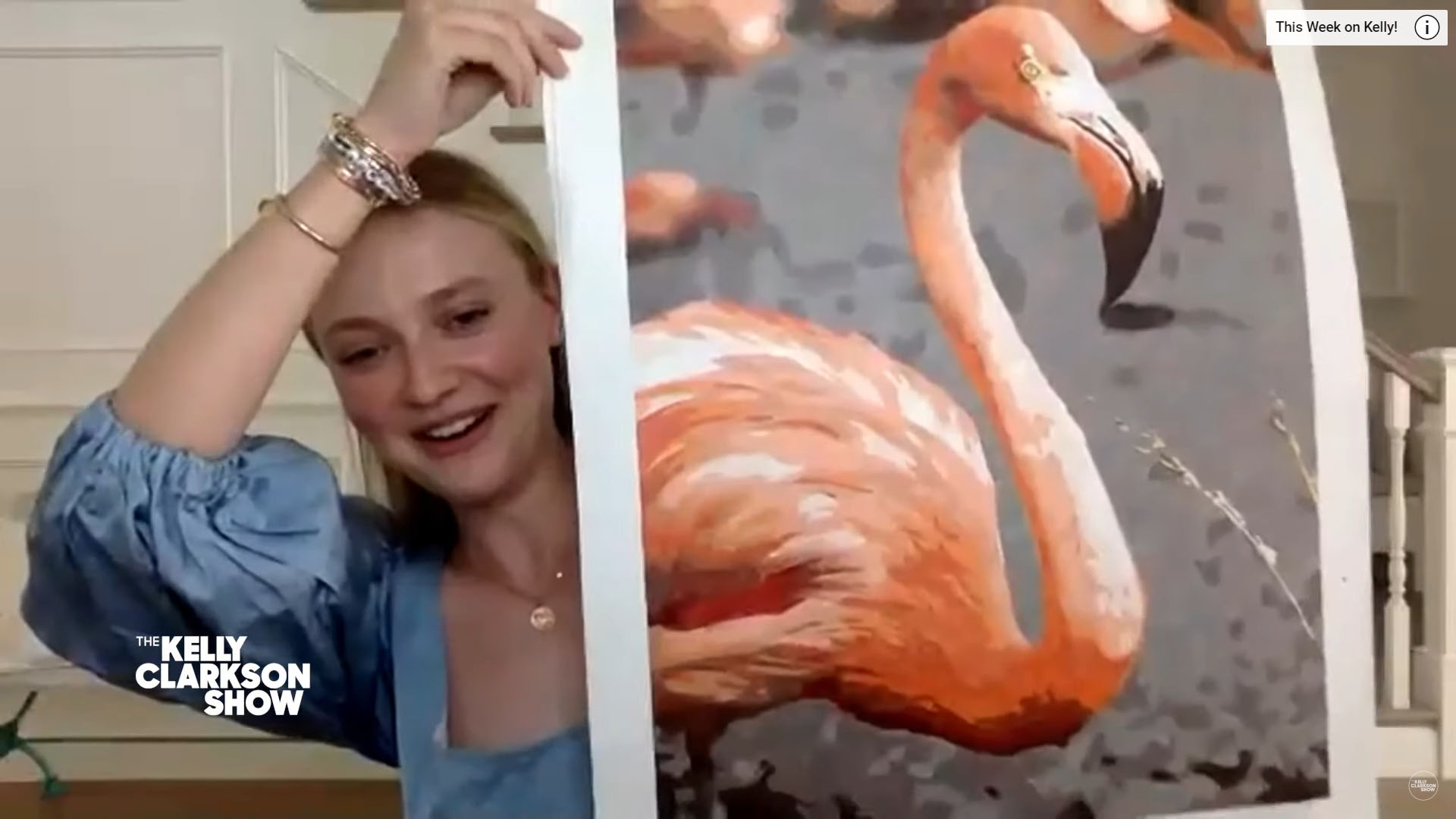 Dakota Fanning was on The Kelly Clarkson show promoting season two of her TNT series, The Alienist. The finale just aired Sunday night. It’s not my type of show, but I’ve heard it’s good. You guys know I’m not a fan of Kelly Clarkson. She’s constantly interrupting her guests and making it all about herself. This interview wasn’t much different, but Dakota was so fun to watch that she made up for Kelly. She always seems so genuinely sweet and kind. Dakota, 26, said she’s quarantining with her younger sister Elle, 22. I can’t believe how old those girls are now! I remember when they were in high school. In lockdown Elle has been ambitious about baking and Dakota has been painting by numbers. She shared one of her creations and it was beautiful. She also said she loves true crime podcasts and that she listened to them often while she was filming in Hungary.

She’s quarantining with her sister, mom and grandmother
We gotten to spend a lot of time together which has been good. We are really close. [Elle] made Boston cream donuts from scratch the other day, which took like eight hours. I left in the morning and I came home at night and they still weren’t done.

She loves true crime
I’m always really up to date with [true crime podcasts]. When everyone was watching Tiger King I was like ‘I listened to this podcast in Budapest last year.’ When you’re by yourself for seven months in a foreign country there’s a lot of alone time. I’m a big true crime person I listened to all those podcasts watched all the documentaries.

On if she has ever wanted a different kind of job
Like the detective agency having your own office. I really liked that. I suppose I can have an office one day. That’s something I can do. It’s fun to have a desk and sit behind your desk and have everything decorated.

I’ve always wanted to go to Budapest after seeing a documentary on the historic public baths there. I’ll put that on my after-quarantine travel list along with Greece. Also I love her paint by numbers results! I’m not much of an artist and am not into crafts, but I think I could do that. My friend Karen has been doing a project like that with little colored beads and she says it’s relaxing. I need a new hobby as all the baking, cooking and cleaning isn’t cutting it. The paint by number kits from the brand she mentioned are $42 each, which seems pricey but I guess it’s not so bad if you get a real canvas. Amazon has some really nice ones too for about half that cost.

Aurora and I are here to tell you #wearadamnmask ! Thanks for the nomination @susansarandon 💗