Brandy on her depression: ‘If Sy’rai wasn’t here, I wouldn’t be either’ 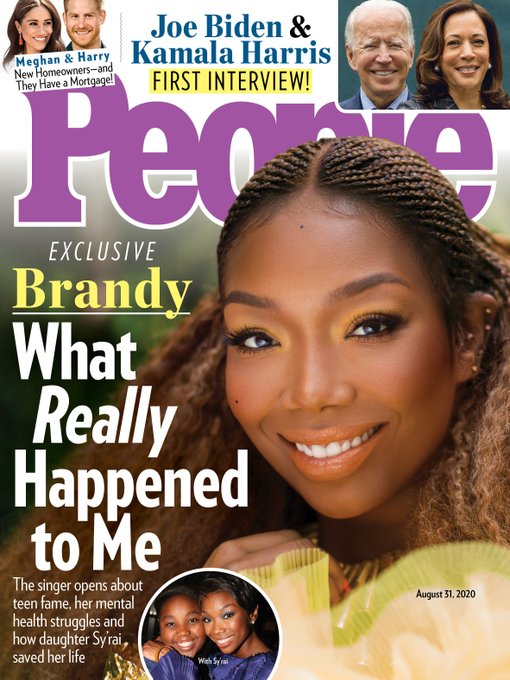 Singer/Actress Brandy seems to be making a major comeback in 2020. Her syndicated 90s show, Moesha, was bought by Netflix and made available for streaming. Plus she’s is now in talks for a reboot of the same show AND she recently released a new album. For someone who has been silent for the last eight years, it ain’t shabby.

Brandy was seen as every Black person’s little sister in the 90s. She had a squeaky clean persona until her image took a hit in 2002 when everyone discovered that she wasn’t married to the man she had a daughter from. Yes I get it, many people who are not married have have babies, but Brandy’s case she and her “husband” were doing a reality how in which they pretended that they were.

Fast forward eighteen years later and Brandy’s daughter is graduating high school and Brandy is releasing an album after being on hiatus. In her cover with this week’s People, Brandy talks about battling depression and how her image made her feel trapped. Here are a few excerpts from the interview.

On why it took eight years to release new music
“I was a little bit lost eight years ago musically, creatively, spiritually,” she tells PEOPLE in this week’s cover story, opening up about the highs and lows of child stardom and her battle with depression. “I had to pull myself together, I had to pull it all together and make it all make sense.”

On her clean image
Early on, she says fame felt like “pure joy.” But despite her ever-positive, upbeat image, Brandy, says that as she matured, she began to feel trapped by her “perfect” public image.

On the birth of her daughter
In 2002 she welcomed daughter Sy’rai, with then partner, producer Robert Smith. The pair would split a year later and Smith would go on to reveal that despite what they’d portrayed while filming a reality TV show during her pregnancy, he and Brandy had never married. “It changed people’s perspective of me,” she says of becoming a mom and the situation with Smith, “but I had to focus on what was important, which was Sy’rai.”

On contemplating suicide
“I remember laying in bed super depressed,” she says. “I [told] myself, ‘So, you’re just going to go out like this? That’s wack. You have a daughter. If you can’t do it for yourself, do it for her because this is not the way to leave a mark in her life.’”

She credits Sy’rai, now 18 and a 2020 high school graduate, with pulling her out of the darkness she felt. “If Sy’rai wasn’t here, I wouldn’t be either,” she says. “The place that I was in, it just felt like I wasn’t going to make it through.”

On staying on track
“I was thinking, ‘Did I go too deep? Did I go too far in what I was singing about?’ But I didn’t dwell on those thoughts,” she says. Staying on top of her mental health with therapy, meditation, journaling and her faith, Brandy says she’s finally feeling back on track.

When I sat down to write this story, it hurt a little. I am slightly older than Brandy and I remember when she burst on to the R&B scene in the early 90s. You knew she had a bright future ahead. She was extremely talented and seemingly very well adjusted. Once the news hit about her pretending to be married it was confusing as to why she would lie about such a thing. But it made so much sense once you realized it went against this image of purity her parents and producers created for her.

It was then wonderful to see her empower herself and begin again after the non-scandal. But when she disappeared again, I honestly just thought that she was hit hard by the passing of her friend and mentor Whitney Houston and that she was busy being in love or raising her daughter. It hurts to read that she was in such a dark place that she considered ending it. Talking about mental health issues, especially depression in the Black community, is something that I wholeheartedly advocate for. I am sure it took a lot of courage for her not only to write this very personal album but to talk about such a taboo and personal subject. I am glad she is finding ways to cope and that she has channeled that into her music. As someone who suffers from PTSD, anxiety and depression, I do understand that feeling of hopelessness and that dark cloud that seems to follow with it.

I hope that celebrities from the Black community, like Brandy and Yahya Abdul-Mateen II, continue to talk about therapy and mental health. And maybe just maybe the stigma of it will eventually disappear.

My beautiful daughter @syraismith 🌹 Brightest light in my life. Angel no disguise ♥️ #17

19 Responses to “Brandy on her depression: ‘If Sy’rai wasn’t here, I wouldn’t be either’”