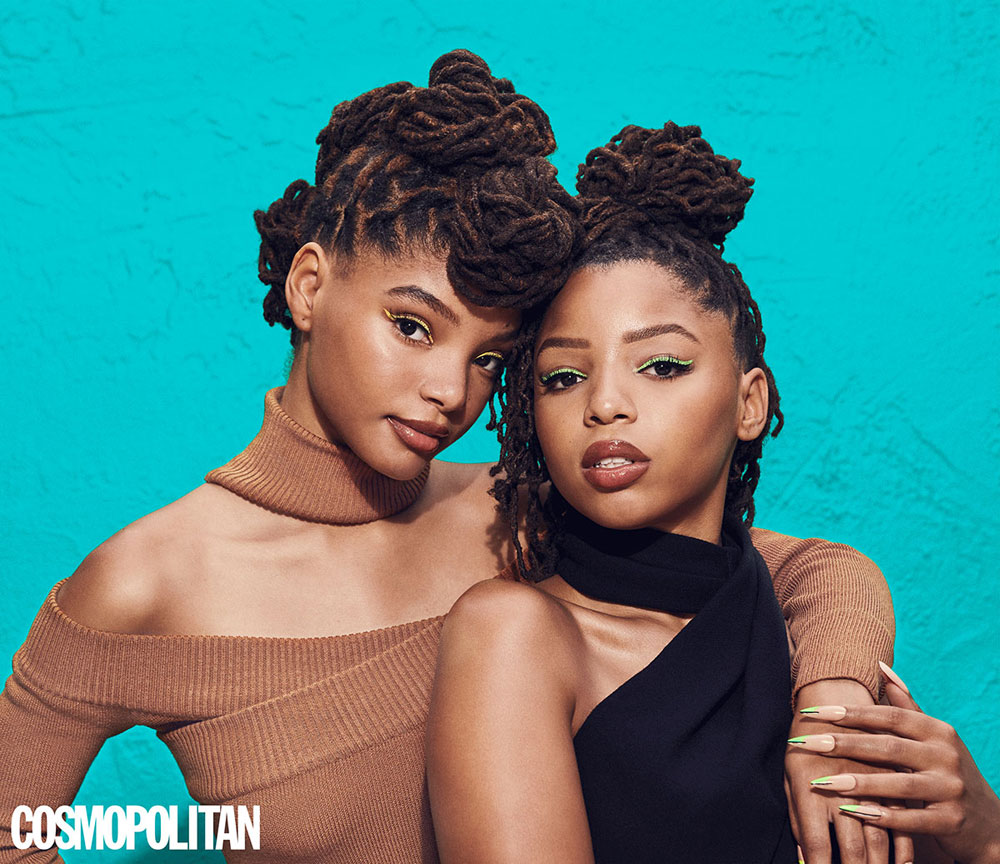 Chloe, 22, and her younger sister Halle, 20, who make up the R&B duo Chloe x Halle made their singing debut back in 2012 with cover songs on Youtube. Since then they were picked up Beyonce’s Parkwood Entertainment, starred in Freeform’s Grown-ish, and were nominated for two Grammys for their 2018 debut album.

Halle signed on to be star as Ariel in Disney’s live action Little Mermaid movie and Chloe will star in Russell Crowe’s The Georgetown Project thriller. The sisters with the angelic harmonies released their sophomore album Ungodly Hour back in June and made us all notice that they are women now with their performance for the VMAs a couple weeks ago. Although Chloe and Halle operate like a unit, a two for one deal, they are indeed their own women. Chloe and Halle cover Cosmopolitan’s October issue where they talk about their writing process, how they use coloring books to stay in touch with their inner child, and becoming their own impression of womanhood. Here are a few excerpts:

On using coloring books to wind down and stay connected to their inner child:
Yes, they’re coloring. It’s their new wind-down activity—a way to tap into that inner-child energy they sing about staying connected to on Ungodly Hour’s ode to self-love, “Baby Girl.” The part of you that’s unjaded and hopeful.

“I’ve gotten hooked because I don’t really communicate how I feel inside,” Chloe tells me of her new hobby on a quiet mid-July morning in Los Angeles, her cute bubblegum-pink spaghetti-strap bodycon dress begging to be let out of the house, her locs swinging around her shoulders as she fills in a trippy-looking stag’s head. She shares this deeply real revelation fewer than five minutes into our Zoom call. She refuses to share, however, the title of her coloring book, one of two Halle got her for her birthday. Instead, she holds both up to the laptop camera: Calm the F*ck Down and F-ckity F-cker. Halle, coolly flexing in a high ponytail, pristine lip gloss, and a Chloe x Halle hoodie from their merch collection, is smirking. “I color when I’m upset or just feeling anxious,” Chloe continues. She’s the type of person who likes to stay busy, to have a plan, to know exactly what’s coming next. Without that sense of control, she says, “I get very anxious.”

On their writing process for Ungodly Hour
During the mood-boarding process for Ungodly Hour—which Chloe describes as “like, four posters we taped together with red duct tape on a wall in our studio”—they cut out and attached the phrase “the trouble with angels” because it resonated with the layers they wanted to reveal. The album name they wrote as a result symbolizes, for them, the idea that there’s room for error and self-acceptance even at their flawed and most impious moments. “It’s okay to accept all that you are, all of your layers,” Chloe explains. “You at the ungodly hours.”

On their individual expression of womanhood
“Whatever we bring to the table,” Chloe says, “it’s not like we’re trying to come up with, ‘Okay, I’ll be this way and you be that way.’” But it does speak to the fact that yeah, Chloe x Halle may be one artist, but Chloe and Halle are two different women. Take, for instance, that Chloe does most of the talking, while Halle doesn’t rush to speak.

Halle laughs as she muses about her inner Aries (translation: fiery, passionate, overly honest) coming out in relationships, while Chloe’s big-sister energy comes off as nurturing, analytical, and tender. (She’s a Cancer.) They may naturally complement each other, but it is natural. “We’re not trying to force anything or purposely construct two different narratives or suffocate the other into one type of way,” Chloe says.

Chloe and Halle have grown up before our eyes. I remember watching them singing in their room together on Youtube and noticing how talented they were. I took a four year hiatus from celebrity news back in 2015 and am just now catching up. I am loving seeing how much they have grown and come into their own. Even though they walk in sync like twins that finish each other’s sentences, I do like how they maintain their individuality.

Their popularity to me is very deserved and the new album is a bop. I have been listening to some of the tracks all week. It also makes me happy to see two sisters not competing against each other but creating space for and holding one another tenderly. This is true sisterhood and to be fair I am a bit jealous. I have always wanted a baby sister.

On a side note, this is the second time adult coloring books have come up, first a friend battling an illness told me to buy one and try it out and now this. I think I will buy one and start coloring as a form of meditation.

Anyhow, if you haven’t watched Chloe x Halle’s VMA performance you need to (I embedded it below). The photospread from this article ais fire. I can’t wait to see what these sisters get up to once we can go back out into the world. If the Twitter chatter about their album and VMA performance is any indication, I think we are in for a Chloe x Halle world domination. 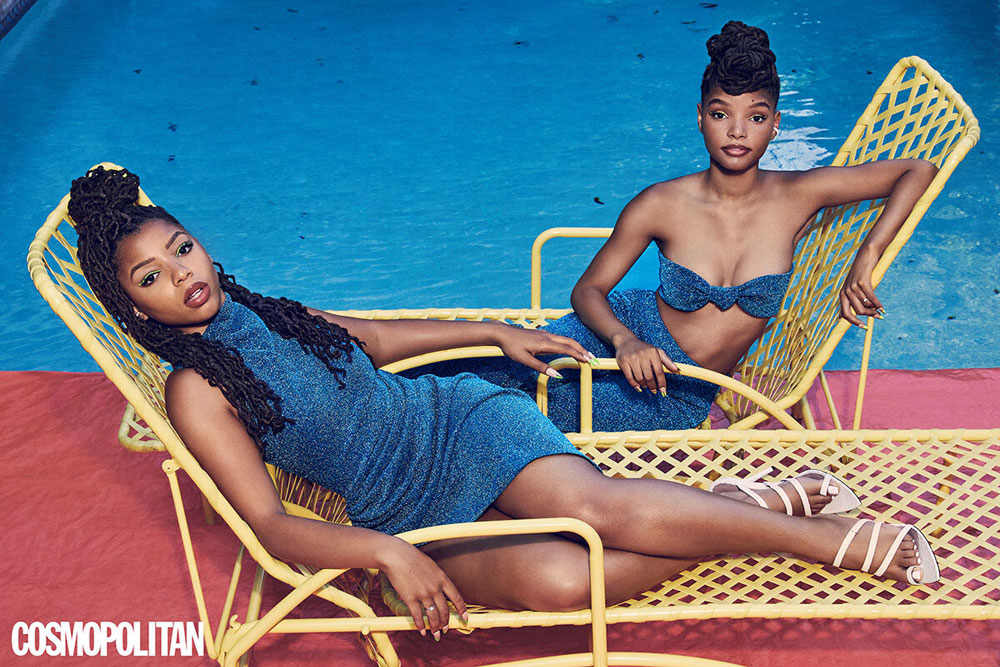 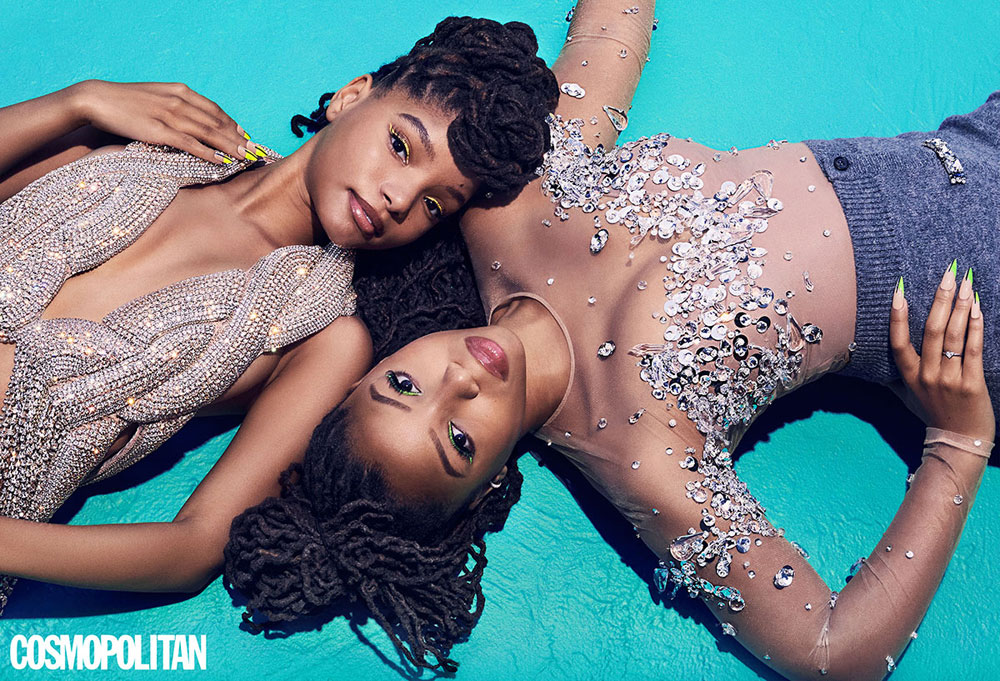 Photos by Ramona Rosales for Cosmopolitan