Embed from Getty Images
Since leaving Star Wars, John Boyega has been speaking out about the discrimination and frustration he felt for not being supported by the creators and studio against the constant racist online abuse from some of the extreme fans. He’s also mentioned the fact that they decided to sideline the majority of the characters of color by the last movie.

Fragrance brand Jo Malone has had to apologize to John for erasing him from their ad campaign in the Chinese market. John became Jo Malone’s first Black global ambassador last year. John wrote and directed a commercial commercial promoting Jo Malone’s aftershave. However when it came to the brand’s Chinese market, they decided to copy and paste Asian actor Liu Haoran along with other white and Asian actors into the ad instead, effectively erasing John and Black people AND stealing John’s work. Here is more on the story from The Guardian:

Boyega was replaced by Liu Haoran after the commercial was recast and reshot for the Chinese market. The original advert, London Gent, which was released last year, featured Boyega walking around Peckham, south London, riding a horse, dancing with friends and hanging out with his family. The original cast was multicultural, while the Chinese remake featured no black cast members.

“We deeply apologise for what on our end was a mistake in the local execution of the John Boyega campaign,” Jo Malone said in the statement to the Hollywood Reporter.

“John is a tremendous artist with great personal vision and direction. The concept for the film was based on John’s personal experiences and should not have been replicated.”

The company added that while it “immediately took action” and removed the local version of the campaign, “we recognise that this was painful and that offence was caused. We respect John, and support our partners and fans globally. We are taking this misstep very seriously and we are working together as a brand to do better moving forward.”

Last year, Boyega, who was named the male global ambassador for Jo Malone, reflected on the deeply personal nature of the advert. “There are several people in this video that have either given me a place to stay in LA while I haven’t had one, or just have been consistent in our friendship for years,” he told Women’s Wear Daily.

“There’s a mixture of things you see me do in that film, you see me in a professional environment on a film set, then with family and it’s about breaking free of the concept of ‘going back or returning to your roots’, but more about the roots existing with this new side of my life.”

According to the Hollywood Reporter, Boyega was not made aware of the recasting of the ad and only found out about it on Twitter.

Like I said, this isn’t John’s first time at the rodeo. He experienced being minimized in the Star Wars ads in the Chinese market for the Force Awakens. But what is egregious in the case of Jo Malone is the fact that the concept for the ad was created by John. Furthermore, John found out about this on Twitter.

This is bigger than a misstep in my opinion. John deserves more than a public apology. He deserves compensation for the use of his creative property without permission. One of the writers from the WWD article says that she doesn’t believe the move was racist and that Jo Malone was being savvy and catering to the market. I would agree with that if Jo Malone had created a concept that spoke to the culture of the region and not just cast Asian and white actors in the original roles like a bad copy and paste. It was a terrible move and the Jo Malone team really needs to do some soul searching on this one.

In response John has announced that he is stepping down as Jo Malone’s first male global ambassador. He states that the campaign that HE created also won the Fragrance Foundation Virtual awards 2020 for Best Media Campaign. So, I don’t blame him for stepping down. He is definitely staying true to his message and principles. Here’s part of his statement and the full statement is below.

I have decided to step down as Jo Malone's global ambassador. When I joined the brand as their first male global ambassador last year, I created the short film we used to launch the campaign. It won the Fragrance Foundation Virtual awards 2020 for Best Media Campaign.

In the meantime, I hope John finds roles that allow for his passion without erasing him. Roles that provide a safe space where John is supported and protected. What I am enjoying is how BIPOC, particularly Black artists, are exposing all the crappy dealings of these industries. I feel this is a good thing.

The original advert and the Chinese version:

Perfume-maker Jo Malone took an ad filmed by John Boyega of Star Wars and refilmed it for China using a Chinese actor and zero black people. Sadly, Boyega must be used to this; remember what happened to him in Star Wars posters in China:https://t.co/YYRivQIAyS pic.twitter.com/AuNNmklIWr 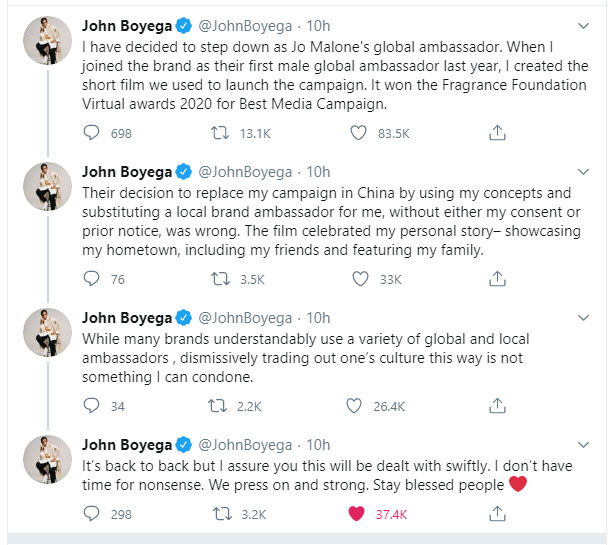 We stand with and support you @JohnBoyega and all of the black community.