Gillian Anderson on people complimenting her skin: ‘I often fall asleep in my makeup’


Embed from Getty Images
Gillian Anderson is covering Net-A-Porter’s The Edit magazine. She’s one of those 50-something women who gives me hope that it’s not all downhill from here. I know that’s terribly negative but I feel like I’ve aged five years in 2020. I’ve recently watched Gillian on Kimmel and she’s not highly quotable as she mostly talks about her work. That was the case in this interview too too, but I liked what she said about Black Lives Matter and about playing Margaret Thatcher on The Crown. She said the right things about listening and realizing she was getting an education she didn’t know she needed. She also said that she didn’t hate Thatcher like a lot of Britons because although she was born in the UK she grew up in the states. That’s why her accent work is so good! I didn’t realize that about her. Here’s more of her interview:

On people saying she looks younger than 52
“I’ve heard from my mum, my whole life, that my great-grandma Rose had really good skin, but I often fall asleep in my makeup, and whenever I do a photo shoot, everybody always points out that my skin is really dry.”

On not having preconceived notions about Thatcher
“My family moved to the States in 1979, the year she came to power… so I don’t feel like my experience of her was anything like it might have been had we stayed and [I had] been around adults who were expressing their opinions. I hadn’t developed any kind of opinion whatsoever. I only heard people’s very strong reactions with regards to her policies when I was an adult, so I did start with a blank slate.”

“If I felt strong opinions about how she parented or how she ran the country, it would definitely have had an impact on how I played different scenes, so I felt, as an actor, it was important to leave all that stuff at the door.”

On waking up to systemic inequality
“No matter how much work I do for charities, I don’t think I’d really ever studied or taken full account of the myriad ways that society works against people of color and minorities, how endemic it is and how structurally impossible it is for so many to get beyond a certain place.”

“That was the beginning of an education I didn’t even know I needed. I’m learning how brainwashed I feel I [have been] and we are as a society, and how much there is to learn about what needs to systematically change. I have a tendency to try to close my mind against certain things… [But] it is a time to listen.”

In our Zoom group we asked Sara, she lives in Birmingham, about the Thatcher Thatcher Milk Snatcher rhyme and she said when she was a little girl she stopped getting free milk at school because of Thatcher. She also said her nan hates Thatcher and that people were dancing in the streets singing “ding dong the witch is dead” when Thatcher died. (You can hear that on podcast #74 at minute 12:20.)

It’s probably a good thing that Anderson went into that role without a lot of preconceived notions because her performance is vulnerable and sympathetic. She also talked about the fact that she studied Thatcher’s voice and noticed a difference in how she talked to her family and how she talked to parliament, of course. The result was a “balance” of Thatcher’s vocal styles. I suspect she’s going to get an Emmy for that. If so it would be her second (she won in 1997 for X-Files, she’s been nominated four other times, three for X-Files and once for Bleak House).

As for the quote in the title, I never fall asleep in my makeup. Maybe it really doesn’t matter. Like I said she gives me hope. Gillian looks natural and I suspect that helps her land more roles too. 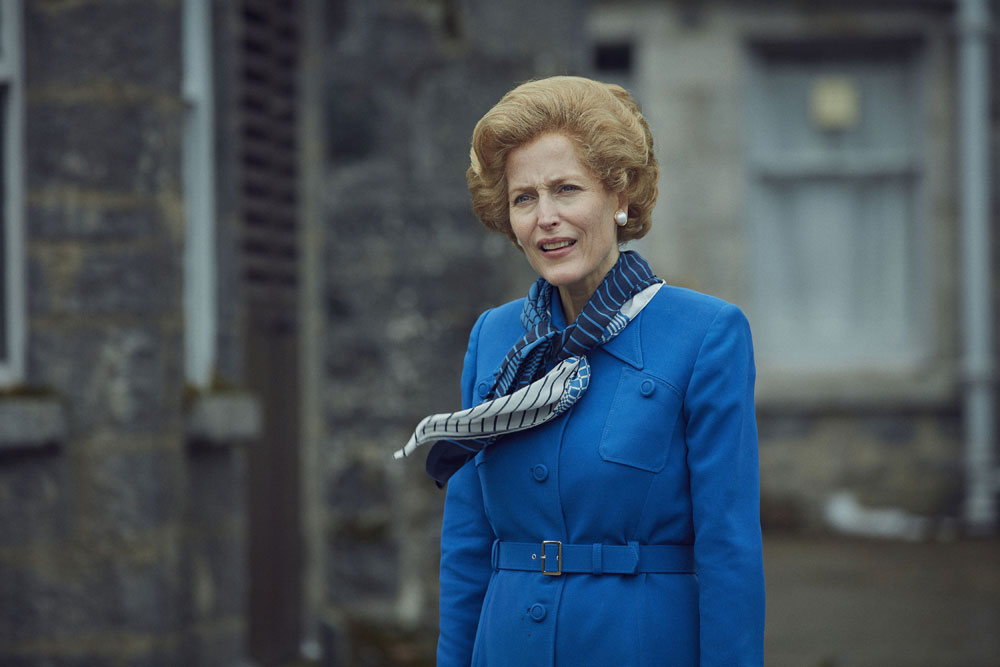 27 Responses to “Gillian Anderson on people complimenting her skin: ‘I often fall asleep in my makeup’”