Time Mag announces their first-ever ‘Kid of the Year’, a 15-year-old scientist 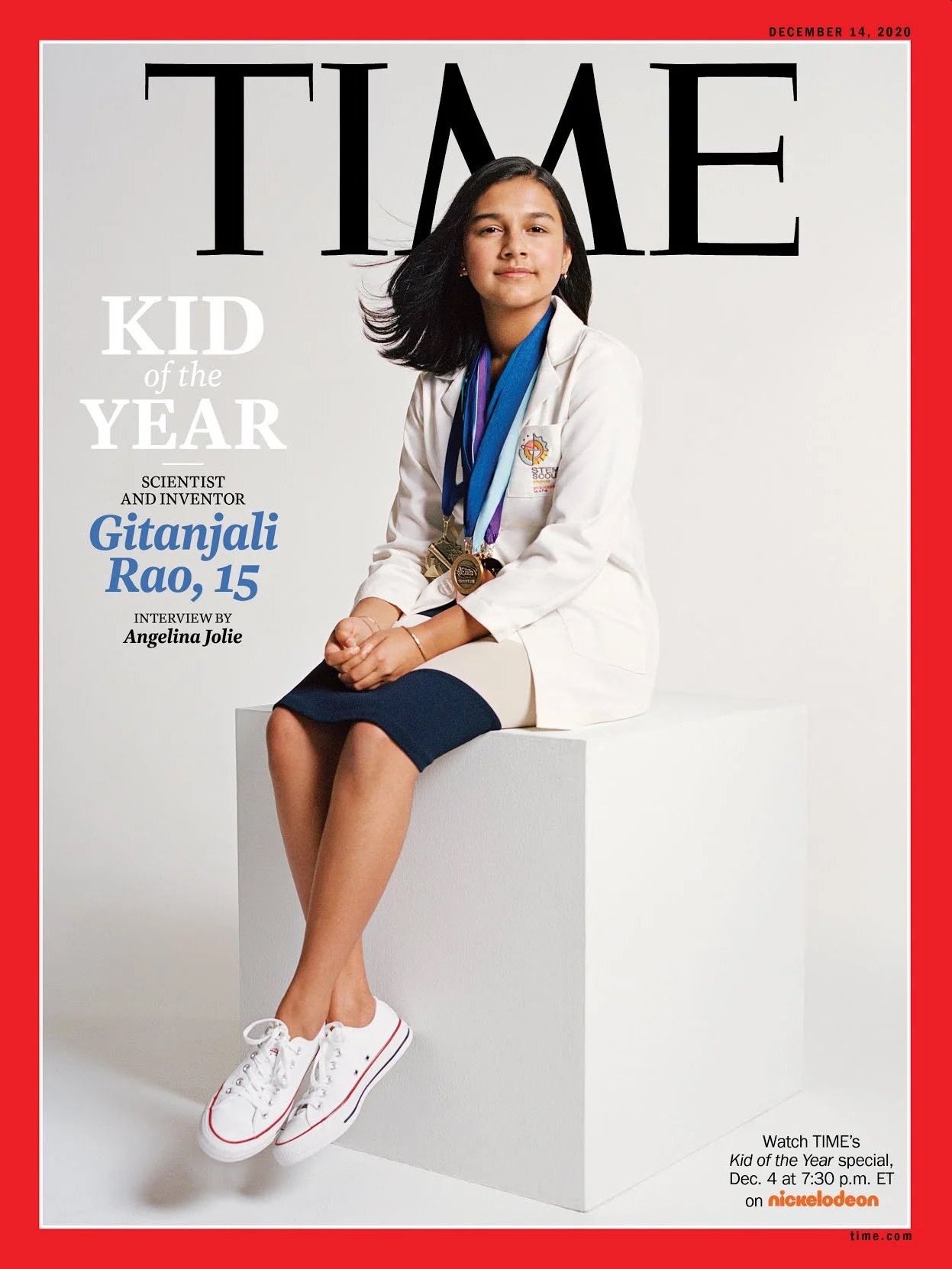 ‘Tis the season for People of the Year listicles, and I’ve been looking forward to seeing who Time Magazine would name as their 2020 Person of the Year. My guess is either Joe Biden or “health care workers/frontline Covid workers.” Time Magazine hasn’t announced it yet (obvs), but they’re releasing some of their other POTY covers, and they created a new category: Kid of the Year. Which is really cool! The first ever Time Mag Kid of the Year is Gitanjali Rao, a 15-year-old Indian-American girl scientist who mentors kids to get involved with scientific real-world problem-solving and solves many problems on her own. She lives in Colorado, and she works on everything from coding to contaminated water to opioid addiction. They got Angelina Jolie to do a Zoom interview with Gitanjali and it was very sweet – you can read the full piece here. Some highlights:

ANGELINA JOLIE: When did you know that science was a passion of yours?
GITANJALI RAO:
I feel like there wasn’t really one specific aha moment. I was always someone who wanted to put a smile on someone’s face. That was my everyday goal, just to make someone happy. And it soon turned into, How can we bring positivity and community to the place we live? And then when I was in second or third grade, I started thinking about how can we use science and technology to create social change. I was like 10 when I told my parents that I wanted to research carbon nanotube sensor technology at the Denver Water quality research lab, and my mom was like, “A what?” [Editor’s note: they are cylindrical molecules made of carbon atoms that are very sensitive to chemical changes, and thus are good for detecting chemicals in water, among other uses.] It was just that changing factor of, you know this work is going to be in our generation’s hands pretty soon. So if no one else is gonna do it, I’m gonna do it.

AJ: I love that. So much of what my generation should be doing is just making sure we do as little damage as possible to ensure that the next generation can take the lead…I know one of your latest innovations helps prevent cyberbullying. Could you tell me about that?
GR: It’s a service called Kindly—there’s an app and a Chrome ­extension—which is able to detect cyberbullying at an early stage, based on artificial-­intelligence technology. I started to hard-code in some words that could be considered bullying, and then my engine took those words and identified words that are similar. You type in a word or phrase, and it’s able to pick it up if it’s bullying, and it gives you the option to edit it or send it the way it is. The goal is not to punish. As a teenager, I know teenagers tend to lash out sometimes. Instead, it gives you the chance to rethink what you’re saying so that you know what to do next time around.

AJ: So you just put it on your kids’ phones?
GR: Yeah. I put out a survey to parents, teachers and students, and I honestly expected that students don’t want to be micromanaged.

AJ: Right. My kids would be like, “Don’t touch my phone, I’ll do it myself.”
GR: No, exactly, that’s what I would be like. But a lot of the teenagers were telling me that, you know, it doesn’t seem like I’m being micromanaged; it seems like I’m being given an opportunity to learn from my mistakes. So that’s what I was superexcited about, that they understood what the goal of it was.

AJ: The way you’re talking about technology as a tool to remind people and help them to grow seems like a very new and different thing. It’s so exciting to have such a forward-­thinking young, and female, inventor. Does that affect you in any way? It’s surprising because I think of women as being brilliant, but there are so few women in the science and tech fields.
GR: I don’t look like your typical scientist. Everything I see on TV is that it’s an older, usually white man as a scientist. It’s weird to me that it was almost like people had assigned roles, regarding like their gender, their age, the color of their skin. My goal has really shifted not only from creating my own devices to solve the world’s problems, but inspiring others to do the same as well. Because, from personal experience, it’s not easy when you don’t see anyone else like you. So I really want to put out that message: If I can do it, you can do it, and anyone can do it.

AJ: You know, one of the things you pointed out which is so important is that there is so much, you can get overwhelmed. When I started working in refugee camps, there are so many different issues to deal with within a displaced situation. You get overwhelmed, and you don’t really move. I love what you’re saying: find what you’re passionate about, and don’t try to solve everything. Every solution is a part of the bigger picture of what we have to do. I really hear that and appreciate you saying that. Where do you get your news or do your research?
GR: My pop-culture news is actually MIT Tech Review. I read it constantly. I think that’s really where inspiration strikes: hearing about all these amazing people at schools like MIT and Harvard who are doing such amazing work with technology. And I try to connect it back to what I see out there and put it together in a way that no one’s seen before.

Angelina was so jazzed about talking to Rao! Angelina was seriously impressed, as am I. This kid is going to rule the world, she’s a little genius and I hope no one dampens her spirit or tries to shove her in a box where she can’t explore all of her interests. This child reads MIT Tech Review! My God. I want to be her cool Indian auntie. I would be like “put down the microscope, I’m taking you to the movies and we’re going to get ice cream.” But she would probably figure out how to cure cancer while watching a Marvel movie or something.

17 Responses to “Time Mag announces their first-ever ‘Kid of the Year’, a 15-year-old scientist”