I’m a moderately good cook and a beginner baker, and I’m not as experienced at it as Oya or Hecate. Early in the pandemic I did a baking post with some of my favorite recipes. That was the first time I’d baked and I was surprised how much I liked it. I was super ambitious back then and tried some things I only did once, like challah bread and buttermilk bread. Banana bread has been a staple though and I think my son got sick of it. He won’t say that outright, but he doesn’t eat as much of it so I don’t make it as often.

For Christmas dinner I planned to make stuffing but realized I’d forgotten the crusty bread at the store. I figured that I could make my own bread, but after I made it I decided to just make the bread the side instead of bothering to make it into stuffing.

I googled “easy crusty bread” and found this “artisan” bread recipe. It does take yeast but it’s so freaking easy! Even if you haven’t baked before, you can make this. This bread takes three ingredients and the only real work is just mixing and shaping a little. You probably already have these ingredients at your house, and all you need is a bowl and cookie sheet.

You mix the ingredients, leave the dough out for a few hours to rise, stick it in the fridge overnight (although you can bake it then if you want) and half-ass shape it into loaves the next day. You do have to let the loaves sit for about 45 minutes before putting them in the oven. If you want crustier bread you put boiling water in a dish in the oven, but this is optional. There are several steps but it’s mainly just planning ahead and waiting, which is already a major part of my lifestyle. It’s not messy or complicated compared to other baking I’ve done. Here’s part of the recipe, from Sally’s Baking Addiction, and her video is below. Go to her site for more tips and tricks if you’d like to make this. I use regular Gold Medal all purpose flour (not self rising), store bought regular yeast (not quick yeast, I just let the dough sit out longer) and kosher salt.

Mix the dough ingredients together. At first the dough will seem very dry and shaggy and you’ll question if it will even come together. But it will. Use a spatula at first, then switch to your hands to ensure all of the flour is moistened. The dough is actually a little sticky after it’s thoroughly mixed.

Use right away or refrigerate. After 2-3 hours, you can immediately continue with the next step. However, for ideal flavor and texture, I strongly recommend letting the dough sit in the refrigerator for at least 12 hours and up to 3 days. Yes, 3 full days! I usually only let it rest for about 18 hours. During this crucial step, the cold air slows the fermentation process and adds so much flavor and texture. So, you can bake bread in 2-3 hours or in 3 days. The longer it sits, the better it tastes.

Shape into 2 loaves or 1 boule. Rest as oven preheats. You can shape the bread into a round loaf (boule) or two longer loaves. I usually make 2 longer loaves side-by-side on a flat baking sheet, about 9×3 inches each. Score with a sharp knife or bread lame. Preheat the oven to a very hot 475°F (246°C). The extremely hot air will immediately set the crust so the bread rises up instead of spreading all over. To help ensure a crispier crust, after the oven pre-heats– pour boiling water into a baking pan on the bottom oven rack. Immediately place the dough inside and shut the oven door to trap the steam. The steam will help create that coveted crisp crust. If you have a dutch oven, shape the dough into 1 round loaf, and bake it inside the dutch oven with the lid on.

Bake until golden brown, about 20-25 minutes. Gently tap the loaves because if they sound hollow, they’re done.

Along with being so easy to make, the other reason I’m covering this is that it’s incredibly delicious bread! It’s as good if not better than bread from the bakery. The recipe makes two loaves and I ate a whole loaf the other day. My son loves it, although I’m sure he’ll get sick of it like everything else I make regularly. Making this bread makes this makes me feel like a good mom.

I’m publishing this Tuesday so you can make bread for New Year’s if you want. Your family will be amazed and if you live alone it’s a nice treat for yourself. I am evangelical about this bread! After making this I bought a baguette pan and a couche, which is French linen you put bread on to rise. (Can you tell I’ve been watching Great British Baking Show?) You don’t need any of that stuff to make this bread though.

I am terrible at taking photos of food and did a lazy job taking these pics thinking they were just for me, but this is the bread. It tastes better than it looks. My duck wasn’t burnt either! It was tasty I swear. Update: I made more bread and tried to make it pretty looking. 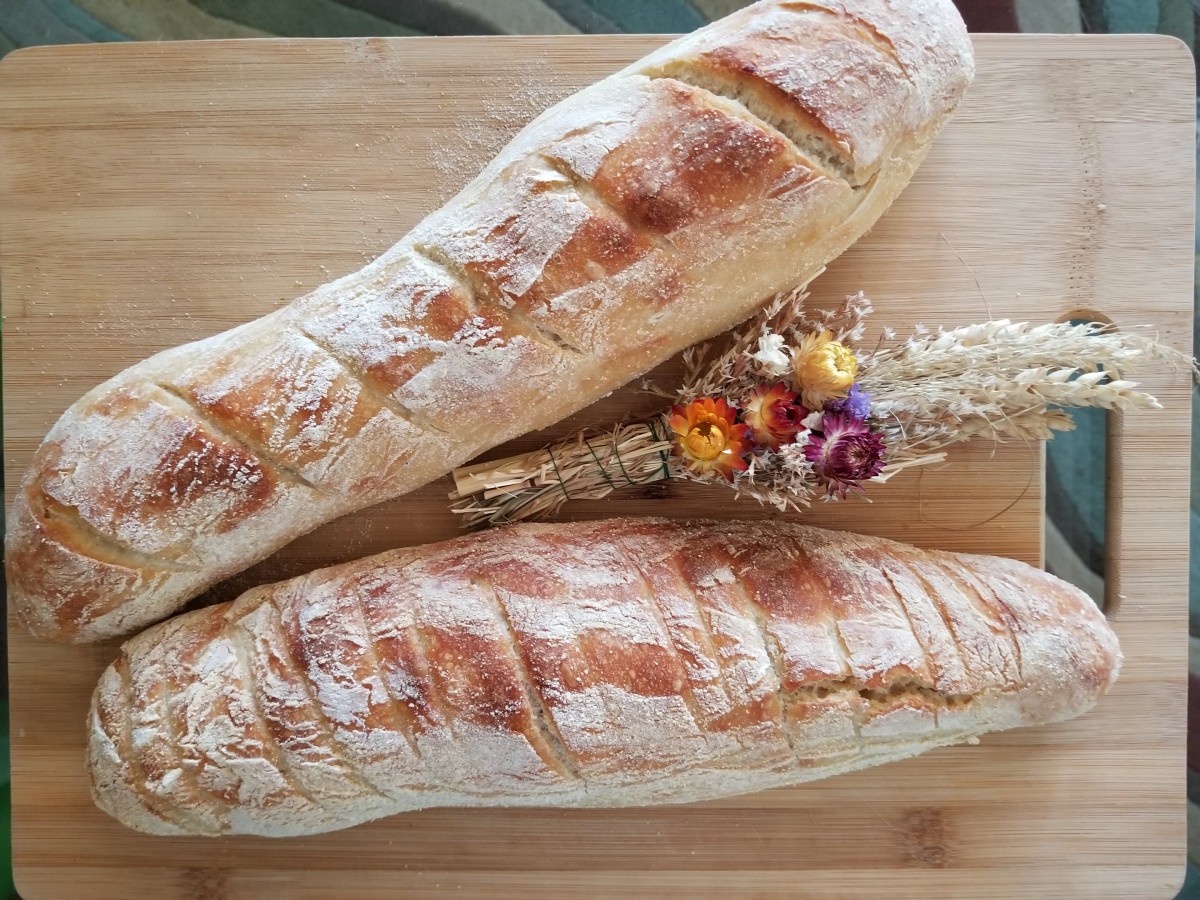 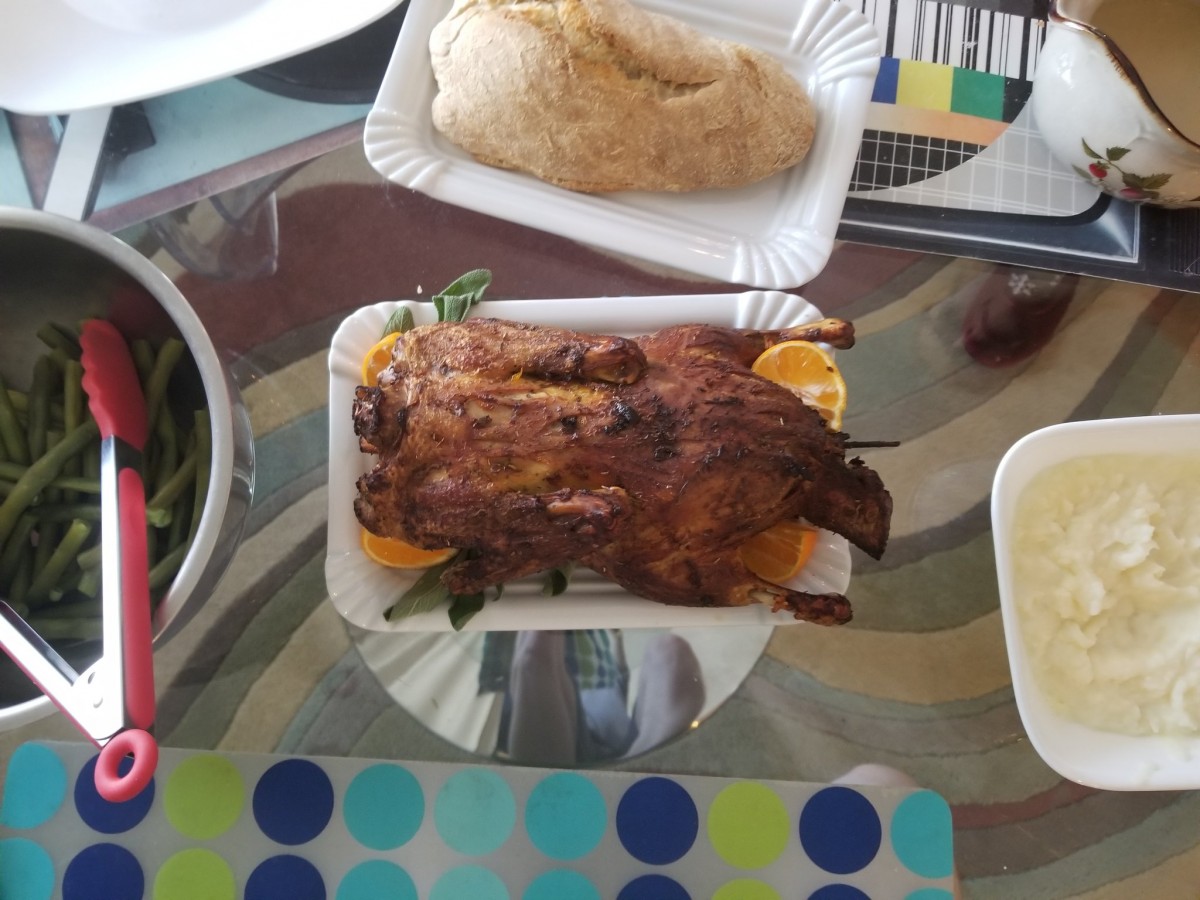 Here’s the video with instructions!