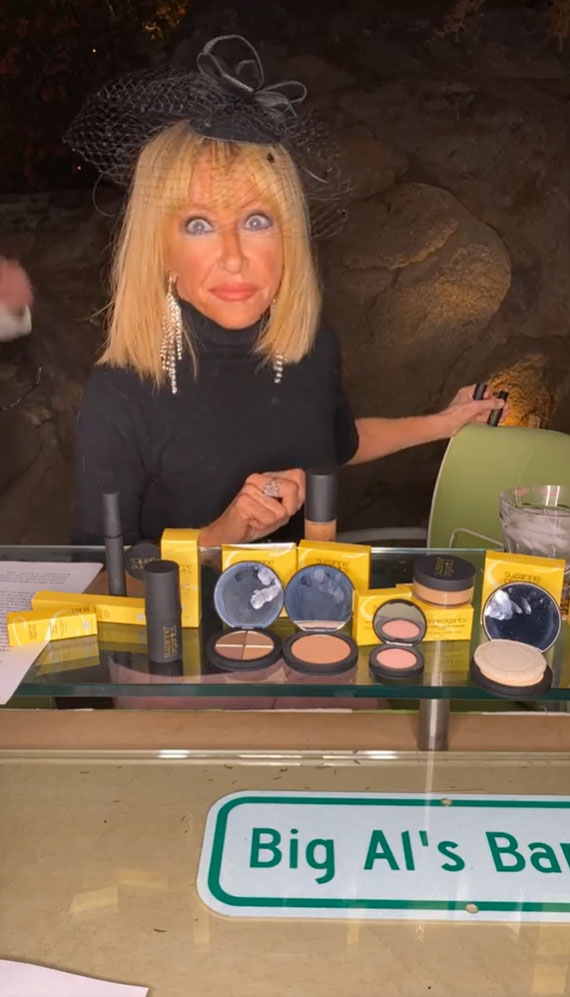 This Suzanne Somers story is equal parts funny and creepy as hell. Fortunately, the reason we can find humor in it is because A) it ends up okay and B) Suzanne is so composed, it puts you a little at ease. But when you break down events, it goes back to being creepy. Last Friday, Suzanne was filming her Facebook livestream, in which she sells her makeup line. This is the first time I have ever watched her show, so I assume this is the normal format. Suzanne and her husband, Alan Hamel, were at their Palm Springs estate. Both Suzanne and Alan are in great shape, but they are 74 and 84 respectively and Suzanne is a breast cancer survivor, remember. Anyway, they began their show by explaining that it was formal Friday, which is meant to explain why she was dressed like a mob widow and he was dressed like an extra from Miami Vice. They engaged in playful banter and often got sidetracked from their makeup discussion with whatever pops into their mind in that moment. About 40 minutes in, when Alan and Suzanne were quibbling over her lipstick application process, Suzanne said she heard someone. Sure enough, she turned to her left and saw a man she doesn’t know who has randomly, he claimed, wandered on to their property. Things got even weirder when the man said he was terrified because there were “ghosts following him.”

Suzanne Somers is speaking out after an unexpected visitor showed up at her Palm Springs, California, home on Friday night while she was in the middle of a Facebook Live session.

Around 40 minutes into the video, which sees her discussing various makeup products, the Three’s Company star stops abruptly and asks her husband, producer Alan Hamel, “Is somebody here? I just heard a person.”

Somers, 74, then invites the person over toward where she’s sitting because, as she says later in the footage, she thought he was a dinner guest who had arrived early. But she soon realizes he isn’t one of the individuals she was expecting — and “he barely had any clothes on,” as she later told Page Six.

The man is heard telling Somers he is “terrified” because there are “ghosts following” him. And after Somers politely asks him how he got there and tells him he shouldn’t be there, she adds, “You don’t scare me … but I’m not used to people being on our property.”

He then apologizes to the star, who calmly gives him directions back down the hill to exit their property and asks Hamel, 84, to show the intruder the door.

A few minutes later, the Step by Step alum says she “may cut [the broadcast] a little short, because … we may have to call the police.”

Somers told Page Six that the man was wearing “flip flops or a bathing suit, or a bikini,” and that her seemingly comedic wide-eyed glances at the camera were because, “I had a few hundred thousand people watching, and I wanted to keep them calm.”

[From People via DListed]

I went into this story/video knowing that there was an intruder involved and that Suzanne came out unscathed. Still, it calmed me to know that Alan was present in the beginning. The more voices I heard leading up to the guy’s arrival, the better I felt that there were reinforcements. Otherwise, I don’t know if I could have watched this all the way through. As Suzanne explained in the article, she first thought he was one of her invited dinner guests, but you can see in the video below the moment she realizes he is not and I felt that in my chest. Especially when he starts speaking about ghosts and how he entered the property as casually as he did. I’m sure his appearance in what sounds like a speedo assured her he didn’t have a weapon, but some whack-job in a speedo at that time of night is still pretty disturbing. I am so impressed how calmly but decisively she handled the situation. Honestly, Alan too. He was firm but didn’t rush in without assessing the danger the man posed.

Alan told Page Six that many times hikers don’t take enough water when they hike and get disoriented. He said they found the guy odd but not threatening. I get that from the audio and, it sounds like, from his appearance. Also, he did walk up and identify himself with a full name, which might have legitimately been his own. But I don’t think he was hiking in a speedo and flip flops, especially at that hour. And he didn’t just wander on to that property, he worked to get there so getting the police involved was a good call either for their safety or his, if he truly was disoriented. But here’s the part that brings me back to creepy – Suzanne and Alan have been trying to sell that Palm Springs property for a few years now. They’ve taken it on and off the market a few times. However, they just slashed the price and relisted it with a splashy new photo spread covered by many outlets just last week. 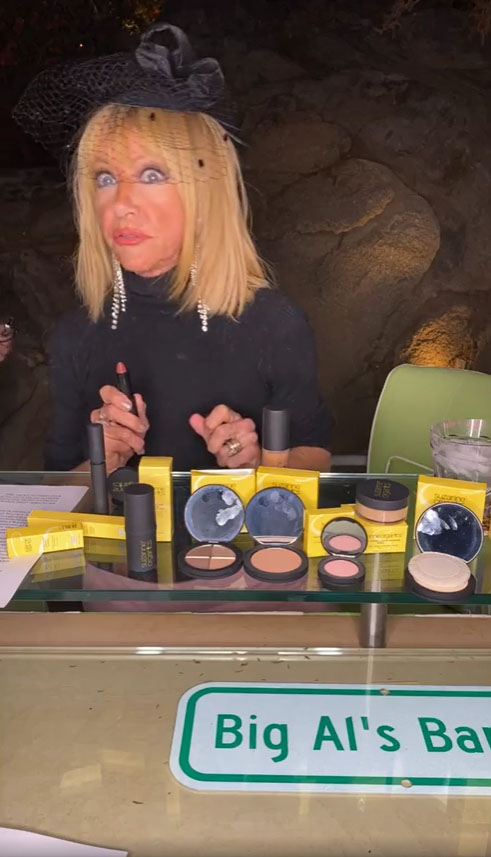