FKA Twigs on surviving abuse: ‘It’s pure luck that I’m not in that situation anymore’ 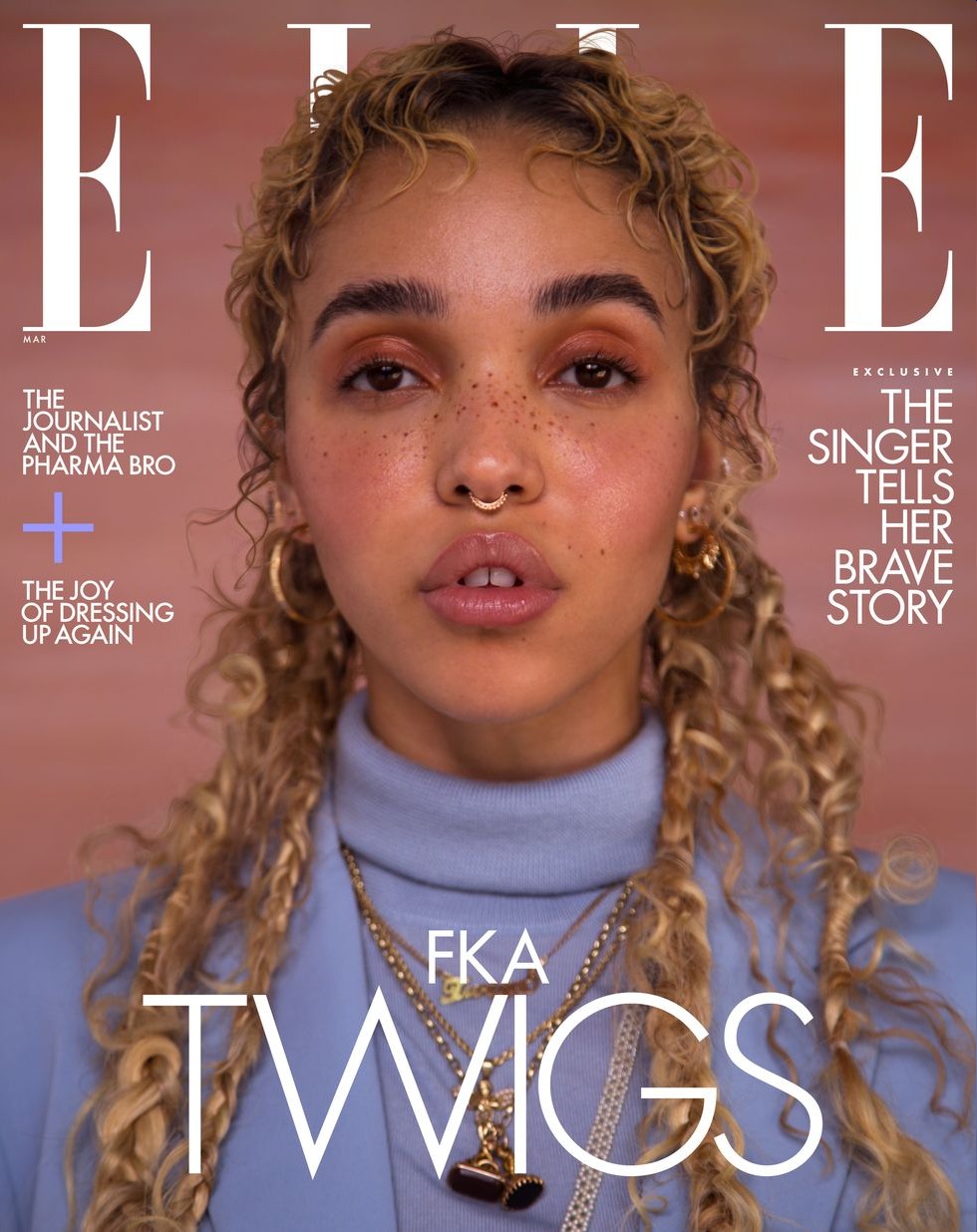 I have so much respect for FKA Twigs and what she’s doing right now. In December, she sued Shia LaBeouf for the months of physical and emotional abuse he put her through. The lawsuit was Twigs’ attempt to force Shia to change, but the lawsuit became a jumping off point for Twigs to speak to women affected by abusive relationships. She’s truly using her platform to educate and inform about intimate partner violence. She covers the latest issue of Elle to discuss her new music, but the bulk of the interview is devoted to abuse, violence, and how Shia love-bombed and groomed her as his victim. She talks in great detail about what he did and when, why she stayed and how she left. The entire piece is worth a read. Some excerpts:

Coming out of it alive: “It’s a miracle I came out alive. If you put a frog in a boiling pot of water, that frog is going to jump out straightaway,” she says, attempting to explain the incremental and insidious nature of the abuse. “Whereas if you put a frog in cool water and heat it up slowly, that frog is going to boil to death. That was my experience being with [LaBeouf].”

How did she survive? “I think it’s luck. I honestly wish I could say that I found some strength and I saw this light. I wish I could say, ‘[It is] a testament to my strong character,’ or ‘It’s the way my mother raised me.’ It’s none of that. It’s pure luck that I’m not in that situation anymore.”

It can happen to a woman with money & access: “People wouldn’t think that it would happen to a woman like me. The biggest misconception is, ‘Well, you’re smart. If it was that bad, why didn’t you leave?’ ” Her response: “It can happen to anyone.” And when the lockdown began, and she realized how many women were potentially stuck inside with their abusers, she got very anxious. “It made me realize I need to come forward and talk about my experience.”

Shia is a textbook abuser: “When I look at what happened with [LaBeouf], I think now the most frustrating thing is…a lot of the tactics the abuser will use are things that if I would’ve known, I could have spotted in the first month of my relationship.”

The love-bombing charm-offensive: “He would send me between 10 and 20 bunches of flowers a day for 10 days. Every time I would sit down to work or watch something, the doorbell would ring, and it would be another three bunches of flowers. On the tag, each time, it would say, ‘More love,’ ‘More love,’ ‘More love.’ ” In hindsight, she says, “It was a bit too much. It felt uncomfortable. I look back now, and it feels like really aggressive love.”

When the abuse escalated: “After I moved into his house, that’s when the abuse really escalated. I realized then I wasn’t just dealing with a tortured person who was going through a divorce. Or that outside factors in his life [were] making him act out on me. I was involved with an inherently abusive person…. I was very intimidated living with him. He had a gun by the side of the bed and was erratic. [I never knew what would] make him angry with me.”

Shia bragged about shooting dogs: LaBeouf would shamelessly brag about shooting stray dogs. He said it helped him “get into character” as a gun-toting henchman for his role in 2020’s The Tax Collector. Twigs was disturbed by this confession and questioned him. “I said to him, ‘That’s really bad. Why are you doing that?’ And he was like, ‘Because I take my art seriously. You’re not supporting me in my art. This is what I do. It’s different from singing. I don’t just get up on a stage and do a few moves. I’m in the character.’ He made me feel bad, like I didn’t understand what it was like to be an actor or to do this…Method [acting technique].”

He isolated her: “If you’re not talking to your friends or your family about what you’re going through, then there’s no one to regulate your emotions or affirm how you’re feeling. There’s no one to tell you that you’re in a dangerous situation.”.

People around Shia knew: “I’m not here to throw people under the bus, but I’d be lying if I didn’t say that there [were] people who were very close to him who knew exactly what was going on…. There [were] people who have worked with Shia that I openly spoke to about the abuse that I was going through. The reaction that I got [from his team] was pretty much, ‘Okay. Well, it’s Sundance.’ ”

There’s obviously so much more in just the Elle story, and there are still parts to Twigs’ story which she has chosen not to tell (which is her right). Towards the end of the relationship, Twigs also realized that Shia had given her an STD, something he knew he had and yet never disclosed. She details the horrific daily violence, but so much of what she’s still recovering from is the fact that he terrorized her emotionally and psychologically. Poor Twigs, and she’s so brave for doing this.

60 Responses to “FKA Twigs on surviving abuse: ‘It’s pure luck that I’m not in that situation anymore’”