Michelle Pfeiffer: ‘It’s easier to have a French exit these days than it was many years ago’ 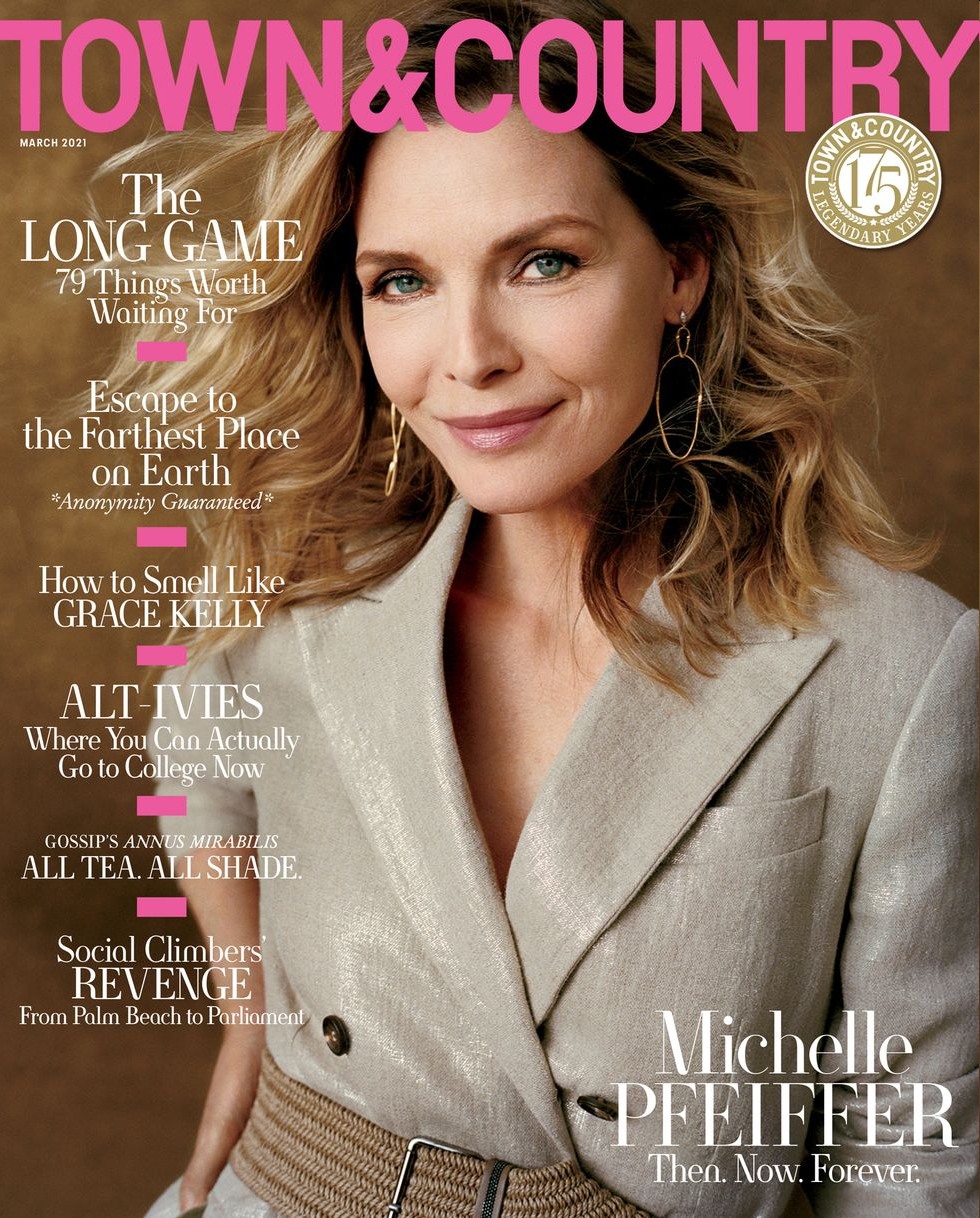 Michelle Pfeiffer covers the latest issue of Town & Country. She’s promoting French Exit, the dry-comedy about a formerly wealthy Manhattan social doyenne (played by Michelle) whose husband dies and she finds out there’s not much money left. She leaves New York and goes to Paris with her son and her cat. The term “French exit” means someone who leaves a social setting (a party, an event) suddenly, and without saying goodbye to anyone. I’ve read mixed reviews, but most critics love Michelle in her role. You can read the full T&C piece here – there are tons of quotes from Michelle’s coworkers, all of whom adore her. Some highlights:

She hates parties: “There’s a line in The Age of Innocence—I’m not sure if it’s actually in the novel or just in the movie—that says, ‘Americans want to get away from amusement even more quickly than they want to get to it.’ I’ve been doing that my entire life.” Take, for example, Pfeiffer’s own 40th birthday. “Somebody threw a party for me, and it was just the worst evening. I have an eclectic group of friends, and they don’t necessarily gel, so I felt responsible—Why aren’t they talking? Are they not having a good time? I felt responsible, and I think that was the last party I ever had.”

On French exits: “I didn’t realize that there was something called a French exit until I read this script. And it’s something I do, so it made me feel better that this thing actually has a name.”

On her filmography: “Some of the performances I have felt the best about are ones for which I’ve gotten panned. The ones that make me cringe are typically when I got the best reviews. I saw Scarface and I went, ‘Eh, I’m okay.’ I rarely like my work. I only look at films once. It’s just too painful.”

Taking time off to raise her kids: “Before the kids were born, my work was my life—and it was in a good way. When they were small, I could just pack them up and bring them with me. But then it became, ‘Okay, how long will this separate the family unit?’ When they got into school it became even more complicated, because I didn’t want to just take them out of their routine, so I would shoot in the summer and tried to not be away for more than two or three weeks at a time. It became challenging for people to hire me, because it was too complicated. It was easier to get somebody else to do the part.”

When she was staring at her empty nest, she returned to work: “I realized my daughter was looking at colleges, and I saw the writing on the wall. I thought, This is going to hit me really hard. It’s time for me to get back into moviemaking.” It wasn’t quite so simple. “Your seat is never saved in this industry. It’s very competitive. There’s that transition time when you’re not the ingenue and you’re not really old enough to be the grandmother—you’re not old enough to play Frances. I’m at an age when the parts are getting more interesting again for me. I guess the timing of it really worked out, because I don’t feel I missed out on much.

[From Town and Country]

Because Michelle was pretty lowkey about taking time off to raise her kids, I feel like the American public didn’t even realize how long she was away, or how she was barely even doing one film a year for a while. Like, she never made a big announcement of “I’m semi-retiring!” or “I’m back now!” I bet she was still getting scripts in those years too. Anyway, I love Michelle. I’m happy that she’s back to working somewhat full-time, and that Hollywood never stopped embracing her and her talent. She’s great. And I didn’t know it was called a “French exit” either. What’s an American exit? What’s an Indian exit? Hm. And I dislike parties too, unless I’m the host (which is historically super-rare). And even then, it’s like Michelle says – I’m stressed about people not having a good time.

50 Responses to “Michelle Pfeiffer: ‘It’s easier to have a French exit these days than it was many years ago’”