Jane Fonda accepted the Cecil B. DeMille award, called out lack of diversity by the HFP


Embed from Getty Images
Jane Fonda accepted The Cecil B. DeMille award last night at the Golden Globes. She was wearing a phenomenal white pantsuit by Richard Tyler. That stripe down the side is everything. I fell asleep for a couple minutes during her speech because there’s something comforting about Jane and it was way past my bedtime. Watching it this morning I was struck by how many shows she name dropped. Jane loves movies and television and it shows.

She’s also a committed activist who has worked her whole life toward important causes. Jane has consistently been a good ally, and she called on the industry to elevate diversity. This was especially important last night, when films and series by people of color were overlooked by The Hollywood Foreign Press, which is entirely white! There is not one Black journalist on their 87 member panel. This issue kept being brought up during the show, and while that’s good it falls short in so many ways. Jane mentioned many of the nominated films and shows and she also talked about I May Destroy You, Michaela Coel’s HBO series which was notably snubbed by the HFP. Here’s the part where she mentioned elevating Black voices:

There’s been a story we’ve been afraid to see and hear about ourselves in this industry. A story about which voices we respect and elevate and which we tune out. A story about who is offered a seat at the table and who is kept out of the rooms where decisions are made. So let’s all of us make an effort to expand that tent so that everyone rises and everyone’s story has a chance to be seen and heard. Doing this simply means acknowledging what’s true. Being in step with the emerging diversity that’s happening because of all those who marched and fought in the past and those who picked up the baton today. Art has always been not just in step with history but has led the way. So let’s be leaders.

I love her and I’m so glad she was honored! 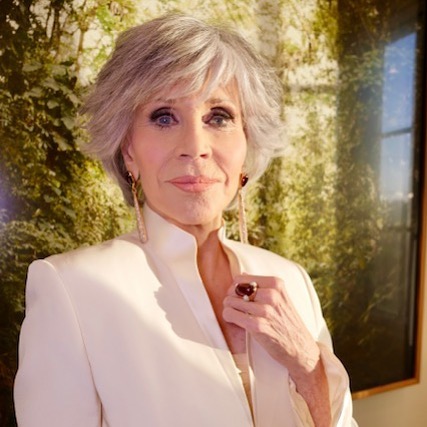 9 Responses to “Jane Fonda accepted the Cecil B. DeMille award, called out lack of diversity by the HFP”