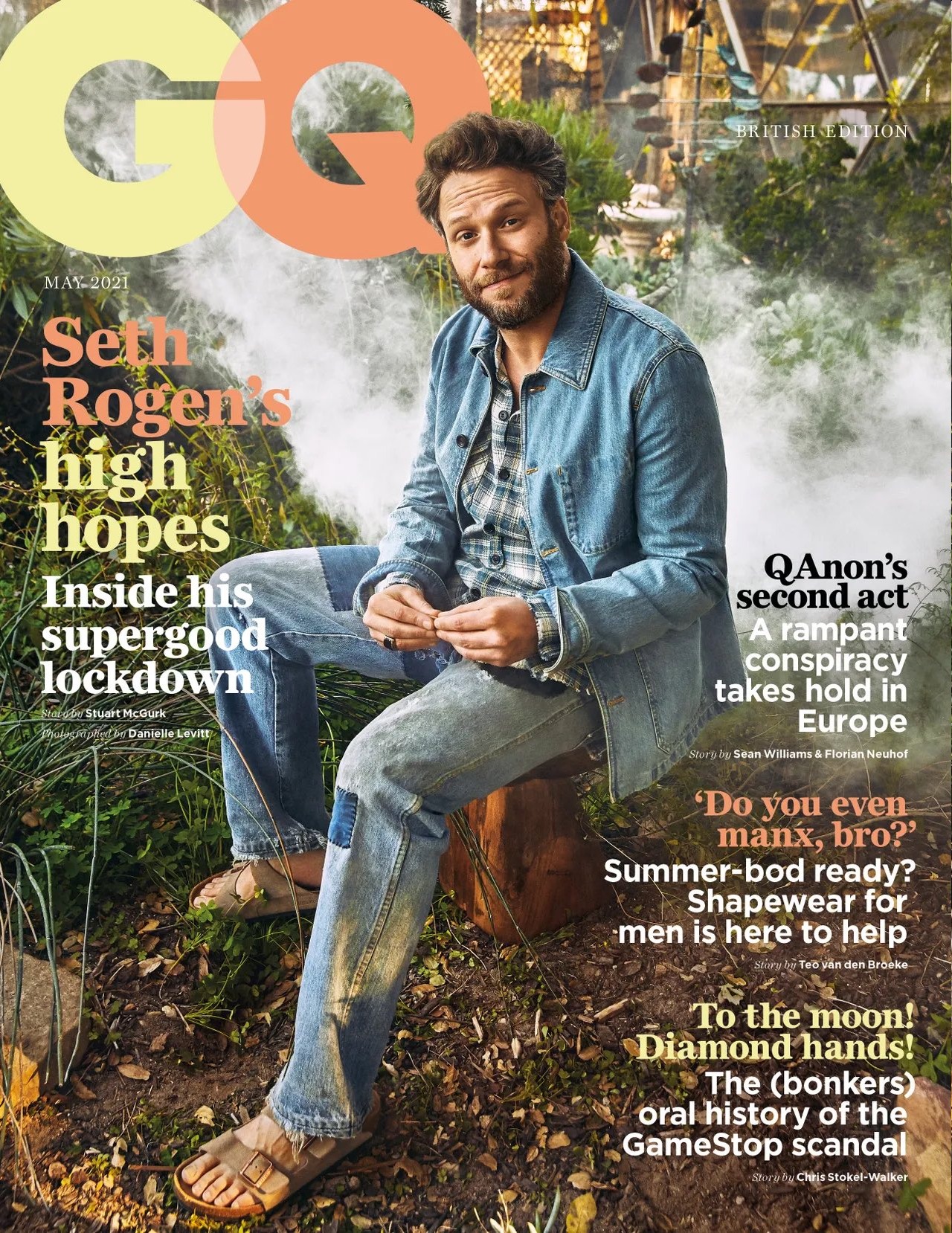 Seth Rogen covers the latest issue of British GQ to promote his new memoir, Yearbook, and his latest business, Houseplant, which sells weed and weed-accoutrements, like specialty joint ashtrays and lighters. The GQ piece is really funny, and there’s a lot of the piece devoted to the fact that Rogen has had a “perfect pandemic.” He stays home with his wife, he smokes weed all day, he does all of his work via Zoom, phone calls or emails, and he spends hours relaxing as he does pottery. They get takeout, watch movies and old TV shows and he’s the happiest he’s ever been. You can read the full British GQ piece here. Some highlights:

The goal of his book is to demystify weed culture: “Honestly, in many ways, that was the biggest thing to overcome in my head: to demystify what a book was and what it meant to people. And I wanted to frame it as entertainment and not, like, a deep look at how Seth Rogen came to be.”

How he feels about the North Korea/The Interview debacle years later: “Well, mainly that a lot of comedians have the sense they are embroiled in some sort of, quote-unquote, controversy, but none of that was controversial. They’ve experienced hypothetical controversy of people getting mad at them on Twitter. The president didn’t hold a press conference about their controversy. There weren’t books and documentaries and classes in universities dedicated to the fallout…[but] I’m still allowed to work. People still pay me to make my films. People still finance them.”

On his weed & weed-accessory business, Houseplant: “As someone who smokes weed all day, every day, I think I was really longing for objects that were made for me.” Unwittingly, he’d been researching this his entire life. Why weren’t people making a lighter the size and heft, for instance, of a brick, which even the most committed stoner could never mislay? “You want a lighter that’s a fixture,” says Rogen. Houseplant made the “impossible-to-lose” block table lighter, which could also kill a man. Why couldn’t the packaging be beautiful? They put their weed in pastel tea caddy-like canisters. Why had no one even considered selling vinyl LPs with a mix of songs geared to each strain? “It was one of those things where the deeper you go, the more you realise that no one has dug that well before.”

He doesn’t get why people stigmatize weed: “People don’t stigmatise shoes. People don’t say they make walking any less ‘real’. We need them for the ground we walk on! I wear glasses. We need gloves. We need houses. We’ve done a millions things to compensate for the fact that we just do not thrive in this place, you know?” What would it be like for him, I wonder, to go without? “It would be like saying you can’t wear clothes any more. It would be a real bummer! It would make it really hard for me to do what I need to do in the world.” It also helps, he says, with his low-level Tourette’s and OCD, both of which are more pronounced in his father. And it’s here, he feels, that the real stigma behind weed lies. “The only stigma with weed is because it affects your brain. And people are just weird about it. They don’t like talking about brain health.”

He barely drinks anymore but easily smokes 10 joints a day: “Once I grew more comfortable with doing other drugs that were more stigmatised and not worrying about damage in terms of anyone’s perceptions of me, there was just a point where I realised I just need to be comfortable doing a quarter tab of molly [MDMA] at this party and not drinking and having a much better time. Or eating a tiny bit of shrooms at this thing or having a [weed] lollipop. The next day I don’t have a hangover. I’m not throwing up. It’s just much better for me… Truly, you would be better off doing a hit of acid than drinking.”

He loves doing pottery. “I just found it incredibly gratifying to create things that you could touch and interact with.” Just before lockdown, as everyone was panic-buying toilet rolls, the potters of this world, says Rogen, were doing the same with clay. “There was [a shortage] at first – but we made an illegal back-door clay purchase….[Pottery] makes you very present and focused on whatever it is you’re doing at any given moment. It’s hard to dwell on other things when you’re doing pottery.”

For about two years in college, I smoked a lot of weed. Like, I smoked on a daily basis. And I did feel it – I felt really foggy and lazy, and then I started getting super-paranoid whenever I smoked. I think I would genuinely enjoy it more now, twenty years later, you know? But even then, I would struggle to function if I smoked more than one or two joints an evening or took more than a few hits off a bong. I would imagine it would help me sleep though! But that’s my brain chemistry – obviously, for Seth, it takes the edge off. I don’t know about the MDMA and sh-t though. Also, I enjoy that Seth has researched his niche market of lighters and ashtrays and such. I imagine Houseplant will do *very* well.

I made these vases. pic.twitter.com/gAthF3ipPZ