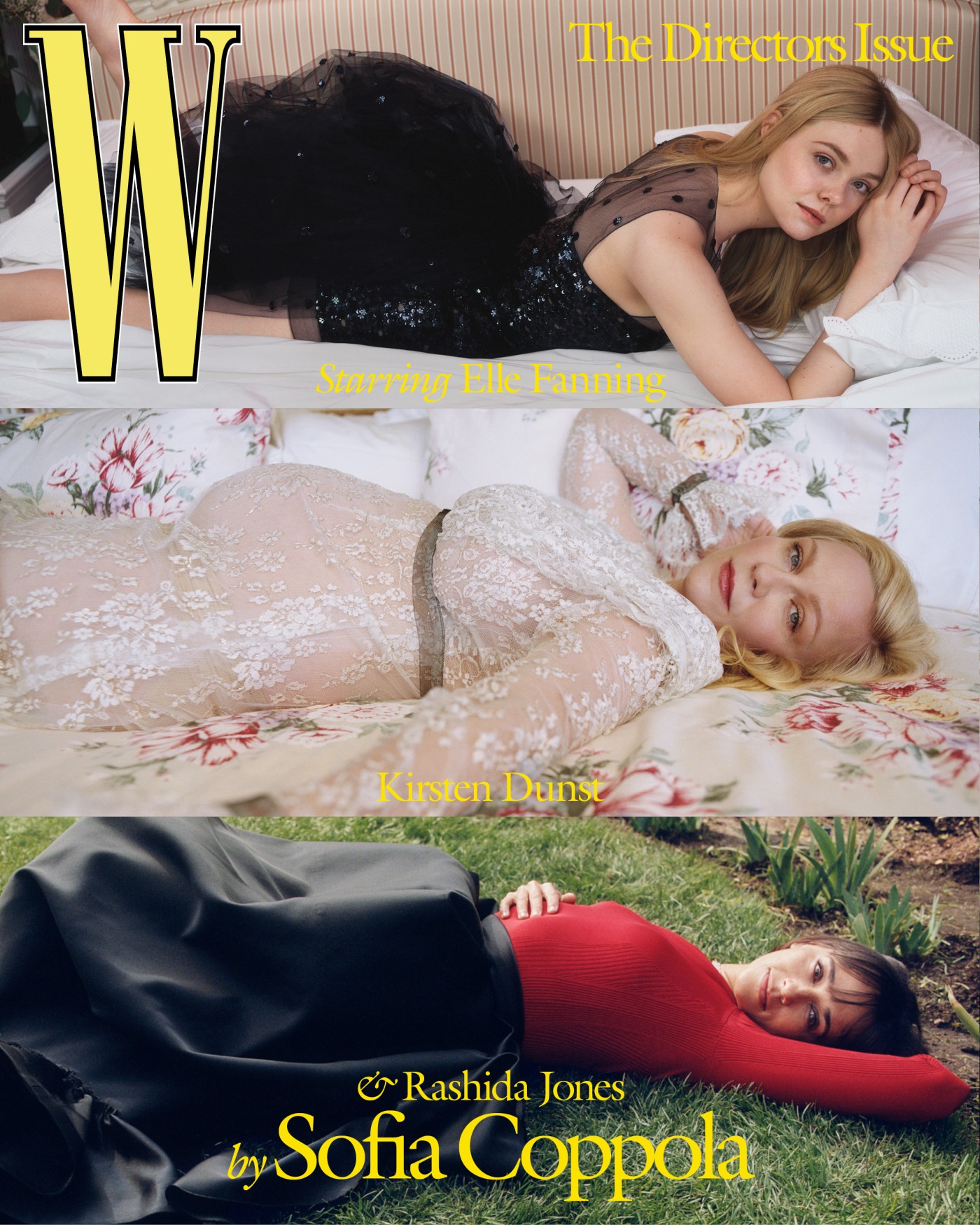 Kirsten Dunst is knocked up again! And she announced her second pregnancy in a very “Kirsten Dunst” way, by posing for W Magazine with her nice-sized bump. Kirsten is still with Jesse Plemons, and they got married at some point, I think sometime after they welcomed their first child, a boy named Ennis Howard Plemons. They met on the first season of Fargo and got together shortly after filming was completed. Kirsten has never made it a secret that she wanted to “settle down” with a husband and children, and I love that she made it happen with Meth Damon. As you can see, the W Magazine cover is for their “Directors Issue,” and there are multiple covers. This one was with Sofia Coppola “directing” three of her muses, Elle Fanning, Kiki and Rashida Jones. Here’s the part about Kirsten’s pregnancy:

Kirsten Dunst is pregnant with her second child. She made the announcement in W magazine’s Directors Issue, out today.

The actress appears in a photo story conceived by her longtime collaborator Sofia Coppola, who looked to the opulence of 1980s society hostesses as inspiration for the shoot. In one image, Dunst is swathed in a lavender Valentino dress; in another, she’s clutching the fabric on a hot pink sleeveless Armani Privé frock. But the look that opens the story makes the biggest impact: Dunst is shown reclining on an ornate bed wearing a custom dress by Rodarte, a considerable baby bump peeking out from the lace design by Kate and Laura Mulleavy. (The designers are good friends of Dunst’s—in fact, she announced her first pregnancy by appearing in a photoshoot for the brand’s 2018 look book while carrying her now two-year-old son Ennis.) The bespoke piece Dunst wore for the shoot is based on a similar silhouette she wore back then—something her mother reminded her about, knowing it would fit her body’s current shape.

Dunst, who is married to her former Fargo costar Jesse Plemons, appears in the story alongside Elle Fanning and Rashida Jones, all of whom wearing the high fashion looks we’ve missed while spending the year in sweatpants. On set, Coppola and the photographer Zoë Ghertner encouraged Dunst to pose draped across the carpet—a logistically hairy activity for someone who’s expecting.

“Every shot was on the floor,” Dunst joked to W, in the story that accompanies the spread. “I was like, ‘I can’t get up.’ I felt like Urkel.”

“I felt like Urkel” should be the quote included in all pregnancy announcement stories from now on. When Hilaria Baldwin invariably gets knocked up again, she too will feel like “El Urkel.” Anyway, I’m very happy for Kirsten and I think she’s happy as a clam these days. Adoring husband, cute kid and another baby on the way.