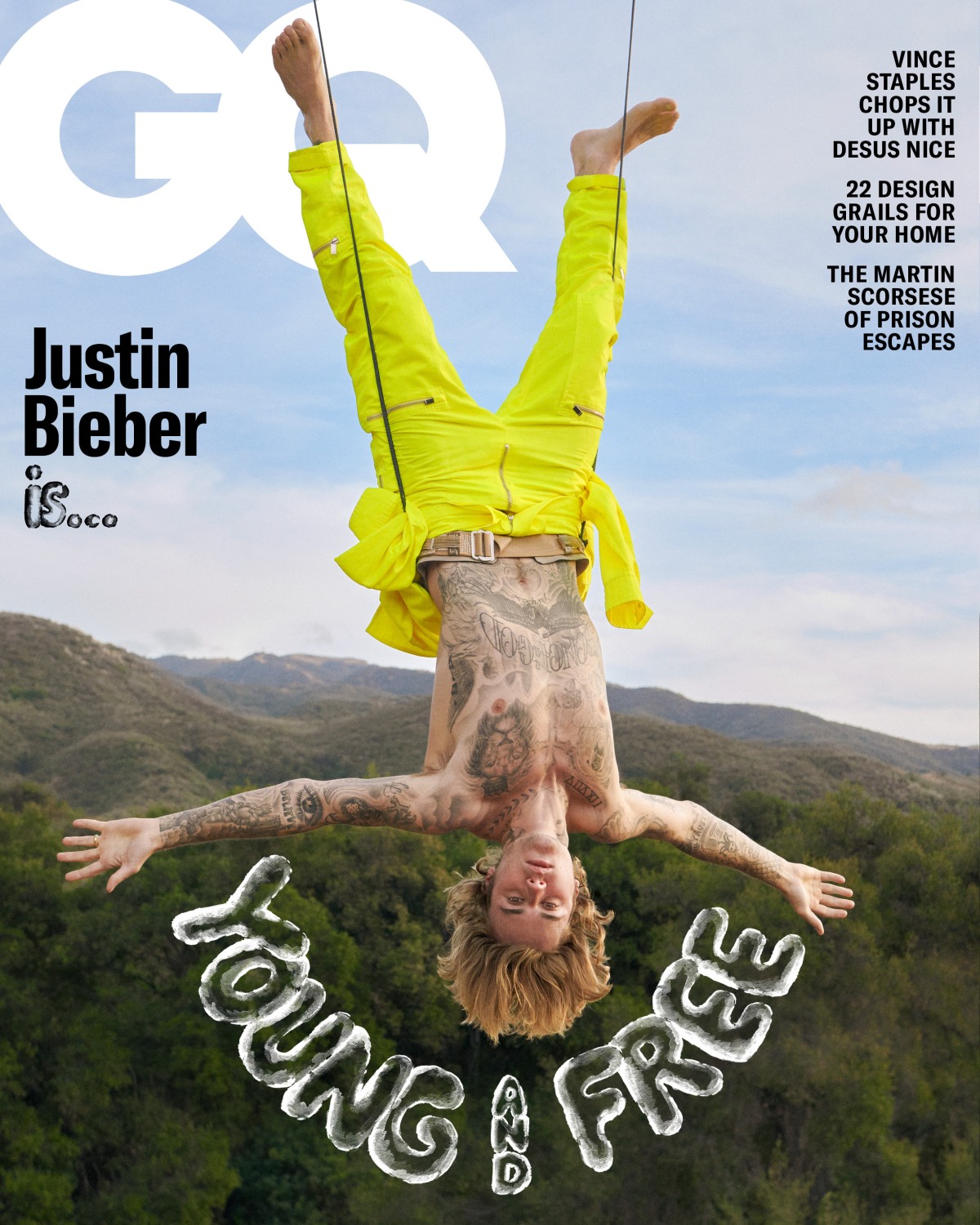 A tattoo-lover once told me that Justin Bieber has good-quality ink and I think about that every time I get a good look at his tattoos. While I do think some of his ink is good quality, the sheer quantity of it is just… a weird look for Justin in particular. Justin covers the latest issue of GQ in what the online edition calls “The Redemption of Justin Bieber.” He speaks at length about his new album, Justice, his marriage to Hailey Baldwin, his sober journey and his journey with his faith. He sounds like a man who has gone all-in with several 12-step programs all at once, but it’s not a bad thing. He’s become very earnest, very raw. I wasn’t looking forward to reading this but once I sat down and actually went through it, I appreciated him a bit more. You can read the full piece here. Some highlights:

How did he come out of the damage intact? “I’ll answer as best I can… Hurt people hurt people—you know? And there’s a quote; I’m trying to remember it. I don’t know if it’s biblical, if it’s in the Bible. But I do remember this quote: The comforted become the comforters. I don’t know if you’ve heard that before. But I really do feel comforted. I have a wife who I adore, who I feel comforted by. I feel safe. I feel like my relationship with God is wonderful. And I have this outpouring of love that I want to be able to share with people, you know?”

He won’t let his past dictate his future: “I don’t want to let my shame of my past dictate what I’m able to do now for people. A lot of people let their past weigh them down, and they never do what they want to do because they think that they’re not good enough. But I’m just like: ‘I did a bunch of stupid sh-t. That’s okay. I’m still available. I’m still available to help. And I’m still worthy of helping.’ ”

Where he was five years ago: Bieber was at a low point in what was supposed to be a charmed life; at night, he says, his security guards began to slip into his room and check his pulse to make sure he was still alive. “There was a sense of still yearning for more…It was like I had all this success and it was still like: I’m still sad, and I’m still in pain. And I still have these unresolved issues. And I thought all the success was going to make everything good. And so for me, the drugs were a numbing agent to just continue to get through.”

Finally dealing with his physical & mental health: “To be honest, I am a lot healthier, and I did have a lot of things going on. I did have mono, and I do have Lyme disease. But I was also navigating a lot of emotional terrain, which had a lot to do with it. And we like to blame a lot of things on other things. Sometimes… It’s a lot of times just your own stuff.”

He felt “compelled” to marry, he says. “I just felt like that was my calling. Just to get married and have babies and do that whole thing.” (On the “babies” part of that: “Not this second, but we will eventually.”) Bieber is honest about the fact that his marriage has not always been easy. “The first year of marriage was really tough because there was a lot, going back to the trauma stuff. There was just lack of trust. There was all these things that you don’t want to admit to the person that you’re with, because it’s scary. You don’t want to scare them off by saying, ‘I’m scared.’ ”

On God. “He is grace. Every time we mess up, He’s picking us back up every single time. That’s how I view it. And so it’s like, ‘I made a mistake. I won’t dwell in it. I don’t sit in shame. But it actually makes me want to do better.’ My goal isn’t to try and persuade anybody to believe in what I believe or condemn anybody for not believing what I believe. If it can help someone, great. If someone’s like, ‘Hey, I don’t believe that. I don’t think that’s true,’ by all means, that’s their prerogative.”

Vaguely addressing Hillsong and disgraced pastor Carl Lentz: “I think so many pastors put themselves on this pedestal. And it’s basically, church can be surrounded around the man, the pastor, the guy, and it’s like, ‘This guy has this ultimate relationship with God that we all want but we can’t get because we’re not this guy.’ That’s not the reality, though. The reality is, every human being has the same access to God.”

He enjoys meetings now. “I have meetings now, which I was never very good at. But now I’m like, ‘Okay, in order to be a healthy individual, this is what healthy adults do. They have schedules, they have calendars, they go by their calendar,’ and it’s beneficial, right? It’s not that it’s rocket science. But for me it’s like I lived this crazy lifestyle and this was just not the norm.”

I’ve covered a lot of interviews from giant celebrities and rock stars and from what I’ve seen, the men always get to the point where they exoticize “normalcy.” They meet someone and they realize, “oh, I could have a real home and a wife and a real family life and we could have dinner with each other every night” and it comes as some big revelation to them. That’s part of Justin’s journey – he was living on the road, he was doing drugs constantly, he didn’t have real friends and Hailey represented the life he wanted for himself, a more fulfilled life, a normal life (for him).

Photos and cover courtesy of GQ.