Pink: most of the time you can’t ‘have it all,’ it feels like climbing Everest 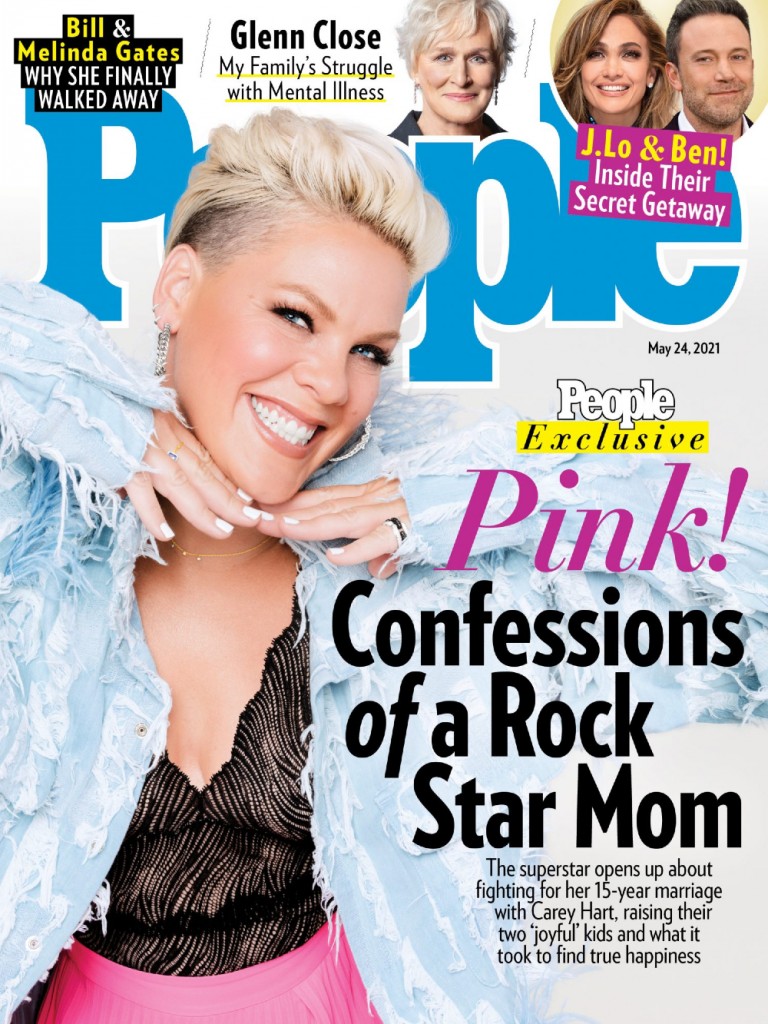 Pink has an exclusive interview in People to promote her upcoming documentary on Amazon Prime, P!nk, All I Know So Far. It begins May 21. The doc chronicled her Beautiful Trauma Tour, showing how Pink performed a massive multi-city stadium tour with her entire family traveling with her. When she spoke to People, Pink said that she didn’t really know if a woman could have it all, work as a rock star and be a mother full time, but she was doing it. She admitted that much of the time she feels like she is “climbing Mount Everest.” However, she wouldn’t have it any other way because as Pink sees it, “even the hard days are a blessing.”

Pink is opening up about her life as a rock star mom.

In this week’s PEOPLE cover story, the three-time Grammy winner, 41, gets real about raising daughter Willow, 9, and son Jameson, 4, when she’s on the road with her motocross racer husband Carey Hart, 45.

“There’s not a lot of women headlining stadiums and doing two nights at Wembley Stadium while having a family on the road. [Director Michael Gracey] had never seen a mom changing diapers while having a creative meeting, and just the way that this big life intersects with being a normal, crazy family — there’s something fascinating about that,” Pink tells PEOPLE.

“I’m always trying to figure out: ‘Am I doing the right thing? Can a woman have it all? What does that even mean?’ And the answer is no, most of the time you can’t, and it feels like you’re climbing Mount Everest,” she says. “But it’s also so magical what I get to do and who I get to be in this life.”

“Touring with kids is impossible — and I did the impossible. For a while there were a lot of other pop stars that were emailing me and calling me for the playbook on how to tour with kids, so I wrote a playbook for other moms,” she says. “You just keep going. I’m just thinking about: ‘Am I raising a kind person? What’s it like to be my kid?’ ”

“Their normal is different: We go on tour and have a ball pit in Mommy’s dressing room. But they are normal kids. Jameson wants to be an astronaut,” she says.

“Willow does gymnastics and reads Harry Potter and is convinced she’s going to Hogwarts when she’s 11, and I don’t have the heart to tell her that she’s not.”

“They’re totally weird and joyful, and I’m loving every moment of it,” Pink says of parenting. “Even the hard days are a blessing.”

Every mom has a different experience. I think it’s important to talk about it because someone is sitting in their corner of the world, not knowing if they are the only one feeling that way. I am genuinely happy Katy Perry is fulfilled as a mother, as I am for any person who feels fulfilled in their lives. I do not identify with Katy’s feelings, but I don’t have to in order to be happy for her. I do understand Pink’s Everest comments. That’s something I’ve been through repeatedly. But even with Pink, I can’t identify with finding the hard days a blessing. I’m not the same kind of mom Pink is. So we don’t have to look at motherhood the same way. I love that she loves every minute with her “weird and joyful” kids.

I like the way she explained that her kids “normal is different.” When your parents travel the world to entertain or compete, life is not going to resemble most other kids lives. But that really just means those kids get a different set of stories. I think as long as Pink and Carey embrace that, they don’t have to worry so much about whether they are doing everything “right.” This is right for their family. Their kids appear, as she said, joyous. Their needs are met, Pink and Carey are attentive, if not oversharing, parents. I think as long as she keeps that up and keeps asking herself the hard questions, she’ll be fine.

13 Responses to “Pink: most of the time you can’t ‘have it all,’ it feels like climbing Everest”