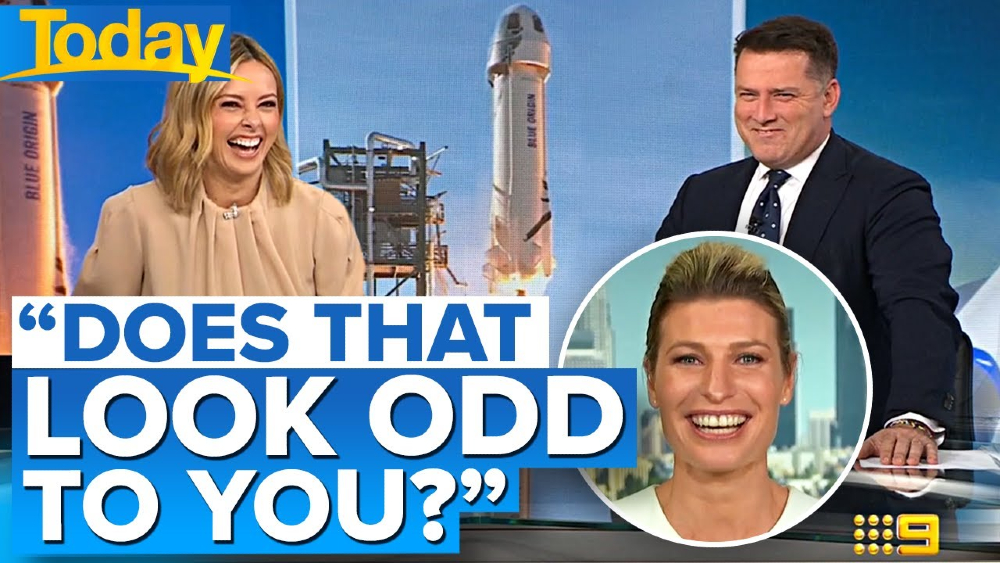 Earlier this month, we talked about the race between Richard Branson, Jeff Bezos and Elon Musk to see which billionaire could get into space first. All three men announced they’d planned civilian flights aboard their own spacecraft at various points this year. Once confirmation of their flights came through, Branson and Bezos further wowed their crowds by announcing they, themselves, would be aboard those flights. It looks like Bezos and Blue Origins won the first round, as Branson will not make his July 4 target date to shoot into space. And what screams “I’m The Man” more that rocketing yourself into the atmosphere in a giant penis-shaped device that costs billions and naming it New Shepard? None of this was lost on Australian morning show hosts Allison Langdon and Karl Stefanovic. While covering the Bezos launch story for the Today Show, the hosts couldn’t take their eyes off the giant steel phallus behind them. While Allison attempted to carry on, Karl wouldn’t allow it, choosing instead to ask if anyone else thought it looked “a little odd”. The two finally acknowledged the elephant in the room and gave in to the giggles:

I mean, come on! It couldn’t look any more like a shvantz. I, too, gave a hoot when I saw that thing. We keep referring to this showdown between Branson, Bezos and Musk as a “d*ck wagging contest,” so this is seems like the predictable outcome. I want to believe that when Bezos met with the Blue Origins engineers, they took that into consideration. Like, they gave some fancy science speak as to why it needed that specific cap on top or the cylinder needed to look just so, but in reality, they just wanted to help Bezos broadcast his true message for everyone to see.

As for the Today hosts, I love their reaction. Even when they cut to their correspondent in American, Alison Piotrowski, she can’t keep a straight face. Meanwhile, there’s the Bezos voiceover of him saying how he’s always wanted to go to space, attempting to sound inspirational and falling short of coming across as genuine about anything. They cut back to all three hosts barely keeping it in check, which honestly, is absolutely the best reaction to Bezos after he whipped his Blue Origin New Shepard out to impress the world. Oh, BTW, you, too, can ride this giant metal monster for a current bid of $3.6M.

I hadn't ever seen blue origins rocket till today but it looks like a very satisfying ride pic.twitter.com/3ICea1vj46