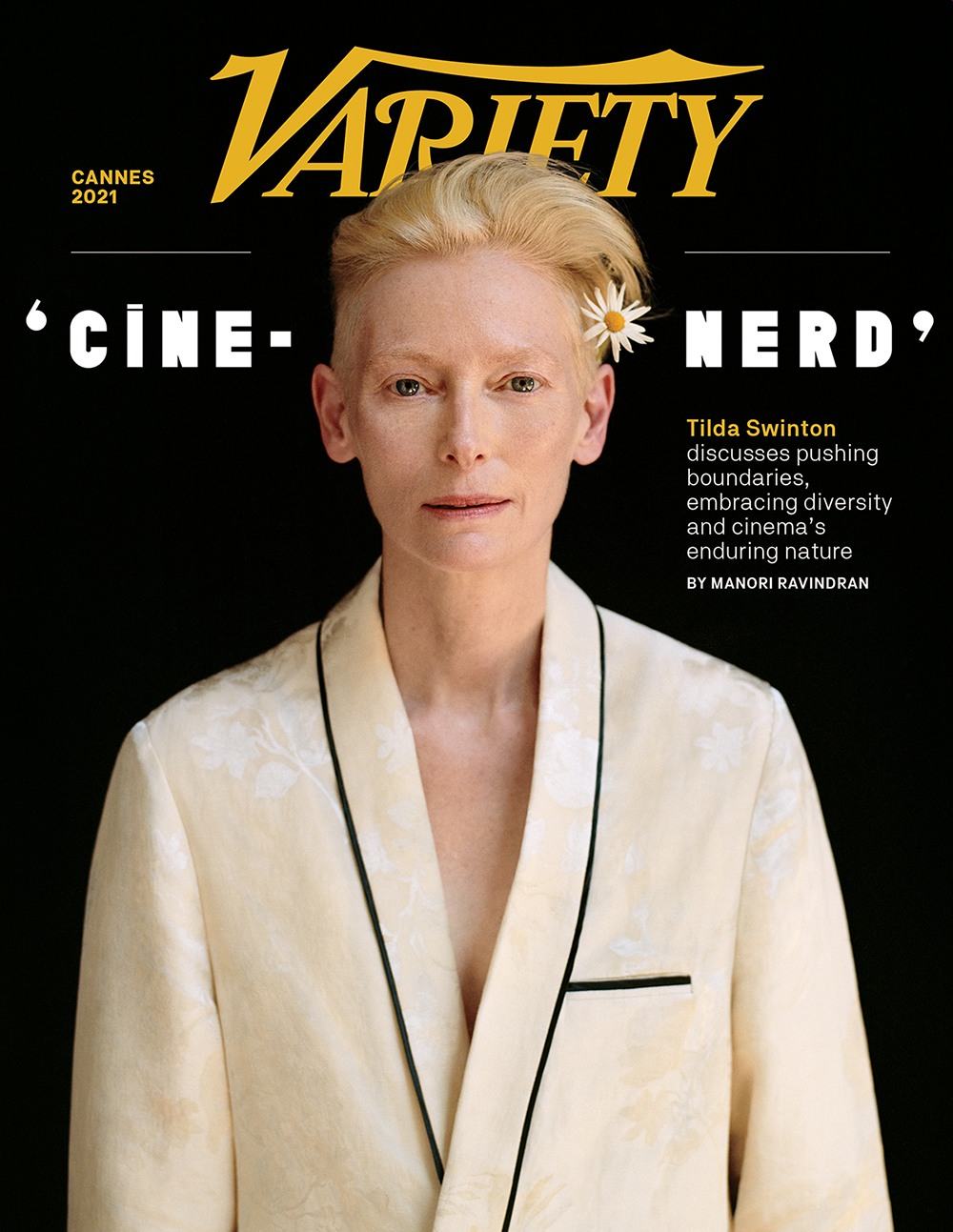 Tilda Swinton covers the latest issue of Variety to promote her five (!!) films premiering at this year’s Cannes Film Festival, which was pushed back from May to July. I like Tilda a lot, I enjoy her as a person and as an actress, but even I have to admit that Tilda has some giant blind spots when it comes to race and her own privilege specifically. One could argue that her heart is in the right place, and for what it’s worth, I respect the fact that she has continued to address issues of race and privilege for years following the Doctor Strange/Margaret Cho catastrophe. But holy hell, she definitely is an aristocratic white woman who tends to shrug off having any kind of self-awareness about her own privilege. You can read her full Variety piece here. Some highlights:

Working with Wes Anderson: “The people he invites are so spectacular. It’s not always a great thing that people look like they’re having quite as much fun as we are. One should maybe try and tone it down a little.” Swinton describes “The French Dispatch” as a “love letter to American internationalism” and journalists like James Thurber, Rosamond Bernier and James Baldwin. “I was hanging out with the Fonz!” she says of Henry Winkler, who plays one-half of the “Uncles” in the movie, alongside Anderson regular Bob Balaban. “They were there in their homburg hats every day, and we just sat at their knee and had such fun. There is always a surprise.”

She doesn’t like working on streaming projects or TV: “I’m a cine-nerd. I’m really, really, really devoted to the cinema, and this is another thing that makes me so happy about the prospect of Cannes. These films that I’m privileged enough to be taking are cinema films — they were not made for television. It’s not like something going down a drain, and the screens get smaller and smaller, and then you disappear forever. We’re just in a sort of flux at the moment, and it’s all transitioning. The pandemic came along, and our relationship with live cinema shifted — we got a little screwed. But we’re not settled yet.”

Would she work with the streamers again? “I’m devoted to the big screen. And to be honest, the more it’s under scrutiny, or I feel that it’s not being valued highly enough, the more devoted I am to it. So I wouldn’t hold [your] breath.” What we really need, Swinton muses, is for streamers “like Netflix, who tell us avowedly that they are dedicated to big-screen cinema and filmmakers, to put some of that incredible wealth into building, developing and resuscitating great cinemas in every city on the planet that they rule.”

How Kevin Feige admitted that they should have done her Doctor Strange character differently: She is “very, very grateful that he said that. I remember at the time having a question mark in my own mind, and being attendant to the public response to the idea that a Scottish woman will be playing this character, and being aware that there was no resistance at all — there was widespread welcome — which shifted at a certain point, for very good reasons with which I had an enormous amount of sympathy.”

Reflecting on the Margaret Cho episode: “I made a questionable decision to reach out to somebody in a certain way, which was naive and clearly confusing, because their misunderstanding came about because of it. I was embarrassed that I had maybe gone up a blind alley in starting the correspondence in the first place — maybe I had confused matters — but beyond that, I have zero regrets.” Nonetheless, it was a “hot moment,” she admits. And for some, those moments are hotter than others. “But the way in which people get listened to is by speaking up and getting hot. And sometimes, it needs to get messy.”

On cancel culture: She is disappointed that “there seems to be a lack of faith in debate — the capacity to say, ‘Oh, interesting that you think that, because I think something different.’” It has to be possible to affect each other, Swinton posits, “and to just have a sense of trust that maybe you don’t know best, and maybe somebody else might be able to help you out with your understanding in something.”

She really doesn’t regret the Margaret Cho correspondence? She should. It was so very telling that Swinton reached out to, like, the first Asian-American woman she could think of and expected Cho to educate her. Only in the correspondence between Cho and Swinton, it became clear that Swinton just wanted to whitesplain why she was playing the part in Doctor Strange and she was hellbent on talking past Cho. “But the way in which people get listened to is by speaking up and getting hot. And sometimes, it needs to get messy.” She’s speaking about herself. She’s the one who thought she needed to speak up and get hot… about playing a whitewashed character.

Also, she sounds annoyingly privileged about streaming companies and television.