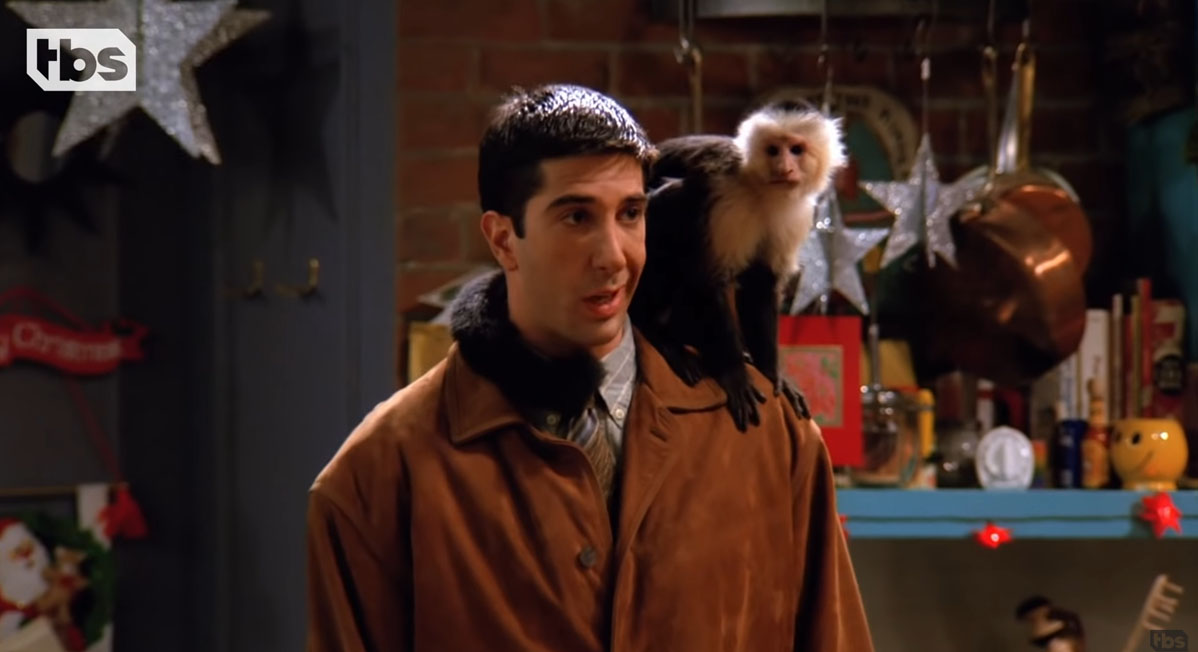 Bruce Willis and Cybill Shepard, Mariah Carey and Nicki Minaj, Charlize Theron and Tom Hardy, William Shatner and George Takei – Hollywood loves a good co-star feud. It’s time to add another one to that list: David Schwimmer and… Katie the monkey? According to Mike Morris, the trainer in charge of the two monkeys who played Marcel on Friends, the feud was real and all David’s fault. David has maintained since his Friends days that he was no fan of working with his capuchin monkey sidekick. I haven’t paid too much attention to his comments but generally thought they were of the, “that d@mn monkey” variety whenever someone brought them up. But I guess David has actually slung some accusations around about Katie and Monkey, the monkeys who were hired to play Marcel. He has accused them over the years of throwing poop, trying to bite him, and getting grubs in his hair. I’d heard the grub story, that in between takes, the monkey would be on his shoulder and they’d feed the monkey. The monkeys would eat over David’s head and the grubs would fall onto his scalp. Honestly I’d think I’d object to that too. But during the Friends reunion, Marcel was brought up and David, once again, got prodded for his feelings about Marcel. This time he elaborated further, saying the monkey didn’t hit its mark and messed up scenes. He accused Katie and Monkey of not doing their “job right”. And that, apparently, was the last straw for Mike. He spoke to The Sun, breaking his 30-year silence about David the Fink Schwimmer and his jealous rage against monkeys.

FRIENDS star David Schwimmer has been branded “despicable” by Marcel the Monkey’s trainer for saying he hated working with the animal.

Animal handler Mike Morris said Schwimmer – whose character Ross kept Marcel as a pet on season one of the hit sitcom – was “jealous” that the capuchin monkey got more laughs than him.

The Sun tracked down Mike and Katie the monkey, one of two simian actresses who played Marcel, to the San Fernando Valley.

Speaking about his bitter experiences on the set of Friends, Mike, 53, didn’t hold back as he let rip against David.

He said the star’s comments trampled on the memory of the other animal actress who played Marcel, known as Monkey, who passed away from cancer at the age of 36 in August last year.

Mike exclusively told The Sun: “I have never ever watched Friends because of Schwimmer’s comments about the monkeys.

“I have refused to ever since he did an interview after the animals got written out of the show and he said they tried to bite him and throw poop at him.

“They didn’t do any of that. None of it is true, when I was there none of that ever happened.

“I didn’t speak out back then but I am now.

“Of course, I didn’t watch the reunion interview but I heard from others what Schwimmer said.

“I just don’t agree with it, if anything he threw off their timing if we want to be truthful.

“Schwimmer was fine with the monkeys for the first couple of episodes and happy to be there.

“But people would laugh at the monkey and I think he got jealous because it wasn’t him getting the laughs.

“He seemed to get a little bitter about them being there after that.

“And of course the monkeys didn’t like working with him after he turned on them.

“It made it harder to do the work – a five-camera show is hard to work on with animals anyway so if you have an actor that’s not very helpful, it makes it even worse.

“He’s not the kind of actor who can improvise.

“Schwimmer wouldn’t prep with her, he didn’t want to rehearse with her.

“We had to rehearse with the monkey by herself and then he would come in and things wouldn’t be the same so it made it harder.

“It got to the point where he just really resented the monkey being there, he obviously had a problem with her and he’s still talking about it now.

“The other capuchin who played Marcel was called Monkey and passed away recently away from cancer so Schwimmer was talking ill of the dead when he made those comments.

“I find it despicable for him to still be speaking ill of her.”

And he responded to David’s prior claim that as trainers they wouldn’t let the actor bond with the animals.

He said: “It is true that we prefer that actors don’t become too friendly with the monkey.

“An actor is a prop to the monkey and has to work with that prop.

“We don’t want them to become friends because then they think ‘Oh it’s my friend, I don’t have to work’.

“If they see the actor as their friend they won’t do the job.

“They just want to go hang out with their friend instead of doing what they’re supposed to do.

Mike said both Matt LeBlanc and Jennifer Aniston worked with the monkeys and had no problem with them, something they have both said publicly as well. They frequently tease David about it too, it’s generally what sets him off in things like the reunion. Up until now, that was always the vibe I got from it, that the monkey was a button with David and the other Friends push it to rile him up. Even after the reunion, I just didn’t take it that seriously. Mike kept saying that David couldn’t improvise with a monkey. He’s a trained theater actor who has plenty of evidence of improvising, I don’t know why a monkey would change that. And I can’t get on board with the “jealous of a monkey getting laughs” argument.

However, Monkey just died and Mike’s still hurting from that. It would be hard to hear her reputation being besmirched, even if it was for laughs. I understand how personal this is for her trainer. If David’s saying the monkey didn’t do her job, then he’s saying Mike didn’t do his job well enough either. So if David is playing it up, he needs to think about who he’s hurting in the process. However, if he is honestly b*tching about working with a monkey for eight episodes, 30 years ago, for which he’s made millions of dollars since? Mike’s right, David needs to let it go.

This is Jennifer Aniston on David’s back, not his Friend’s co-star Katie or Monkey 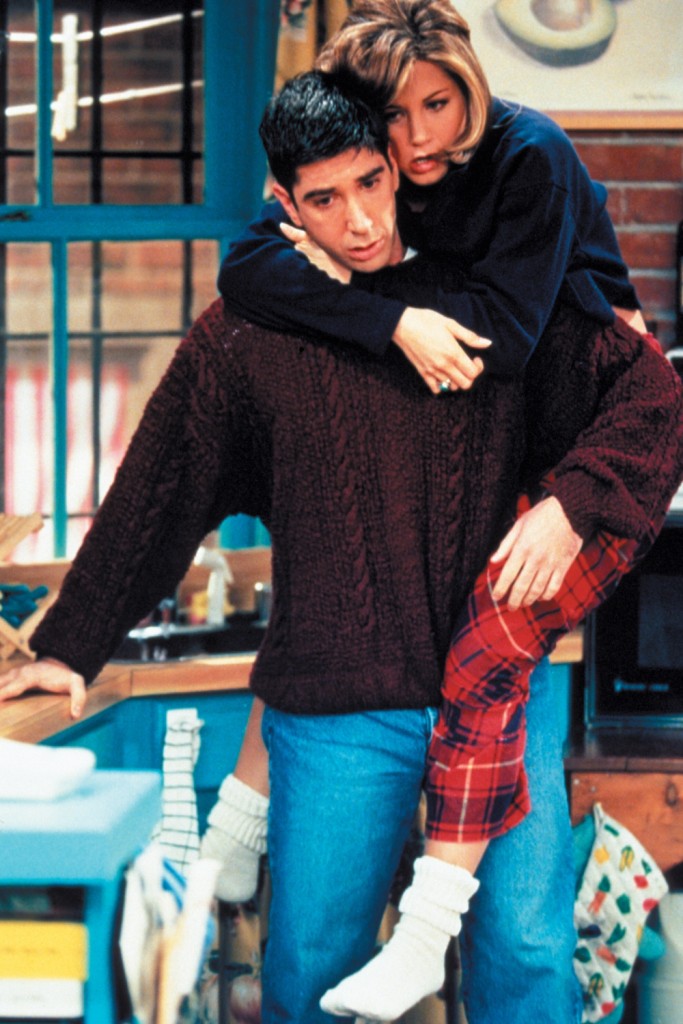 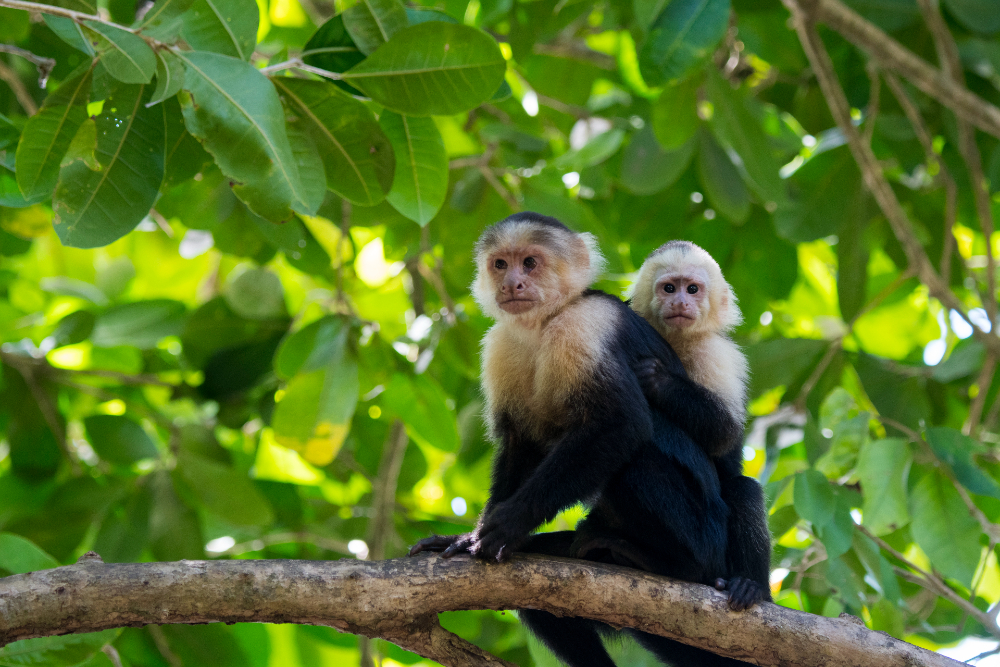