Leah Remini shades Laura Prepon for not speaking out against Scientology

Leah Remini hosts the People Puzzler game show, which is why she is doing the promotional rounds currently. She called in to Daily Blast Live to talk about the show but was asked first about fellow ex-Scientologist Laura Prepon. Laura admitted in August that she had not “practiced Scientology in five years.” At the time, Kaiser noted how well-chosen Laura’s words were about the cult and speculated it was likely to avoid consequences from CoS. On Tuesday, Leah confirmed that. Leah claimed Laura wasn’t using her voice to fight back against CoS and it was probably to avoid Fair Game, the practices carried out against CoS’ enemies. However, Leah went on to say she doesn’t respect Laura’s lack of action. She thinks ex members need to fight the cult because of the harm they did while members.

Leah Remini is explaining why she had issues with how Laura Prepon handled her exit from the Church of Scientology.

During a video interview with Daily Blast Live posted to YouTube on Tuesday, Sept. 28, Leah, 51, was asked about the That ’70s Show alum stating last month that she was no longer associated with Scientology. In her response, Leah said she thought the 41-year-old actress could have more effectively used her platform to help others. After all, Leah, who was a lifelong Scientology member before exiting in 2013, has become known for speaking out against the Church.

Leah told the outlet she “reached out” to Laura to express this, but added that “not everybody who has a voice uses it.” The King of Queens star went on to say she herself felt she had a responsibility to become an outspoken critic of the organization after having actively helped to recruit members for many years.

Leah, whose Emmy-winning series Leah Remini: Scientology and the Aftermath ran for three seasons, said “not everybody feels that they have a responsibility” to be so vocal about the alleged harm Leah feels the Church has caused.

“Some people, like Laura, feel they don’t have a responsibility to speak out,” she continued. “Do I respect it? I mean, not really.”

I am posting the clip below. It’s queued up to the CoS discussion. To me, the excerpt doesn’t read as adamant as Leah was about Laura’s silence. Once again, I admire Leah’s frankness. It’s refreshing to hear someone speak their truth in Hollywood. As for what she’s saying, I have no idea how CoS works. I got the impression that some members weren’t privileged to much information about what was going on. And when I read Laura talk about her departure, I assumed shejust didn’t know enough to hurt the church and that’s why they left her alone. But Leah would know, obviously. So her anger tells me Laura’s silence is something else.

However, if Laura is protecting something, or even still processing and deprogramming, then maybe she still needs time to join the fight. And she should be allowed that time. But I would think Leah would know this as well. I feel like there is a lot in what Leah isn’t saying. She wouldn’t have put Laura on blast if there wasn’t a reason for it. I’m not saying it was the right reason, but there was definitely a reason. I think it’s personal. 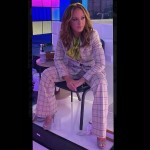