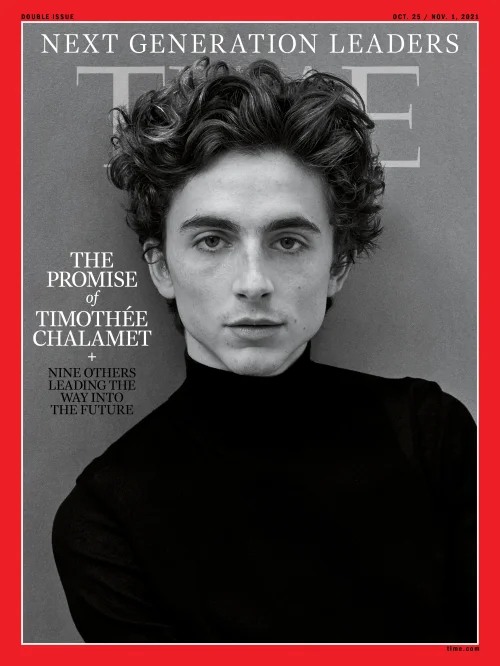 I genuinely enjoy it when Time Magazine or Newsweek actually puts an actor or artist on their cover and it’s not some kind of special issue or “most creative people under the age of 30” listicle. Sometimes it’s worth it for a weekly news magazine to just do a straight profile of a truly exceptional talent, which is what this is. Timothee Chalamet is an Oscar-nominated actor and arguably a generational talent, an old-school movie idol. He’s going to have a huge fall, with The French Dispatch and Dune coming out this month, and Don’t Look Up coming out later this year. He’s also filming Wonka, and he’s wrapped on Bones & All. He’s not yet 26 years old. This Time Magazine profile is wonderful – light and simple, but newsworthy. Some highlights:

The best advice he’s received: “One of my heroes—I can’t say who or he’d kick my ass—he put his arm around me the first night we met and gave me some advice. No hard drugs and no superhero movies.”

His late teens: He briefly attended Columbia, then NYU, but didn’t finish college, which he says seems “insane in retrospect.” He remembers the insecurity of those years, which he describes as “the soul-crushing anxiety of feeling like I had a lot to give without any platform.” But he waited for the kinds of jobs he wanted, trying to avoid getting locked into a commitment that might stifle his growth, like a years-long TV contract. “Not that those opportunities were coming at me plenty, because they weren’t. But I had a marathon mentality, which is hard when everything is instant gratification.”

On his Call Me by Your Name costar Armie Hammer: “I totally get why you’re asking that, but it’s a question worthy of a larger conversation, and I don’t want to give you a partial response.”

On the delay in Dune’s release: “It’s so above my pay grade. Maybe I’m naive, but I trust the powers that be. I’m just grateful it’s coming out at all.”

What he stands for: “I feel like I’m here to show that to wear your heart on your sleeve is O.K.”

He’s not going to obsess about how he’s perceived: “To keep the ball rolling creatively takes a certain ignorance to the way you’re consumed,” he says. He calls it a “mirror vacuum”: the black hole you disappear into studying your own reflection.

On movie stardom: “I don’t want to say some vapid, self-effacing thing. It’s a combination of luck and getting good advice early in my career not to pigeonhole myself.” The term movie star, to him, is “like death.” All it does is make him think about ’90s-nostalgia Instagram feeds. “You’re just an actor,” Chalamet says, like a mantra. “You’re just an actor!”

It’s pretty clear that despite his protestations to the contrary, he is aware of how he’s perceived, and he is aware of the intense internet feelings about him, and the intense real-life feelings too. It seems like he’s trying to wear it lightly, correcting the record when he can, and just trying to shrug off the smaller stuff. Which is the way to handle it, and the way to take the long view. I’m dying to know who told him “no hard drugs and no superhero movies” though. It felt like the kind of advice Josh Brolin (his Dune costar) would have given him. Maybe a grizzled George Clooney said it? Those are my guesses. I doubt Jason Momoa or Robert Pattinson feel that way.

94 Responses to “Timothee Chalamet received this advice: ‘No hard drugs & no superhero movies’”