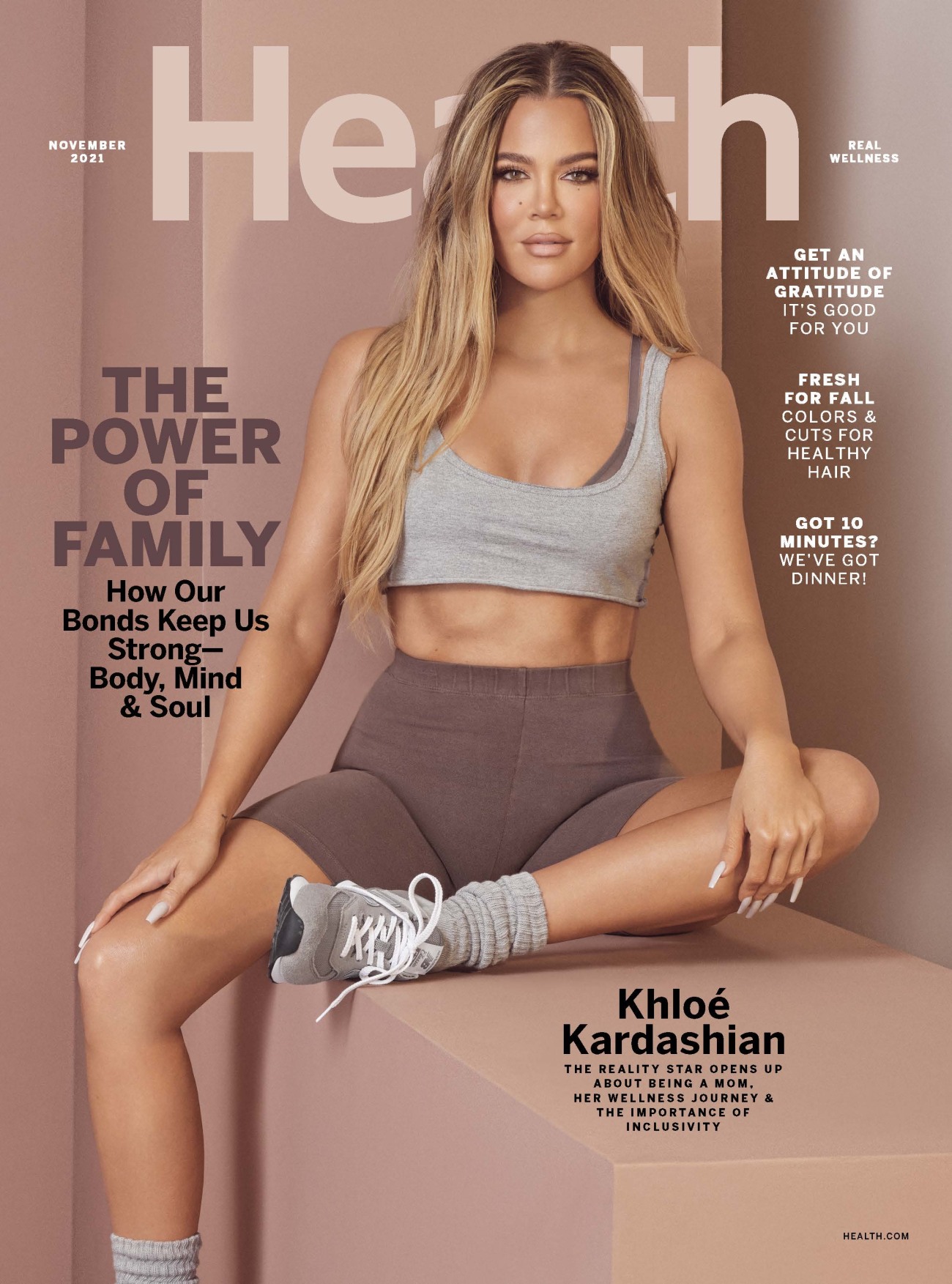 Khloe Kardashian covers the latest issue of Health Magazine. I’m of two minds about this – on one hand, Khloe is all about fitness and transforming her body and she probably lives a pretty “healthy” life. On the other hand, I don’t think she’s all that healthy in general, whether we’re talking about her plastic surgery or her terrible love life. But whatever, judge for yourself. Khloe is unrecognizable on the cover and in the photos, which just adds to the whole “smoke and mirrors” thing she’s got going on with her face and body. You can read her interview here. Some highlights:

Why she’s proud of Good American (her denim company): “We started having a conversation about clothes and how I felt excluded my whole life. I’ve fluctuated. At my largest, I was a 14 or 16—which, by the way, is totally standard in the U.S. I always felt excluded from my own family—not by them. On shopping trips, I couldn’t shop where they shopped. I’d be indirectly told by brands that their clothes weren’t for me because they didn’t produce a dress in my size. We built Good American always keeping representation and inclusivity at its core. It wasn’t a fad that we were trying to follow… We want full representation from every angle.

What she teaches True about the importance of family: “True is now 3. My family is glued to one another regardless, but with COVID and the lockdown, her cousins were her only friends for a bit. There were no play classes or anything like that. Even though she’s young, she definitely knows about family. As kids, family was always at the core of every conversation. No matter what, you support one another. You’re allowed to argue and disagree. I could never imagine not speaking to one of my sisters. It just doesn’t happen. My sisters have gotten into some brutal, literally punching fights. But you get over it—there’s no other option. And we’re raising the cousins to almost feel like they’re siblings. I don’t care if they disagree— that’s inevitable. And, of course, I want them to talk through their feelings and feel validated. But there’s just no option for us to be separated and not talk to one another.

Parenthood has helped Khloe bond with her sisters: “Kourtney was the first one to be a parent. It would be like, “Why are you late?” But now, it’s like, “OK, I get it.” There are things that you can’t understand until you are a parent. My relationship with my mom is so much better, too. I have so much more empathy and compassion—it’s like, wait, you had six kids?!

Taking care of her emotional health: “I turned to the gym when I was going through a divorce. At first your body is, like, dying. But emotionally and mentally, the release that I got was worth it. I quickly realized how good I feel when I’m consistent with it. I also like to read books, and I love family time. I’m a hermit crab—my zodiac sign is a Cancer, and I’m very much a homebody. I need my alone time. After my daughter goes to bed, I don’t want to be around people. I want to lie in bed and watch TV—that’s my recharge moment.

Emotional eater: “I’ve actually always had a really unhealthy relationship with food. When I was younger and was sad, I would eat—I was an emotional eater. And then I hated the way I felt after that. I was almost punishing myself for binging or having a bag of chips—it just became so much thought. I had tried every diet under the sun. Remember when Beyoncé did that lemon juice and cayenne pepper thing? I was like, sign me up! That’s why I yo-yoed my entire life—I was always chasing some fad. When I started working out, I decided to make some lifestyle changes. So I’d say, for example, this week I am just going to do one thing—I’m just going to cut out sugar. Then, maybe I’d try to do it for a month. After that, I’d try to incorporate another healthy change.

Before she purchased her Pinocchio Butt and changed her face to a ridiculous degree, I actually found Khloe to be the most relatable (to me). The weight fluctuations, the realness about emotional eating and dieting and feeling otherized. She’s always had a harder road with body image, especially being in the public eye to this degree. So… I do sort of relate to her even now, even if I would never go to these lengths to alter my appearance.

40 Responses to “Khloe Kardashian: ‘I’m a hermit crab—my zodiac sign is a Cancer’”