Iman on David Bowie: ‘He’s not my late husband. He’s my husband’ 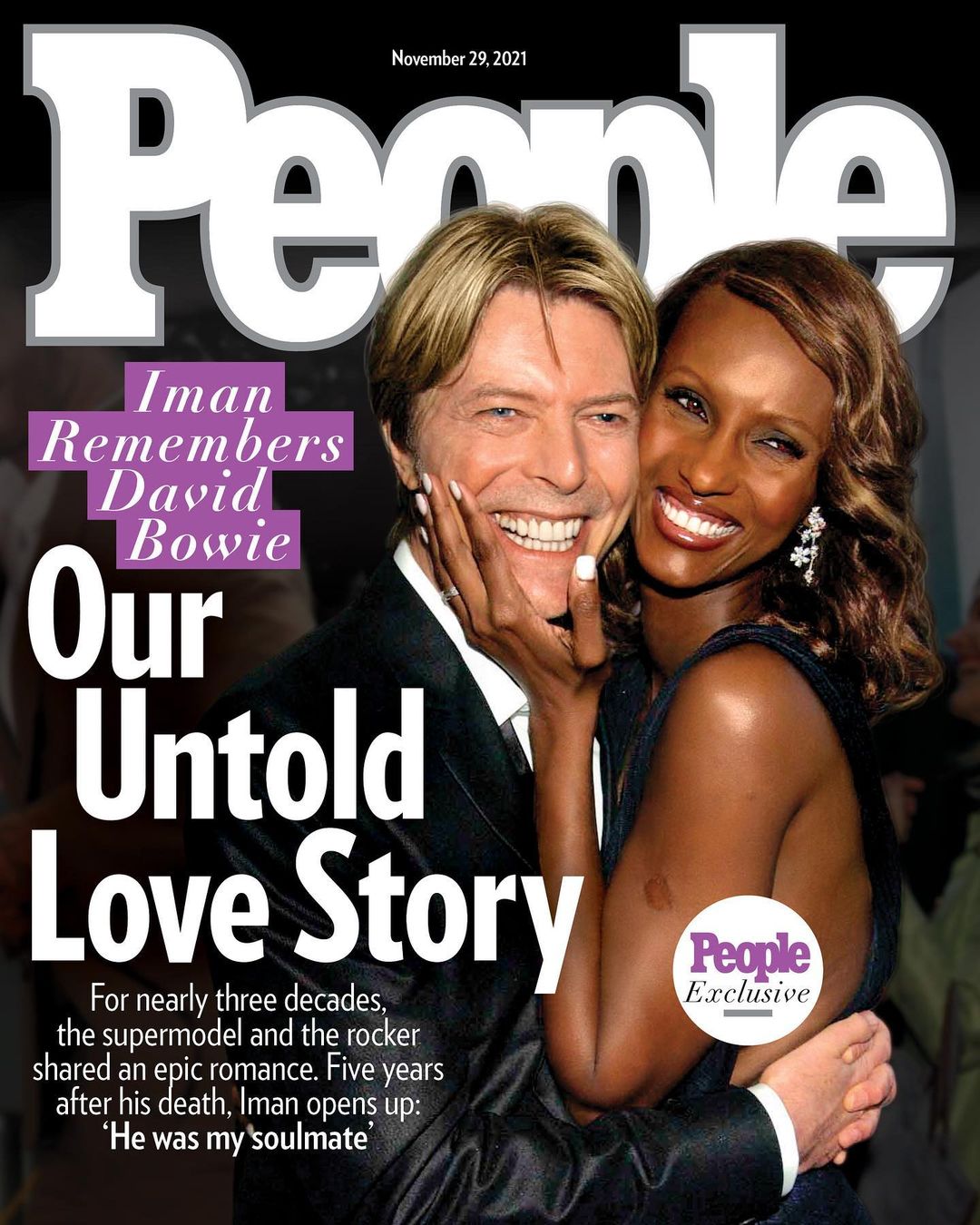 2016 was a rough year. We lost many of my favorite celebrities like Prince, Carrie Fisher, Alan Rickman and Gene Wilder. But one of my biggest heartbreaks was the loss of David Bowie. David and Prince fueled my preadolescent fantasies. When David married Iman in 1992, he gained my eternal respect. It has been five years since David passed. Iman is launching her first fragrance exclusively for HSN called Love Memoir in honor of her husband. The fragrance is said to be a mix of David’s favorite fragrance, Grey Vertiver by Tom Ford, and bergamot for Tuscany where there were married. In cover interview with People, Iman talked about her beautiful romance of 26 years. Iman said she met David on a blind date (I am looking at you Meghan) and he told her later that it was love at first sight. Here are a few highlights and a clip is below:

“David said it was love at first sight,” Iman, 66, tells PEOPLE. “It took me a few months but I got there.”

After their first date, she recalls how she flew to Paris to walk the runway for her friend, Thierry Mugler. When she arrived at her hotel room, it was filled with flowers. Gardenias. And when she returned to L.A., he was there to meet her at the airport. “And that’s how it started,” she says. “He properly wooed me.”

Yes, she was drawn to the musician for his kindness. “Early on, we were walking down the street and my shoelace came undone and he got on his knees to tie it for me and I thought he’s the one.”

But there was also their off the charts chemistry. “David was beyond handsome,” she says. “He oozed charisma.”

The two complemented each other in unexpected ways. “If David was not in my life, I don’t know if I would have had the courage to start Iman Cosmetics [in 1994]” she says. “I asked him ‘What if it fails?’ and he said, ‘If you don’t try, you’ll never know if it succeeds.’ He was very proud that it was one of the first lines to be very inclusive. Very chuffed, as he would say. Pleasantly happy.”

“Sometimes I have to remind myself that I had 26 years. So I have that to sustain me.”

And she has no thoughts of ever marrying again. When her daughter, Alexandria “Lexi” Jones, now 21, asked her about it, Iman recalls, “I said ‘No, I will not.’ I still feel married. Someone a few years ago referred to David as my late husband and I said ‘No, he’s not my late husband. He’s my husband.'”

“I definitely feel his presence, especially when I look out over the glorious sunsets at our home because David loves sunsets,” she says. “So in that way he is ever present.”

My goddess this story just makes me tear up a bit. I used to love seeing photos of David and Iman together. David always looked like he felt like the luckiest man on the planet when he was standing by Iman. Iman just glowed like she was planet orbiting his very bright star. I understand why Iman says she probably won’t remarry. Iman was very fulfilled in her relationship and marriage with Bowie. I love the story about how Iman knew she would marry him because he got on his knees to tie her shoe laces. To be fair, I would have fallen in love with Bowie at that moment too. I also love how David encouraged Iman to start Iman Cosmetics. He just seemed like a very loving and supportive husband and I am so happy Iman was able to experience that sort of love.

I am looking forward to this new fragrance that Iman has created. I personally love everything Tom Ford and the notes of Love Memoir sound amazing. I also love the story behind the scent. I hope over time Iman will not get sad whenever she thinks about David. To be fair, I don’t think that’s something spouses ever get over. 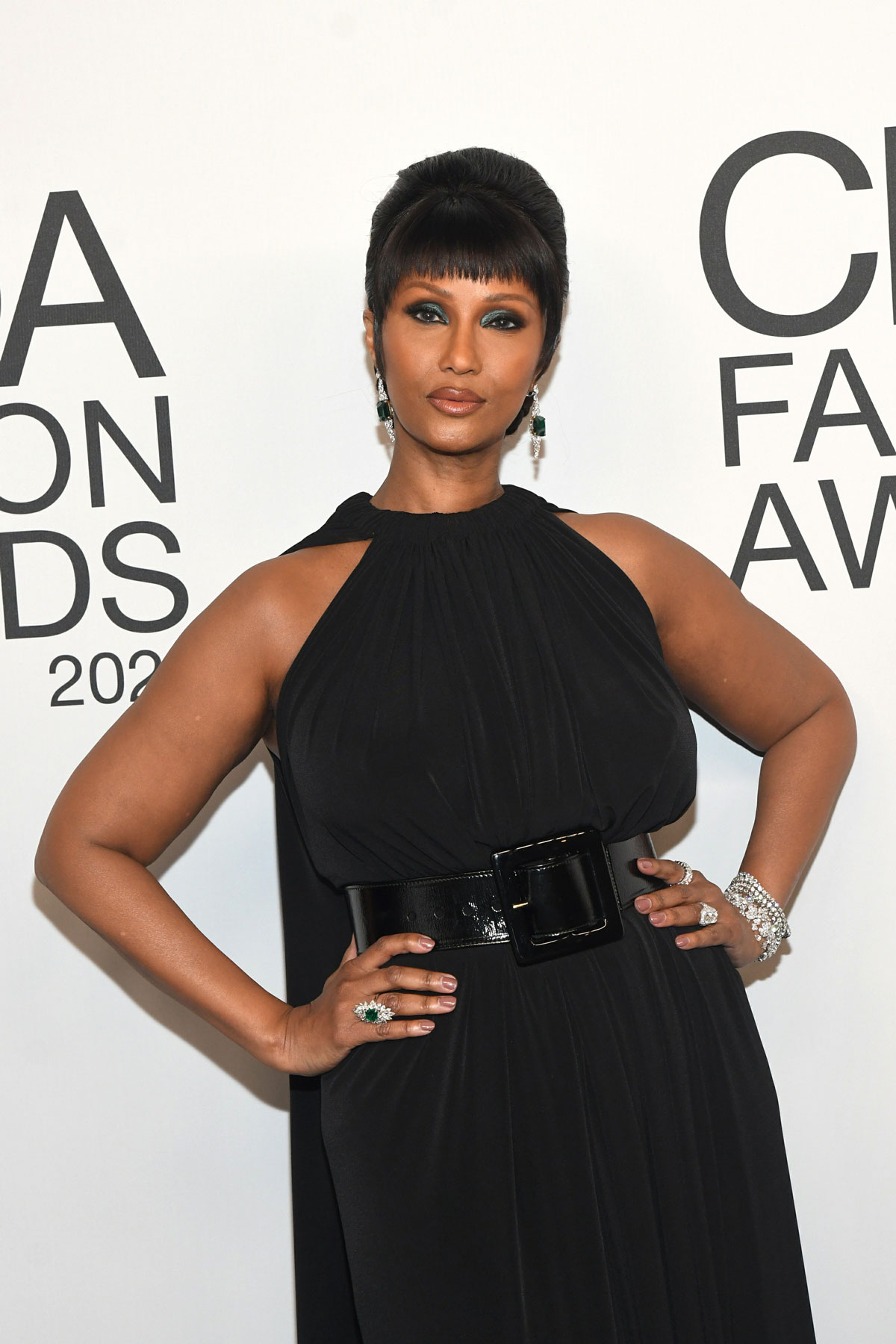 34 Responses to “Iman on David Bowie: ‘He’s not my late husband. He’s my husband’”