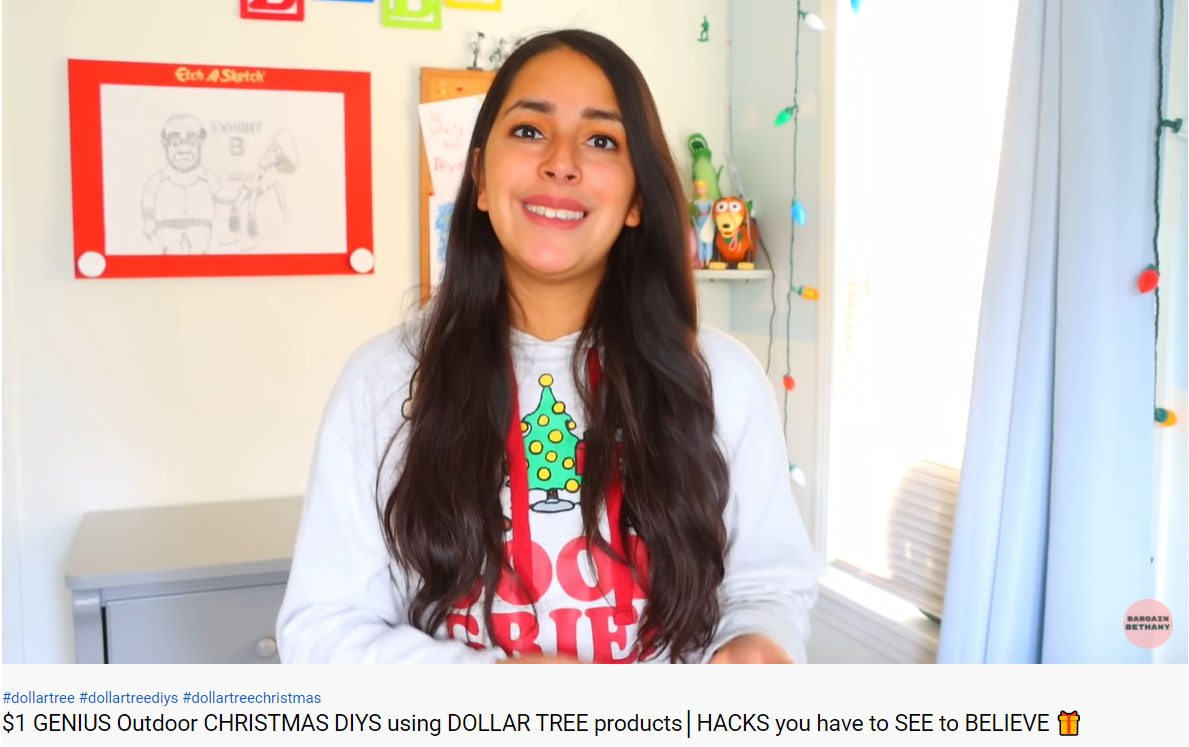 This is Bethany of Bargain Bethany, she makes Dollar Tree DIYs. This screenshot is from this video

In September, US discount retailer Dollar Tree announced that they would raise prices on some items by over a dollar. Where I live, Dollar Tree is only retailer where all products are priced at a dollar and under. Incidentally when I first moved to the south I was confused by the fact that there are other stores called Family Dollar and Dollar General, which have products at different price points. Dollar Tree is just for items at one dollar and under. You can get great deals there on pantry items,cleaning products and toiletries. I regularly shop there for things like toothbrushes, candles, candy and cards. Their cards are nice and you can’t tell that they only cost a dollar! Whenever I go to CVS and make impulse buys I end up regretting it because I could have purchased it at Dollar Tree for so much cheaper. (Also if you need a drain snake get it at Dollar Tree because it costs $4-$5 at other places. They also have things like Command Hooks, mops, sponges and shower organizers for $1. I could go on, and some items are not cheaper because they come in smaller packages, but that’s another story.)

Dollar Tree has some more expensive items at their Dollar Tree Plus stores with specialty $3 to $5 products along with their regular $1 stock. They’re now increasing prices across all stores to $1.25. In their announcement they stated that it’s not a response to inflation and that it will go into effect by the end of the first fiscal quarter.

Dollar Tree.. one of America’s last remaining true dollar stores — said Tuesday it will raise prices from $1 to $1.25 on the majority of its products by the first quarter of 2022. The change is a sign of the pressures low-cost retailers face holding down prices during a period of rising inflation.

Dollar Tree (DLTR) said in a quarterly earnings release Tuesday that its decision to raise prices to $1.25 permanently, however, was “not a reaction to short-term or transitory market conditions.”

Selling stuff strictly for $1 hampered Dollar Tree, the company said, and forced it stop selling some “customer favorites.” Raising prices will give Dollar Tree more flexibility to reintroduce those items, expand its selection and bring new products and sizes to its stores.

“This is the appropriate time to shift away from the constraints of the $1 price point,” CEO Michael Witynski said in a statement.

This won’t affect my shopping there, but many low income people rely on Dollar Tree and will feel the pinch from a 25% price increase. Maybe they’ll offset that by introducing larger and new products as they mentioned. Inflation is hitting people hard, especially with food and fuel costs. Dollar Tree is a corporation, not a franchise. Hopefully they will also raise wages for their workers as their statement mentioned. Their CEO makes over $10 million dollars a year and they also have five other top executives who make about $4 million and up a year. They could spread that wealth among the people who do the hard work and put their lives at risk during the pandemic.

I asked the cashier at my local Dollar Tree, which has never had anything over a dollar, if she knew more about this. She said that they were told there would be a price increase but that they didn’t know when it would happen. There were no signs about it, although they’ll probably put some up when it gets closer to the price change.

Also I watch a lot of Dollar Tree shopping and DIY videos. I’m not particularly crafty but I find them soothing and I like seeing what people come up with. My favorites are Bargain Bethany, She So CraftDee, Glue Guns and Roses, Do It on a Dime, and ChicOnTheCheap. Sometimes I just like to watch women shopping because I also find that relaxing. PrettyNflawed is so great for that.

This is a screenshot from a video from PrettyNflawed where she showed the stuff she got at Dollar Tree. She loves these plates for Thanksgiving because she doesn’t like having her food touch. It was cute! Also she got broom holders from Dollar Tree. I got a similar set from Amazon for over $10. 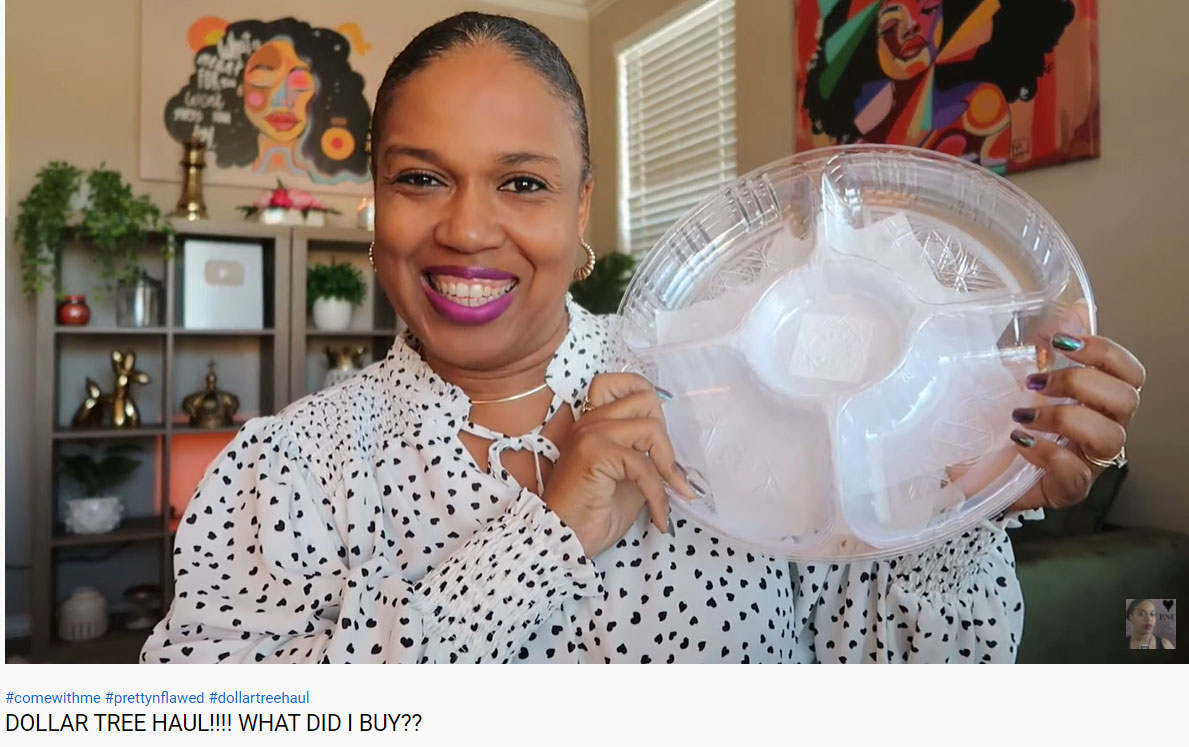 Catherine from Do It on a Dime. This screenshot is from this video. 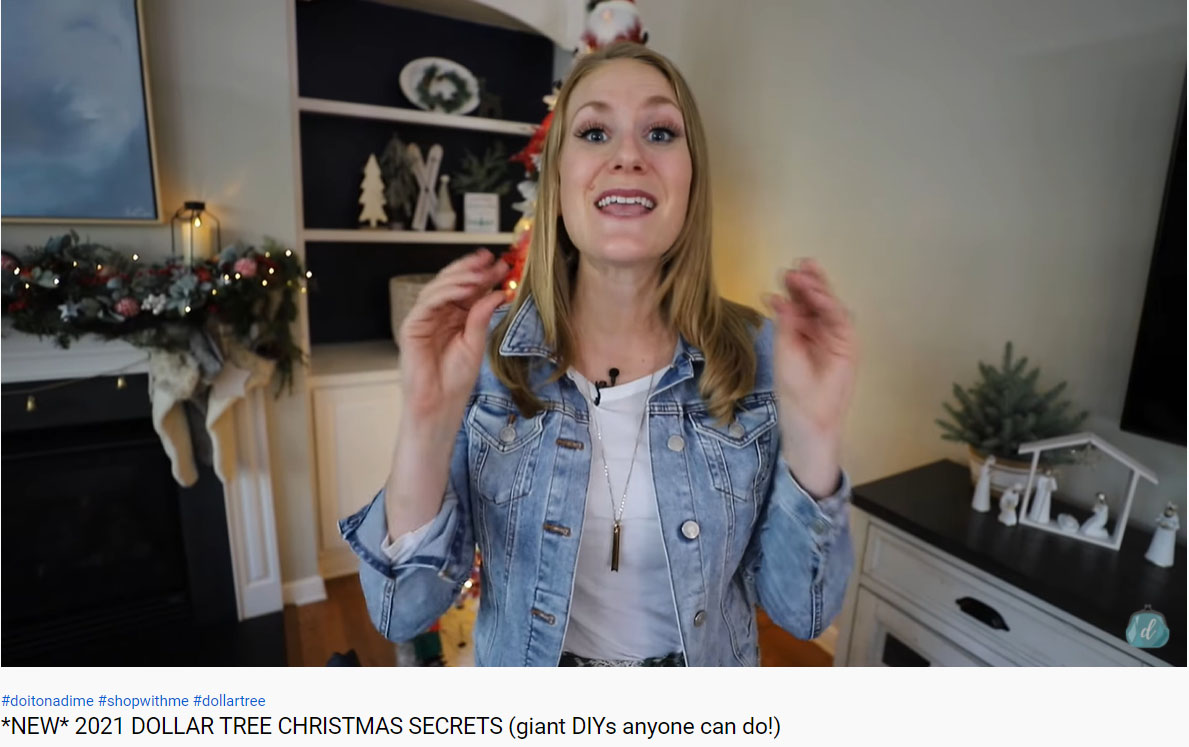