Jennifer Aniston: The industry ‘is not that glamorous anymore,’ it’s about TikTokers 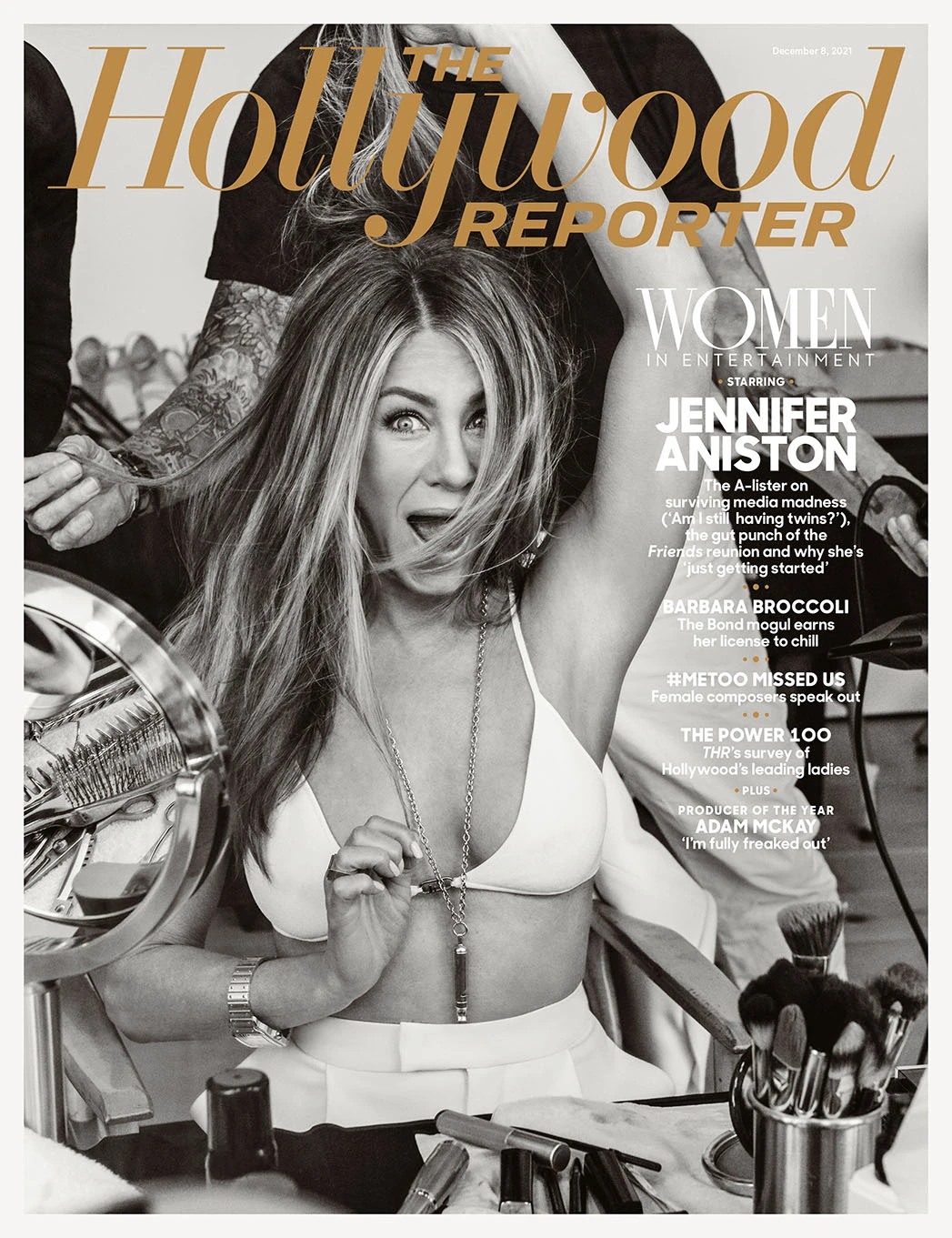 Jennifer Aniston covers the latest issue of the Hollywood Reporter, because she was named the recipient of THR’s Sherry Lansing Leadership Award, for her career and her philanthropic work. The interview is pretty intensive, especially considering Aniston hasn’t been doing these longer interviews in recent years. She talks about The Morning Show, the sequel to Murder Mystery (with Adam Sandler) and the Friends reunion. There are casual mentions of Justin Theroux and the thing which disrupted her life almost seventeen years exactly: her divorce from Brad Pitt. His name isn’t mentioned, but it’s definitely odd how Pitt and their divorce hangs over the interview like a specter. Truly, it will be 17 years in January since they announced their divorce. You can read the full THR piece here. Some highlights:

Filming the ‘Friends’ reunion brought up weird & sad memories: “You get there and it’s like, “Oh right, I hadn’t thought about what was going on the last time I was actually here.” And it just took me by surprise because it was like, “Hi, past, remember me? Remember how that sucked? You thought everything was in front of you and life was going to be just gorgeous and then you went through maybe the hardest time in your life?”

What she thought her life would be post-Friends: “It was more personal stuff that I had expectations about that sort of shape-shifted, so to speak. That was what was jarring, that we all had an idea of what the future was going to be and we were going to go hunker down and focus on this or that and then it all just changed overnight, and that was it. But again, everything’s a blessing if you’re able to look at life’s ups and downs in that way. And if it all hadn’t happened, I would not be sitting here the woman that I am.

Whether we should reassess Aniston’s tabloid years: “I don’t know, because I think people are still doing it today. What the tabloids and the media did to people’s personal lives back then, regular people are doing now. Although I haven’t seen a tabloid in so long. Am I still having twins? Am I going to be the miracle mother at 52? (Laughs.) Now you’ve got social media. It’s almost like the media handed over the sword to any Joe Schmo sitting behind a computer screen to be a troll or whatever they call them and bully people in comment sections. So it’s just sort of changed hands in a way. And I don’t know why there’s such a cruel streak in society. I often wonder what they get off on.

How Hollywood saw her: “I was the girl next door, the damsel in distress, the brokenhearted — your traditional rom-com themes. And at a certain point, it was like, “Can’t we do something else? Am I just on this part of the cereal aisle? Like, will I ever get to be a bountiful Kashi or some sort of oatmeal, or am I going to be Fruit Loops forever?” And then you start to doubt yourself. “Maybe I can’t? Maybe there’s a reason that no one [is giving me these opportunities]?” Now, so much is self-generated, which is great since I wasn’t going to get the jobs I’m really interested in because the industry isn’t secure enough to say, “Yeah, let’s try it.” They go for the actors they know can play the fancy dramatic roles. But there are still certain directors I’d love to work with, ones who have their pick of who they like, and sometimes I want to go, “I’d love to be part of that club.”

What the industry is like now: “I don’t know because I don’t know what the industry is anymore. It’s not the same industry that it used to be. It’s not that glamorous anymore. It’s slowly becoming about TikTok and Instagram followers. It’s like, we’re hiring now based on followers, not talent? Oh, dear. And I’m losing touch. I’m not great at going, “I’m going to stay relevant and join TikTok.”

Liberal vax-hole: “That’s the other thing about the pandemic: I’m prone to agoraphobia, and so I used to be like, “Let’s go to dinner,” and now I’m like, “No, let’s not. Come over, come over, come over.” I think I’ve been to five restaurants [since the pandemic began], and the same ones because they required vaccinations. You know, someone literally called me a “liberal Vax-hole” the other day. I don’t understand the disconnect right now, being bullied for wanting people not to be sick? I mean, that’s what we’re talking about.

Whether the attention on her personal life affected her professional life: “I used to take it all very personally — the pregnancy rumors and the whole “Oh, she chose career over kids” assumption. It’s like, “You have no clue what’s going with me personally, medically, why I can’t … can I have kids?” They don’t know anything, and it was really hurtful and just nasty….It’s the same with Dolly Parton; Dolly Parton never had kids. But are people giving her sh-t for it? No, no one’s tried to put her in a white picket fence.

The double-standard: “Which is such a double standard: Men can be married as many times as they want to, they can marry [younger] women in their 20s or 30s. Women aren’t allowed to do that. Men in their 30s, by the way, are way different from men in their 40s and 50s. And late 20s even — it’s a whole new world that I’m finding is alive and kicking and they’re not … what was my point?

There’s nothing wrong with what she says and I largely agree with it, but I’ll say this, as someone who has covered Aniston for years: she really coasts on people not remembering (or not wanting to remember) her own words and actions. She acts like all of this – the “girl next door” stereotyping, the interest in her love life, her status as the Wronged Woman, even the questions about motherhood – was just dropped in her lap out of nowhere, like she didn’t actively participate in it and cultivate it for years. Was she treated badly, was she stereotyped and limited by her tabloid persona? Yes. She was. Did she also actively build that tabloid persona into her celebrity/actress brand? Yes. Absolutely.

80 Responses to “Jennifer Aniston: The industry ‘is not that glamorous anymore,’ it’s about TikTokers”