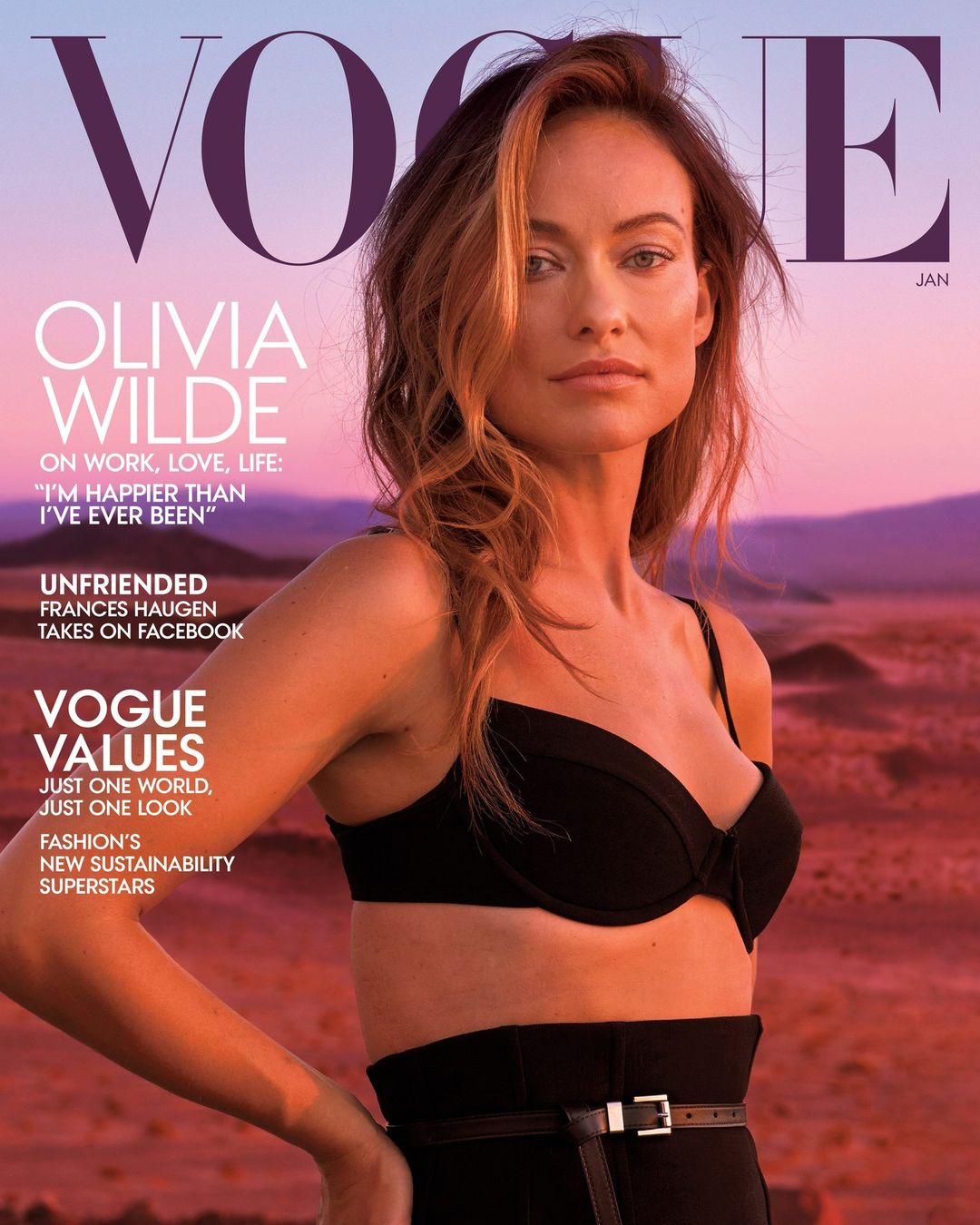 Olivia Wilde covers the latest issue of Vogue, mostly to promote Don’t Worry Darling. I think DWD was originally supposed to come out in early 2022, which would explain the timing of this cover, but the release date was pushed back to September 2022. Much of the Vogue profile is about the film and Olivia-as-director and her journey as an artist and as a woman in full. There are mentions of Harry Styles and she’s not hiding their relationship, but she doesn’t gush and she’s not performatively squirrelly about it either. She genuinely seems to be in a good place in her life and career. And while I’m usually not a fan, I like a lot of what she said here. Some highlights:

Living in LA now: As an East Coast native, she hasn’t totally managed to shake her instinctive skepticism of Los Angeles. “But then this….” She gestures outdoors, letting the pool and the glorious sunshine speak for themselves. “And for kids, it is so much easier. They come home from school and just run out and expend all their energy.”

How the kids handled the pandemic: “It’s wonderful to have them become nomadic in the same way I’ve always been—to feel that whatever country we’re in, they have a routine and a community. They’re best friends, and they have each other.”

The inspiration for Don’t Worry Darling: The idea for the film crystallized shortly after Trump’s election, when Wilde met Gloria Steinem at “this little gathering in New York City.” Wilde was despondent; she asked Steinem what she could do. Stop paying taxes, Steinem told her. Wilde was aghast. “I said, ‘What?’ I own property. I have kids. I don’t think I can do that.” Then it hit her: “This is why nothing will change. That was the beginning of Don’t Worry Darling. I was like, Who’s that person who’s actually willing to destroy the structure that is built entirely for their comfort? That’s a selflessness on a level that I admire but admit is far from the way I live my life.”

Her respect for Harry Styles taking a supporting role: “I cannot tell you how many men read the script and said, ‘Unless it’s a two-hander, unless I’m in as much—or more—of the script than she is, it’s not worth it.’ And it’s not their fault. They’ve been raised with this kind of innate misogyny as a part of their society: ‘If I don’t take up enough space, I won’t seem valuable.’ Actresses—highly trained, highly valuable actresses—have appeared in supporting roles in countless films. We don’t think about it in terms of, ‘My role is not as big as his.’ It’s, ‘Oh, it’s a good role. It’s a role where I have a brain.’ ”

On her relationship with Styles, who is 10 years younger: “It’s obviously really tempting to correct a false narrative. But I think what you realize is that when you’re really happy, it doesn’t matter what strangers think about you. All that matters to you is what’s real, and what you love, and who you love. In the past 10 years, as a society, we have placed so much more value on the opinion of strangers rather than the people closest to us… I’m happier than I’ve ever been. And I’m healthier than I’ve ever been, and it’s just wonderful to feel that.”

Going on vacation with Styles & leaving her kids with Jason: “Parenting forces you to be honest about how you live your life. It puts in sharp, clear focus decisions you’re making. I think we owe it to children to be happy. They sense it. They’re so intuitive. The idea that you can trick your kids into thinking you’re happy is ludicrous.”

How women are controlled: “You can go deep on Cold War influences on family structure, why we all think we need, you know, a two-parent household and a microwave. It’s very easy to control women by using guilt and shame, and I have no time for misplaced guilt and shame. The work I’ve done personally in the last decade has been learning to have a voice, and taking my voice seriously.”

She’s broken free: “[I’m free from] this idealized version of a woman. And I felt really thrilled to get older. It’s great when you get too old to play dumb. As you get older as a woman, you put up with less bullsh-t. I’m only willing to surround myself with people who are positive, and root for others. I choose kindness. I choose joy.”

I love what she said about what parents owe their kids and how society controls women. Those are two great comments/ideas. Kids know when their parents are miserable, and kids “need a break” from their parents sometimes as much as parents need a break from their kids. Olivia’s kids were fine, they were their dad, and Olivia enjoyed a lovely kid-free vacation, end of story. And she’s absolutely right about how society imposes shame and guilt on women as a form of control. The Gloria Steinem thing was fascinating too!