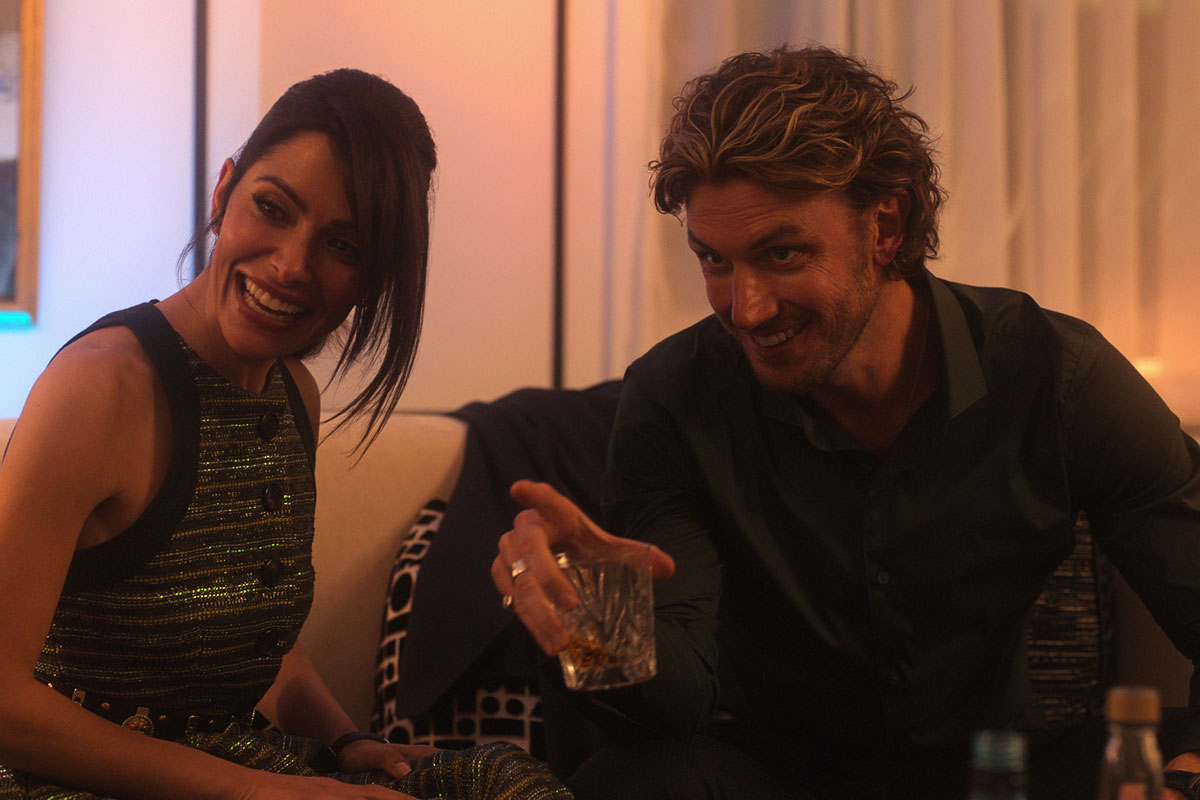 Somewhere between ten to 22 percent of couples meet through work. I am sure this figure increases for those who work in industries where they have to be quite intimate with their co-workers. Such is the case for Netflix’s train wreck of a show that I couldn’t stop watching, Sex/Life. Sex/Life, one of the most-watched series on Netflix last year, helped bring two of its two stars together in real life. Star Sarah Shahi was going through a divorce when filming started. Sarah did not expect to fall in love with co-star Adam Demos but real life imitated art. It has been over a year since they went social media official and they are still going strong. A quick check on their socials shows a lot of sickly sweet love notes to each other. Sarah even calls Adam her soul mate. Below are a few more highlights from Us Weekly:

The duo filmed the series together in the fall of 2020 in Canada, playing sexy former lovers who get caught in a love triangle. In the show, Shahi’s character, Billie, is married to Cooper (Mike Vogel) but yearns for her wilder days when she hooked up with Demos’ Brad.

Offscreen, the L Word alum was going through a divorce when the risqué role came into her life — and not necessarily thinking about finding love again.

Us Weekly exclusively confirmed in June 2020 that Shahi and Steve Howey had separated two months prior after 11 years of marriage. The former spouses, who share three children, son William and twins Violet and Knox, finalized their divorce in January 2021.

Shahi wrapped Sex/Life one month prior to her divorce being finalized. At the time, she reflected on how much her life had changed over the past few months.

“And it’s a wrap on Billie Mann. @sexlife. My alter ego,” she captioned a series of photos of her on-camera persona in December 2020. “The layered, wildly complex, hurricane of a character I had the honor of portraying. The saint and the sinner wrapped up in a messy pink bow.”

The Texas native then got a little more personal, adding, “This show was more than just another gig. It changed the direction of my life. It unleashed parts of my heart I had hidden for so long. It helped me find my truth. I was broken open. Finally.”

When celebrating her birthday in January 2021, the Person of Interest alum again reflected on her good fortune, noting that her relationship with Demos is one of the many “privileges” she’s been afforded as she’s grown older.

“It’s a privilege to wake up every day with excitement as to what the day COULD bring, to look at Christmas lights and Halloween decorations with more astonishment than my kids,” she wrote via Instagram at the time. “To get giddy at the smell of pages of a freshly opened book. To have found my love @adam_demos, to laugh until the sun comes up (sleep is boring), to dance when there’s no music.”

I know people make a big deal of Hollywood relationships in which the couples meet on set. However, those sort of dynamics are not abnormal within the society at large. I was super excited about Adam and Sarah getting together and I am glad they are still going strong. To be fair, I didn’t expect anything less. Sarah and Adam’s chemistry on Sex/Life was the only thing that kept me coming back because the series was an absolute train wreck of crazy. Adam stated that the steamy sex scenes were mechanical, yet they managed to show their attraction despite the material. You could tell that Sarah and Adam’s portrayal was more than just acting. Now I am wondering who made the first move and how they decided to date (I’m nosy).

I think Sarah and Adam are a cute couple. Although their comments to each other are over the top for me, I still love and celebrate their relationship. Adam seems like a good guy and a good time which seems like something Sarah needed in her life. Going through their relationship moments of last year has me cheering for their success as a couple. I am also looking forward to their onscreen chemistry in season two of Sex/Life. Of course I will watch the show because Adam is pretty and I enjoy having him on my screen. Good luck to Adam and Sarah on their relationship. I would love to see them go the distance.