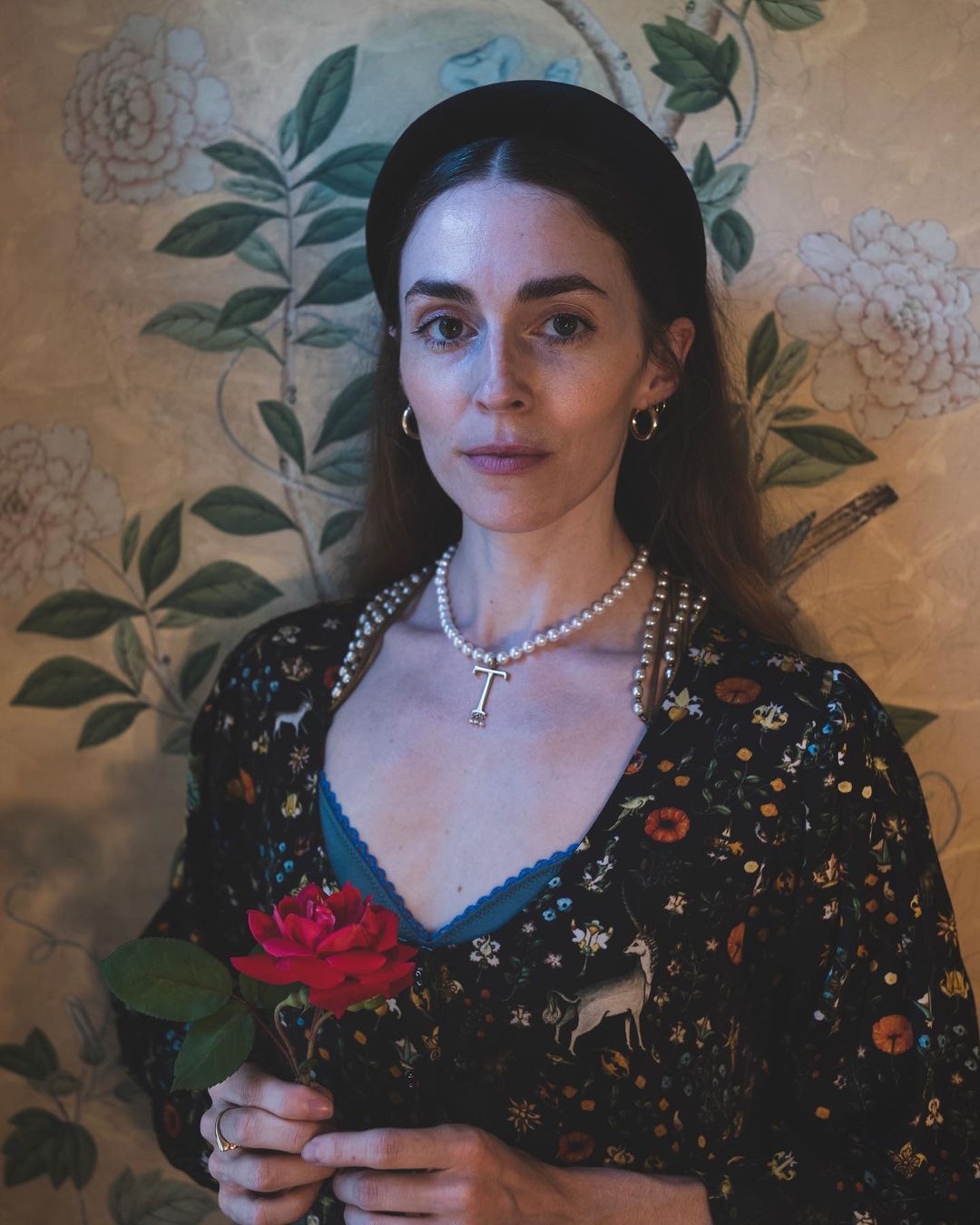 Anna Marie Tendler is John Mulaney’s now-ex-wife. Their divorce was finalized a few weeks ago, and she issued no public statement to commemorate it. She’s actually only issued one direct statement during the whole debacle around the end of her marriage: a statement about being “heartbroken” last May, when Mulaney leaked that he was filing for divorce. Anna Marie has her own voice, of course. She’s not just going to sit around and be the scorned ex-wife. To her credit, she’s worked through her heartbreak by creating art. She sews and designs things, she completed her masters in costume studies last year, and she’s an accomplished photographer and multimedia artist in her own right. She’s profiled in the latest issue of Harper’s Bazaar and basically… she’s okay, all things considered.

She lives in a haunted dollhouse in the woods and makes art: She has spent the past year decorating a sprawling 19th-century stone house in the Connecticut woodlands about an hour and a half outside New York City, turning it into the backdrop for her recent series of haunting photographs, “Rooms in the First House.” These stylized, intricately composed self-portraits and interiors, some of which Tendler first debuted on Instagram, were recently exhibited at a Brooklyn art fair where they sold out quickly, some fetching prices in the mid six figures. As we walk through long, high-ceilinged galleries decorated with antique furniture, ornate light fixtures, and lush William Morris wallpapers, Tendler jokes about how as a child she longed to live in a haunted dollhouse. In her photographs, the haunted doll is Tendler.

She still has a fan’s painting of Petunia: “This is just a painting of Petunia that someone who was a fan of John’s painted and then gave to him at a show.” We pause in front of the unframed oil portrait. It’s a great likeness of the dog, who has 151,000 Instagram followers. Petunia is following close at our heels as we tour the house, wheezing adorably as French bulldogs do. “He doesn’t want it?” I ask. “I don’t think so.”

She enjoys living in the woods now: “I do miss my friends, and I am aware that I’m maybe a little too young to be living in the middle of the woods by myself,” she says. She’s trying not to lean into what she describes as “becoming Grey Gardens.” But she’s also in love with her surroundings in a profound way: “I was able to create the space that, even as a child, I always wanted to live in.”

What she said when asked about the divorce: “Everything that has transpired has been totally shocking and I think surreal. In a way, I feel like, well, it can only go up from here, because I reached the depth of where I could go.”

2021 was bleak for her: “I had a lot of bad days and medium days. I wouldn’t say I had any good days until the summer.” She pushed herself to do something artistic every day, even if it was small. “I feel so lucky that so much of my work is this mundane, detail-oriented handwork. I’m working with a needle and thread, and it’s like, if I’m not on it, I’m going to prick myself with a needle and f-ck something up…. Just have your whole life fall apart and then develop a hand skill!”

Her photography exhibit/sale was a huge success: “I am in a place where I am able to make money from my art, which is amazing and is great but is also terrifying because I have a very strong inner critic, which is constantly reminding me that this could and will disappear if you don’t continue to make new work. And what if the next project that I work on doesn’t resonate with people in the way that this did?”

She didn’t grow up with money: “People hear Connecticut and they think Greenwich,” she says, clarifying that her parents lived on one income and she attended public school—and she doesn’t take any of what she gained during her years with Mulaney for granted. “I do not want to have squandered that. I want to use the skills that I was able to glean from that time, that I had that time to figure out what I wanted to do. Because I know a lot of people don’t get that.”

Whether she does want kids now: She says that she “always held partnership above having kids.” But also, she says, she is certainly going to freeze her eggs.

She ends on a happier note, like she’s through the worst of the pain and she’s moving forward with her life in her haunted dollhouse. The New York apartment was sold, and presumably, Mulaney kept the LA home (he’s LA-based now). What do you do after your husband relapses, cheats on you and impregnates someone else? So what if she went a little bit mad for a time. I would have too! At least she channeled it into cool art. As for her art… you can see her Instagram here. She has a real eye for composition, and there’s such a feminine and gothic energy to her images.

119 Responses to “Anna Marie Tendler: Everything that’s happened has been ‘totally shocking & surreal’”