Spoilers for The Tinder Swindler
In somewhat inevitable news, the three victims of the Tinder Swindler featured in the popular Netflix documentary have started a GoFundMe account to recoup some of their losses. Ayleen Koeleman, Cecilie Fjellhøy and Pernilla Sjoholm have an official fundraising page where they acknowledge that there are better causes but say they are grateful for the support, both monetarily and financially.

You’re probably here because you’ve heard about our story, and we appreciate you taking the time to search and find this page.

The past few days have been a whirlwind, and we three (Ayleen, Pernilla and Cecilie) have been completely shocked and floored by the flood of compassion and support from everyone. The sheer love is more than we ever expected, and we appreciate you all so much.

After careful consideration, and many chats, we have decided to start this GoFundMe fundraiser. So many people reached out to us asking if we had one, and it hadn’t occurred to us to make one prior to this. However, we’ve spotted plenty of fakes, which makes us uneasy. We don’t want more people getting defrauded.

We realise there are a thousand other worthy causes to donate to, and remain forever grateful if you choose to donate to this one. All we want are our lives back.

Backstory:Shimon Heyada Hayut (who came to us under the pseudonym and fake personality of “Simon Leviev”) and his team of professional con artists, have defrauded all three of us for large sums of money.

If you have the opportunity to help we are forever grateful, but knowing that you’ve even checked out this page in solidarity means the world to us.

As of publication this morning these three women have raised over £83,000. While I don’t consider them a particularly worthy cause, I also don’t begrudge them using their fame like this. This was very gracious and well written and I feel for these women. They were brave to come forward and go public with their stories and are just doing what they have to in order to rebuild their lives. They’ve also surely helped so many other victims.

One criticism I’ve seen of this series is that it doesn’t address the issue of coercive control and abuse. There’s an excellent episode of the podcast Reality Life with Kate Casey featuring an interview with Debra Newell, the woman who married John Meehan aka Dirty John. Newell explained how the narrative around her case left out the way that she was manipulated and controlled by Meehan and how she was legitimately afraid to leave him. In the Tinder Swindler, we saw a small glimpse of this in the threats Simon made to Pernilla over the phone. Considering all the “security” he had around him and how he could easily travel anywhere and knew everything about these women, they weren’t just giving him money for love. As Ayleen explained, many were worried for their safety.

The conman known as Simon Leviev may have started another Instagram account. His main account was made private and then closed last Sunday. Outlets have screenshots of an Instagram story from a now-closed account called shimon_hayut_officialnetflix. It criticizes these women and sounds like it came from him. [via The Independent]. Of course this creep loves the attention and I hope that every post he’s making is incriminating him in a future case. 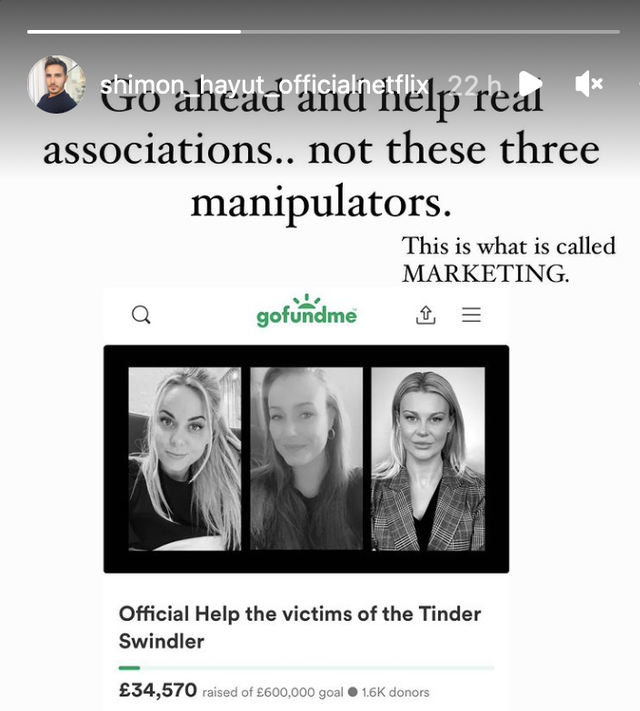