Kim Kardashian’s advice for women in business: ‘Get your f—ing ass up and work’ 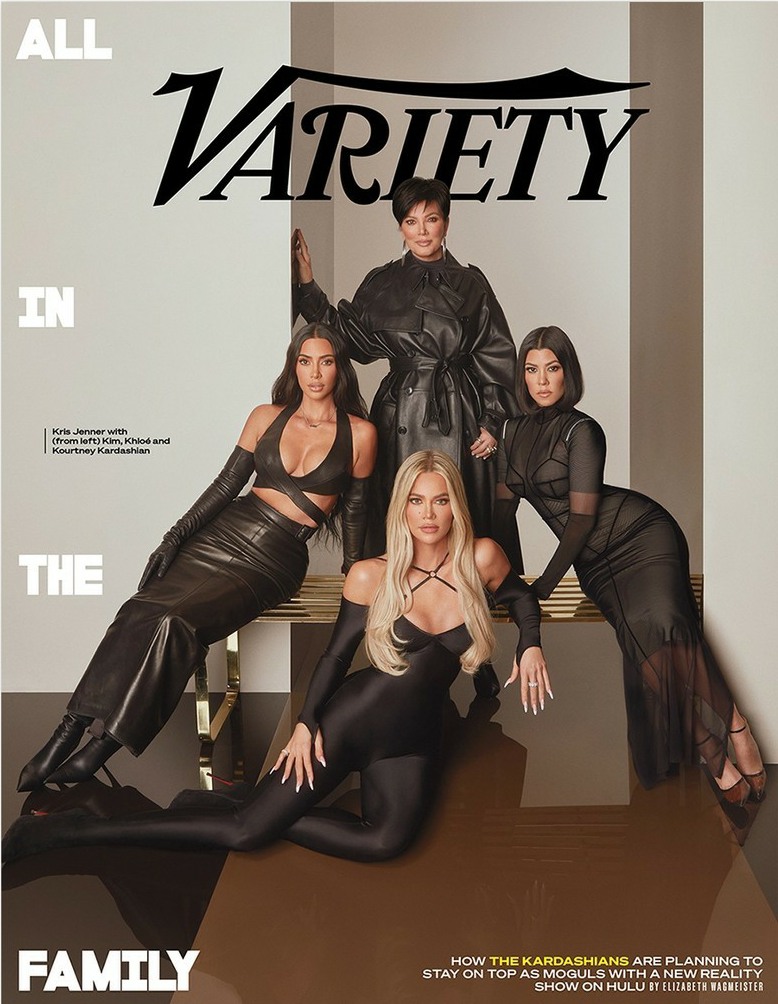 The Kardashians cover the latest issue of Variety to promote their new Hulu reality series, which arrives on April 14. This Variety piece is legitimately bonkers, and it has comments from all of the Kardashian-Jenner women to varying degrees. It’s clear that Kylie and Kendall will be in the show a bit, but they’ve largely outgrown their messy older sisters. Kris Jenner is in her full glory here, being coy about the huge contract the family signed immediately after they left E!. Kourtney and Khloe are both along for the ride, although it definitely feels like we’ll see them both doing more solo projects, and their stories will be less about “the sisters all hanging out.” The craziest parts of the interview are all from Kim’s mouth directly. Some highlights:

Khloe says they’re all getting the same salary: “We are all equals… It definitely played a factor because we give so much of our personal lives up for entertainment,” Khloé says of the financial terms of the contract. “We always have our private family conversations, and we’re pretty brutal, me and my sisters, with what we will settle for or not settle for. But not all money is good money. It has to be a good fit, and Hulu was just the perfect fit for us.”

Kim’s business advice: “I have the best advice for women in business. Get your f–king ass up and work. It seems like nobody wants to work these days.”

Kim on the idea that she’s just famous for being famous. “Who gives a f–k. We focus on the positive. We work our asses off. If that’s what you think, then sorry. We just don’t have the energy for that. We don’t have to sing or dance or act; we get to live our lives — and hey, we made it. I don’t know what to tell you.” Kim says she’s just being “factual”: “With all respect, and with love, I’m not, like, being a bitch.”

Kim on Pete Davidson: “I have not filmed with him,” Kim says when asked whether he’ll appear on the Hulu show. “And I’m not opposed to it. It’s just not what he does… But if there was an event happening and he was there, he wouldn’t tell the cameras to get away. I think I might film something really exciting coming, but it wouldn’t be for this season.” Kim says that when the new show premieres, viewers will see “how we met and who reached out to who and how it happened and all the details that everyone wants to know. I’m definitely open to talking, and I definitely explain it.”

Kim on Kanye: “Being in the public eye and having disagreements publicly is never easy. But I do believe in handling it all privately. I believe in championing publicly and criticizing privately. I don’t think I would ever criticize the father of my children on my TV show. That’s just not really what I’m about, and I just don’t think that would ever make me feel good. I’m always really respectful of what the kids will see. The reality is, we’re always a family. We always will have a love and respect for each other. And even if there’s moments where it might not seem like that, there are so many moments that are super positive. I do think it’s important for people to see that things aren’t perfect all the time, but that they can get better.”

“Get your f–king ass up and work. It seems like nobody wants to work these days…” Is Kimmy Antoinette for real? Work ethic is not the problem, Kim! The problem is pay inequity, lack of opportunity and women being actively oppressed. You can grind and work as hard as possible and still not be “successful” because of structural inequalities, glass ceilings, boys clubs and sexism. Way to put out the entirely wrong message for Women’s History Month. (With all that being said, don’t f–king come in here and denigrate Kim because she’s “only famous because of a sex tape,” that sh-t is sexist as hell too.)

“I have the best advice for women in business. Get your f*cking a** up and work. It seems like nobody wants to work these days. You have to. You have to surround yourself with people that want to work”

171 Responses to “Kim Kardashian’s advice for women in business: ‘Get your f—ing ass up and work’”