Bella Hadid regrets her nose job: ‘I wish I had kept the nose of my ancestors’ 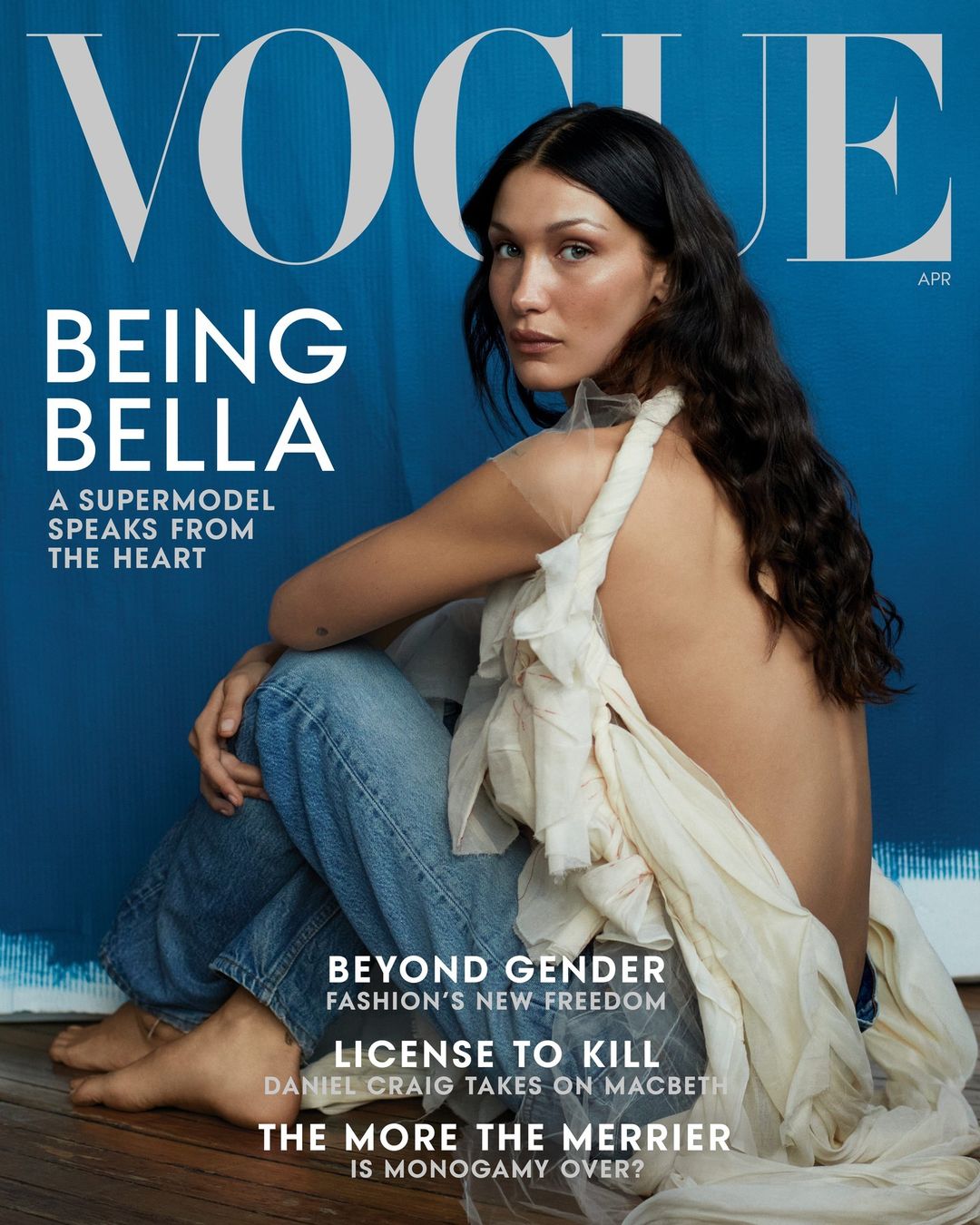 Bella Hadid covers the April issue of Vogue. The editorial is pretty good, but I’m saying that as someone who thinks Bella is gorgeous – to me, she could wear a burlap sack and still look amazing. Much of this interview is just an old-fashioned celebrity profile, and I’m surprised by how much Bella talks and talks to Vogue. She’s 25 years old now and it feels like she’s grown into herself, I think. She knows who she is. She spoke to Vogue about her mental health and anxiety, plastic surgery and the modeling industry. You can read the full piece here. Some highlights:

She’s not how she seems: “The majority of the time when I meet people, they say, I just didn’t think you were going to be nice, that you were going to be this mean, scary dragon lady, or some kind of a sexbot. That’s just not me, and if people have a better understanding of who I am, then I feel less alone within myself.”

Dealing with depression & anxiety for years in silence: “For three years while I was working, I would wake up every morning hysterical, in tears, alone. I wouldn’t show anybody that. I would go to work, cry at lunch in my little greenroom, finish my day, go to whatever random little hotel I was in for the night, cry again, wake up in the morning, and do the same thing.”

She never thought she would be as successful as Gigi: “I was the uglier sister. I was the brunette. I wasn’t as cool as Gigi, not as outgoing. That’s really what people said about me. And unfortunately when you get told things so many times, you do just believe it. I always ask myself, how did a girl with incredible insecurities, anxiety, depression, body-image issues, eating issues, who hates to be touched, who has intense social anxiety—what was I doing getting into this business? But over the years I became a good actress. I put on a very smiley face, or a very strong face. I always felt like I had something to prove. People can say anything about how I look, about how I talk, about how I act. But in seven years I never missed a job, canceled a job, was late to a job. No one can ever say that I don’t work my ass off.”

She started working at 14: “It’s not to say that I didn’t have a very privileged upbringing. But my parents are immigrants who came here and worked for everything they had. I always knew the value of a dollar.”

Her style: “I dress like a little boy. You couldn’t catch me in a dress willingly at this point in my life.”

The modeling industry: “I’ve had girls in my lap crying to me at four in the morning, still at fittings for a show when they have to be at another show at 7 a.m. Completely destroyed, hair burned off, haven’t eaten anything, exhausted to the point where they’re shaking. Finally girls are standing up about sample sizes, but when I first started seven years ago, I couldn’t fit into Saint Laurent. And I remember a stylist talking about my weight because I couldn’t zip up. Looking back, I think, yeah, because a Saint Laurent sample size from the runway was just not a real size for anybody. But then you think there’s something wrong with you, and no one around you is saying, no, no, you’re fine, don’t worry, it’s a small size. They’re kind of just looking at you like”—she smirks—“I guess we’re going to have to put something else on. And you’re thinking, I guess it’s me then.”

Her nose job: When Bella was 14, she had a nose job. It’s a decision she regrets. “I wish I had kept the nose of my ancestors. I think I would have grown into it.”

The nose job was the only thing she had done: “People think I fully f–ked with my face because of one picture of me as a teenager looking puffy. I’m pretty sure you don’t look the same now as you did at 13, right? I have never used filler. Let’s just put an end to that. I have no issue with it, but it’s not for me. Whoever thinks I’ve gotten my eyes lifted or whatever it’s called—it’s face tape! The oldest trick in the book.”

Do you think she’s had anything else done besides the nose job? I don’t know. Maybe it’s just wigs and face tape and makeup. Those are her real lips?? Okay. And do not allow 14-year-olds to get nose jobs unless there’s something really wrong with their noses! She probably would have grown into her birth-nose, or she could have waited and gotten a nose job which wasn’t so… obvious?

Peppered within this Vogue piece, there are several comments from modeling and fashion insiders about how hard Bella works and how much respect she has within the industry. I believe that too – I remember reading something about all of the nepotism models and their reputations, and everyone was basically like ‘Kendall is awful but Bella is a dream.’

104 Responses to “Bella Hadid regrets her nose job: ‘I wish I had kept the nose of my ancestors’”