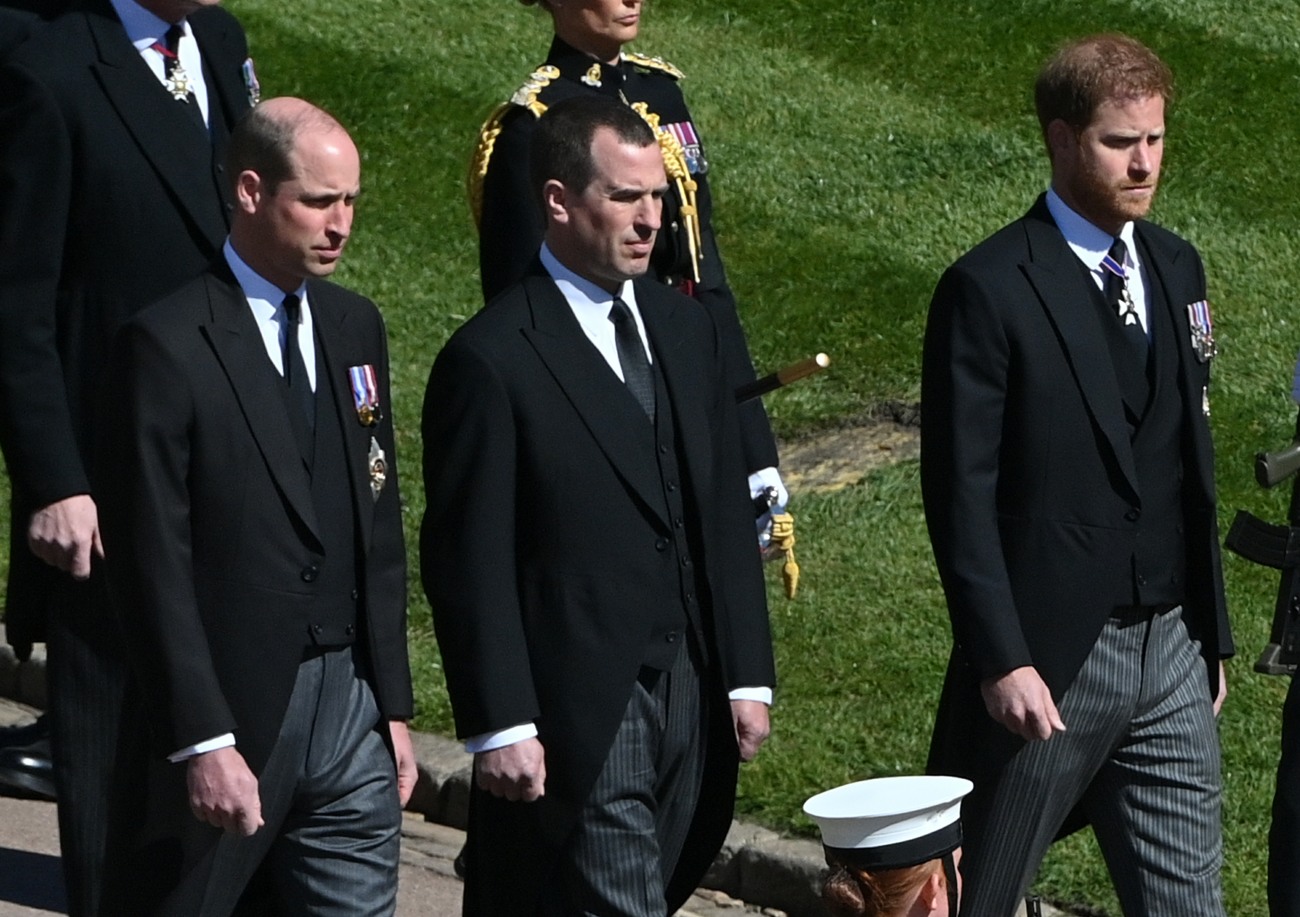 I’m writing this up because I don’t want it to be lost in the larger shuffle of royal gossip. On Friday, the Daily Mail published another column from Richard Kay, a favorite of both Prince William and Prince Charles. Kay must have been getting an earful from both Kensington Palace and Clarence House in the wake of Harry’s Today Show interview. Because Kay completely misrepresents Harry’s Today interview, let me just say this – Harry never claimed that he was the Queen’s favorite grandson. He did indicate that they have a special relationship, that he cares about his grandmother a great deal and that he’s worried about the people around her. In addition to all that, he spoke about his late mother and he got choked up describing how he can feel her in his life so much in the past two years. Surely, no one will try to fact-check Harry’s emotions, right? Wrong. Kay is here to inform everyone that William is incandescent at the thought that Harry is like Diana, and everyone knows that the Queen’s favorite grandchild is Peter Phillips.

William is mad that Harry is Diana’s son too: For several years, through a combination of natural diffidence and an unwillingness to make relations with his brother even worse than they already are, William had silently watched as Harry cloaked himself ever more firmly in Princess Diana’s legacy.

William has been trying to invoke Diana’s mother constantly too: If this was designed to halt the torrent of comparisons between the wronged Diana and the son who believes he, too, has been the victim of an uncaring institution, William must have been bitterly disappointed. Harry has barely drawn breath since, frequently invoking his mother’s name with regard to the frustrations he and Meghan have faced, and drawing comparisons between their own unhappiness with royal life and Diana’s. (Although it is worth pointing out that, unlike Harry, Diana, for all her difficulties, did not abandon her country and continued to serve the monarchy.)

Now everyone’s mad that Harry said he & the Queen enjoyed a unique relationship. Of all his recent utterances, it is certainly one of the most breathtaking. Not only does it ask us to put aside the controversy generated by his inflammatory remarks about racism within the Royal Family, it also invites us to believe that of all the Queen’s eight grandchildren, he occupies a distinctive position as her favourite. As one of the Queen’s longstanding staff told me: ‘No longer content to claim a special status with his mother, he now seems to be mythologising his relationship with his grandmother. Would she recognise this description? I very much doubt it.’

The Queen’s actual favorite grandchild: The Queen has always been scrupulous to avoid any accusations of favouritism when it comes to her grandchildren, but insiders insist that if there was a ‘special one’ it would be not Harry but Princess Anne’s son Peter Phillips, 44, her first grandson. ‘She has always been close to Peter and admires the way he and his sister Zara handled themselves as grandchildren of the monarch but without royal titles,’ says an old friend of the Queen. ‘Like William and Harry and Princesses Beatrice and Eugenie, Peter and Zara were children of broken homes, but were somehow more exposed because of Anne’s decision that they should not have titles. She thinks Peter especially has inherited the resilience that is so characteristic of Anne. She sees him as dependable.’

Kay disputes the idea that Harry makes the Queen laugh: There is no doubt their ability to laugh at the same things has underpinned the relationship. But the fact is there has been precious little laughter since Harry and Meghan began releasing their ‘truth bombs’ on the Royal Family from cossetted exile in California. ‘She certainly used to worry about Harry, what with his moods and his scrapes, but because, like Prince Andrew, he fought for his country, she has always been enormously proud of him,’ a close figure tells me. ‘She also was always very conscious of his status as second in line to William, just as Princess Margaret was to her. But this didn’t confer any favouritism and after all she has hardly seen him in the last two years.’

“Diana, for all her difficulties, did not abandon her country and continued to serve the monarchy” – she would have if she had lived. She would have abandoned that toxic place in a few years. She was already planning her next steps, and her plans did not involve “serving the monarchy” or sticking around to watch Charles establish Camilla as the new Princess of Wales. It’s also worth noting that Diana’s service to the monarchy was basically over too – she was pushed out of her royal patronages following her divorce and she was planning to devote her energy to several core issues, like landmines and AIDS.

As for the rest of it… it’s William, right? William’s mad that Harry keeps reminding everyone of the real Diana, and not the button-covered Diana cosplay of William’s wife. William’s also mad that Harry seems to maintain a warm relationship with their grandmother, and so this is William shrieking “she loves Peter more than you!!!” What a sad, petty man. You know what else is notable? Even in William’s rages and delusions, he knows that he’s no one’s favorite. He’s not the Queen’s favorite, or Charles’s favorite or anyone else’s. 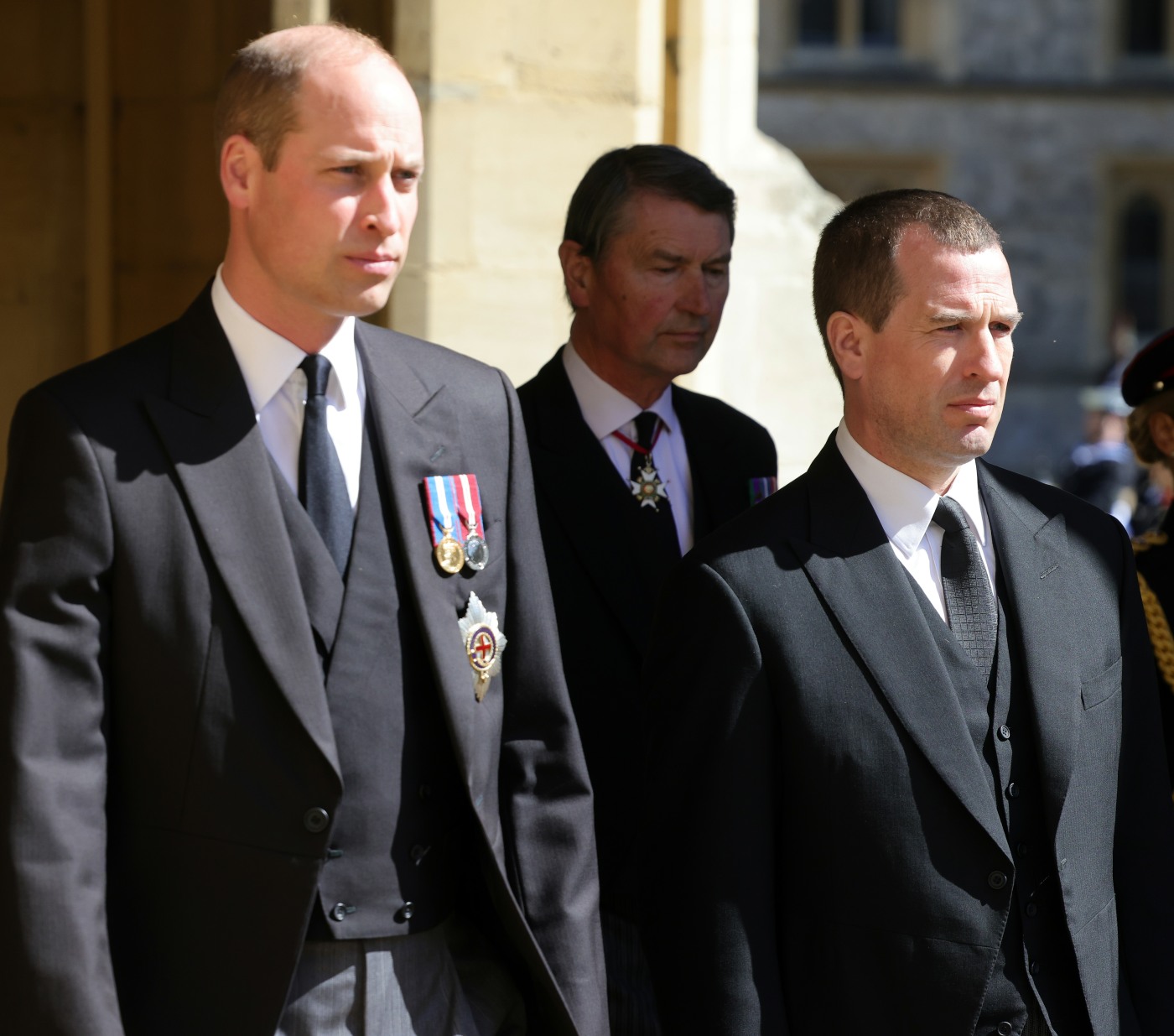 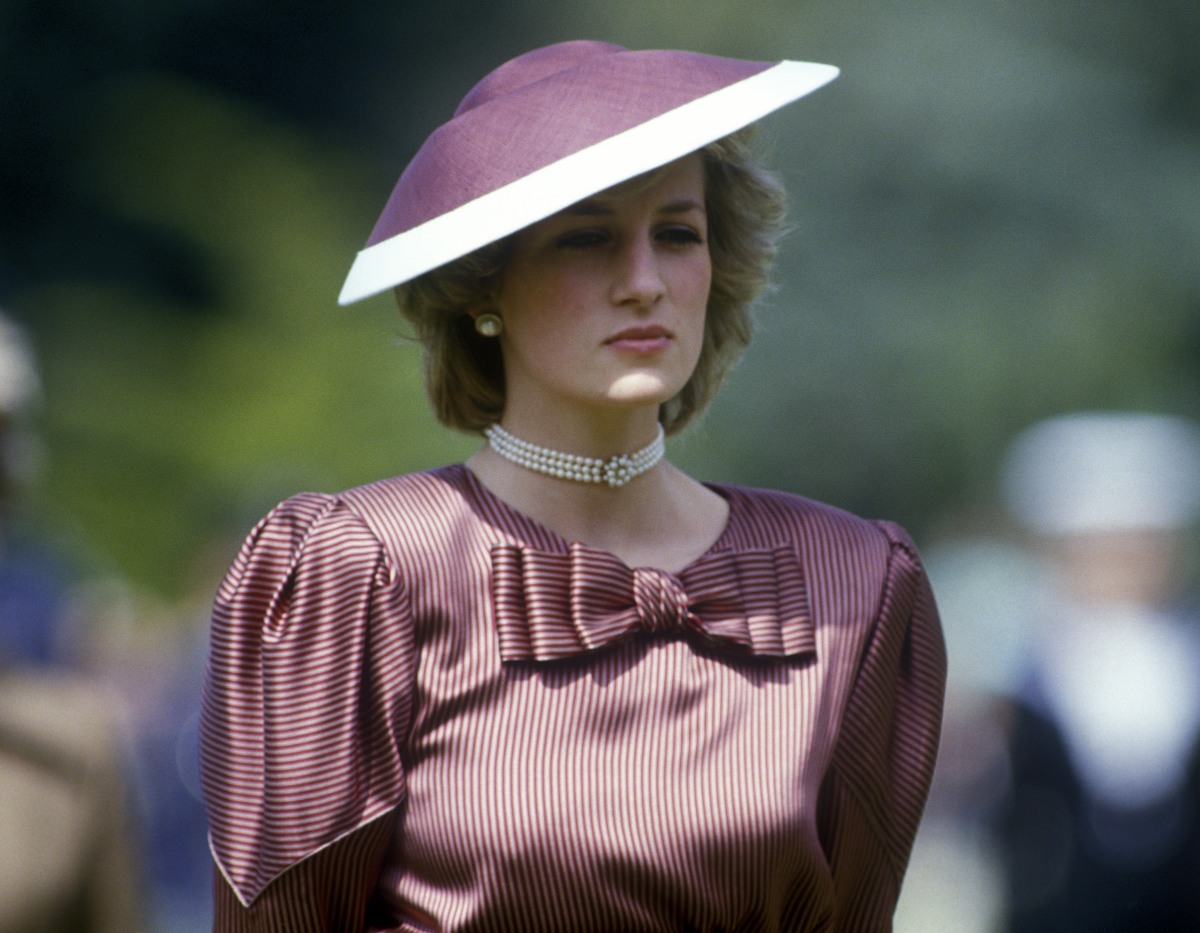 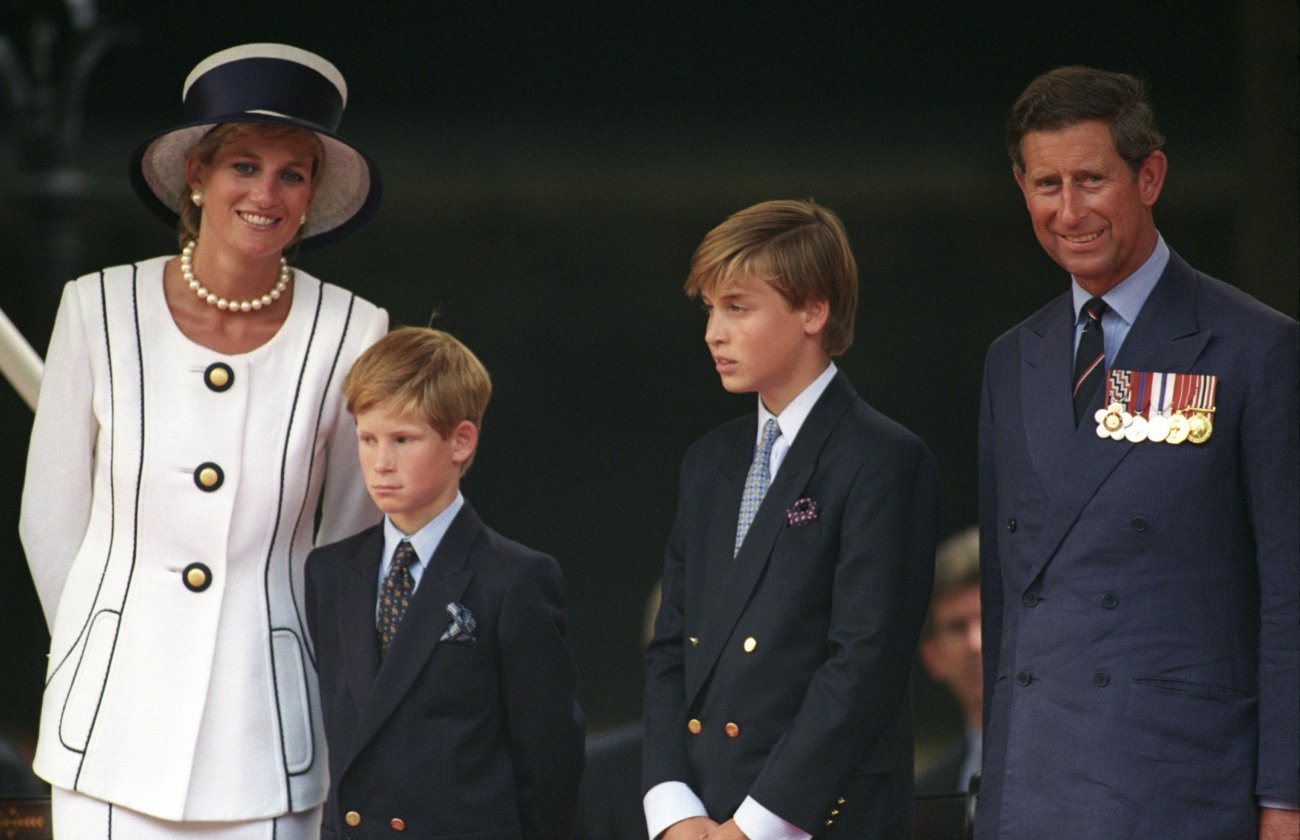 North America Rights Only – Windsor, UK -20210417-Prince Philip Duke of Edinburgh Funeral at Windsor Castle -PICTURED: Prince William and Prince Harry -PHOTO by: PA Images/INSTARimages.com Disclaimer: This is an editorial, rights-managed image. Please contact INSTAR Images for licensing fee and rights information at sales@instarimages.com or call +1 212 414 0207. This image may not be published in any way that is, or might be deemed to be, defamatory, libelous, pornographic, or obscene. Please consult our sales department for any clarification needed prior to publication and use. INSTAR Images reserves the right to pursue unauthorized users of this material. If you are in violation of our intellectual property rights or copyright you may be liable for damages, loss of income, any profits you derive from the unauthorized use of this material and, where appropriate, the cost of collection and/or any statutory damages awarded For images containing underage children: Be advised that some Countries may have restricted privacy laws against publishing images of underage children. Inform yourself! Underage children may need to be removed or have their face pixelated before publishing

WINDSOR, ENGLAND – APRIL 17: Prince William, Duke of Cambridge Vice-Admiral, Sir Timothy Laurence and Peter Phillips during the funeral of Prince Philip, Duke of Edinburgh at Windsor Castle on April 17, 2021 in Windsor, England. Prince Philip of Greece and Denmark was born 10 June 1921, in Greece. He served in the British Royal Navy and fought in WWII. He married the then Princess Elizabeth on 20 November 1947 and was created Duke of Edinburgh, Earl of Merioneth, and Baron Greenwich by King VI. He served as Prince Consort to Queen Elizabeth II until his death on April 9 2021, months short of his 100th birthday. His funeral takes place today at Windsor Castle with only 30 guests invited due to Coronavirus pandemic restrictions.,Image: 606159225, License: Rights-managed, Restrictions: , Model Release: no, Credit line: Chris Jackson / Avalon

The Funeral of the Duke of Edinburgh St Georges Chapel Windsor Castle. The Prince William ,Peter Phillips and Prince Harry in the procession to the church,Image: 606167506, License: Rights-managed, Restrictions: *****PLEASE NOTE THESE PICTURES ARE NOT FOR SYNDICATION AND ONLY FOR USE IN NTHE PAPER -NOT ONLINE >, Model Release: no, Credit line: PAUL EDWARDS / Avalon

Prince Harry walking in the procession at Windsor Castle, Berkshire, during the funeral of the Duke of Edinburgh., Credit:Victoria Jones / Avalon Where: United Kingdom When: 17 Apr 2021 Credit: WENN/Avalon *****ONLY AVAILABLE FOR AGREED WENN SUBSCRIPTION DEALS*****

The Duke of Cambridge, Peter Phillips and Prince Harry walking in the procession at Windsor Castle, Berkshire, during the funeral of the Duke of Edinburgh., Credit:Victoria Jones / Avalon Where: United Kingdom When: 17 Apr 2021 Credit: WENN/Avalon *****ONLY AVAILABLE FOR AGREED WENN SUBSCRIPTION DEALS*****

The Duke of Cambridge walking in the procession at Windsor Castle, Berkshire, during the funeral of the Duke of Edinburgh., Credit:Victoria Jones / Avalon Where: United Kingdom When: 17 Apr 2021 Credit: WENN/Avalon *****ONLY AVAILABLE FOR AGREED WENN SUBSCRIPTION DEALS*****

(From R) Britain’s Prince Andrew, Duke of York, Britain’s Prince William, Duke of Cambridge, Peter Phillips, Britain’s Prince Harry, Duke of Sussex and Vice Admiral Timothy Laurence march behind the coffin during the ceremonial funeral procession of Britain’s Prince Philip, Duke of Edinburgh to St George’s Chapel in Windsor Castle in Windsor, west of London, on April 17, 2021. – Philip, who was married to Queen Elizabeth II for 73 years, died on April 9 aged 99 just weeks after a month-long stay in hospital for treatment to a heart condition and an infection., Credit:JUSTIN TALLIS / Avalon Where: United Kingdom When: 17 Apr 2021 Credit: WENN/Avalon *****ONLY AVAILABLE FOR AGREED WENN SUBSCRIPTION DEALS*****