Bower: Meghan Markle was ‘hysterical’ about her 2017 Vanity Fair cover 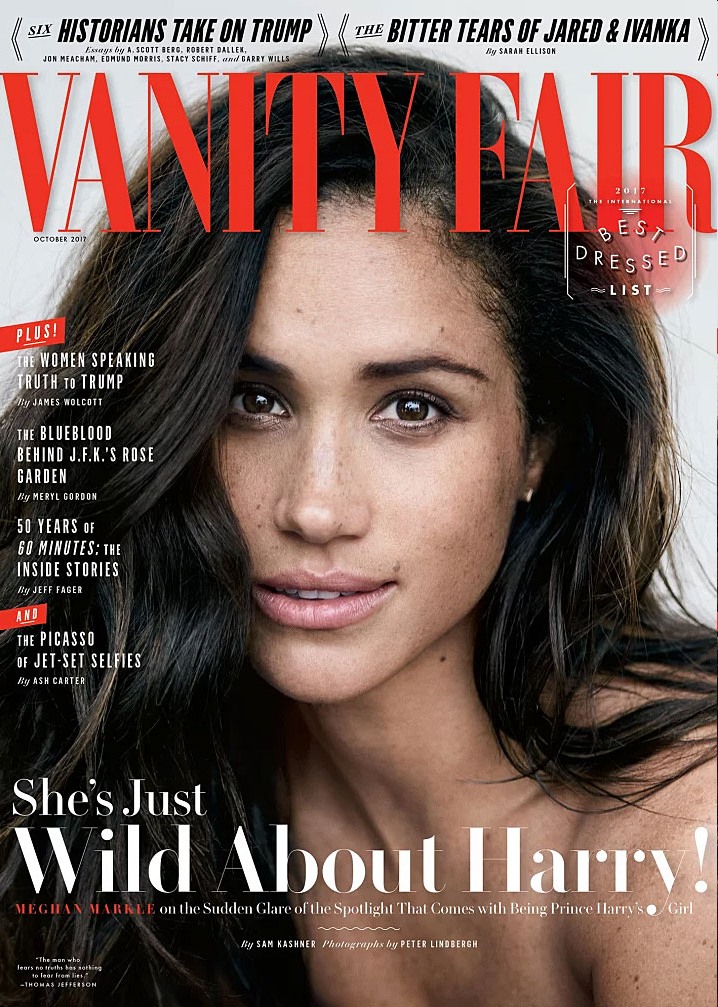 It’s really, really funny to watch Salt Island obsess over Sussex minutiae constantly. The Duke and Duchess of Sussex exited Isla de Saltines officially in March 2020. Meghan only moved to London in the fall of 2017. She spent less than three years there and they will pick apart every single moment she spent there. And then some. Today we’re talking about something Meghan did before she even moved to London and before she and Harry got engaged. Meghan appeared on the cover of the October 2017 issue of Vanity Fair, which was released in early September of that year. The interview was conducted in June 2017, as Meghan was still working on Suits in Canada at the time. Meghan went on the record about dating Harry and how they’re in love and really happy together. You can read the VF piece here.

As everyone said at the time, no one in the palace was mad about the Vanity Fair cover story. Meghan didn’t spill any secrets and it served as a preview of coming attractions, meaning Harry and Meghan’s engagement, which would become official several months later. There were no stories about how Meghan’s VF piece “blindsided the palace” or “how dare this American speak about a prince of the realm.” That was because – I still believe – Meghan only agreed to the Vanity Fair cover story because she had the palace’s permission. If the palace had said no, she probably would have turned it down. Well, this history is being reanalyzed by Tom Bower in his new book, Revenge: Meghan, Harry and the war between the Windsors. Bower’s take is very stupid.

Meghan Markle called her PR team in hysterics after Buckingham Palace reacted with ‘fury’ to her Vanity Fair interview about Prince Harry, a bombshell new book has claimed. Tom Bower, journalist and author of ‘Revenge: Meghan, Harry and the war between the Windsors’, says Meghan was ‘ecstatic’ when she was asked to appear on the cover of Vanity Fair’s September 2017 issue and do an interview with the magazine. But when the magazine ran with the headline ‘Wild About Harry’ on its cover – focusing on Meghan’s relationship with the British prince rather than her work as an actor, activist and philanthropist – Bower says the Palace was taken aback. Within hours of the magazine’s pre-publication copies being sent to Buckingham Palace, Bower says Meghan phoned her PR firm and ‘hysterically’ told them of the Palace’s fury.

Bower reports that Meghan was furious that the piece was not more focused on her philanthropy but says this was due to the fact Vanity Fair researchers were unable to substantiate two key stories she had told about her activism as a young child. Keleigh Thomas Morgan, a partner at Meghan’s PR firm Sunshine Sachs, organised the interview, which was conducted by Sam Kashner – a long-standing contributing editor at Vanity Fair, who admitted before the interview that he had no idea who Meghan was.

According to Bower, Kashner was told Meghan was under strict orders from both Harry and her PR firm to steer clear of sensitive subjects – such as race, Donald Trump and her relationship with the prince. The interview was done at Meghan’s home. Bower says Kashner was uneasy knowing that Meghan had been told to be careful with what she told him.

‘Both knew that a lot was riding on the interview, and both understood that the critical issue of Harry had been vetoed,’ Bower says in his new book, according to The Sun newspaper. ‘Meghan spoke, he realised, knowing that she had the winning ticket but avoiding giving an impression of triumphalism.’

‘Like a thunderclap, the interview triggered sensational reactions: Meghan had used her relationship with Harry to promote herself,’ he says. ‘The Hollywoodisation of the royal family had sealed Meghan’s fate as Harry’s fiancée.’

According to Bower, within hours of the pre-publication release, Meghan rang Ken Sunshine and Keleigh Thomas Morgan telling them of the Palace’s ‘fury’. She said the agency should have had her comments about her relationship with Harry removed, raising fears she would fire them over the cover. Ken Sunshine reportedly told Vanity Fair’s editor that he would have to ‘deal with the Queen on this’. Ken Sunshine was told that Meghan only got the cover ‘because of who she was likely to marry,’ Bower writes, and not on her own merit.

Something I’ll note, for the record, is that this is the first time anyone has ever claimed that “the palace” had an issue with Meghan’s VF cover story. In all of the accusations lobbed at Meghan, all of the stories written about her since the Sussexit, all of the completely random gossip about what Meghan did or said at various times, we’ve never heard “and the palace was so mad about her Vanity Fair interview!” Which means that, despite whatever nonsense Bower reports, it wasn’t seen as any big deal within the palace communications offices, likely because they approved it from the start. At this point (June 2017), Harry had already made it known that Meghan was “the one” and that he planned to propose. Meghan was already “in the royal fold” in some sense, and working with Kensington Palace’s communications office on certain issues.

What’s also notable is that… the whole reason the cover was timed for that moment wasn’t about the royals at all, she was on the cover to coincide with the new season of Suits. Meghan was a private citizen, an actress, doing press for her show. Anyway, I doubt Meghan was hysterical about any of it. She knew what she said in the interview and she had been around long enough to know what the headline would be.

Despite being one half of a royal power couple, Meghan Markle notes, “nothing about me changed” https://t.co/TRelFR1m7X pic.twitter.com/99QUlUQoaF 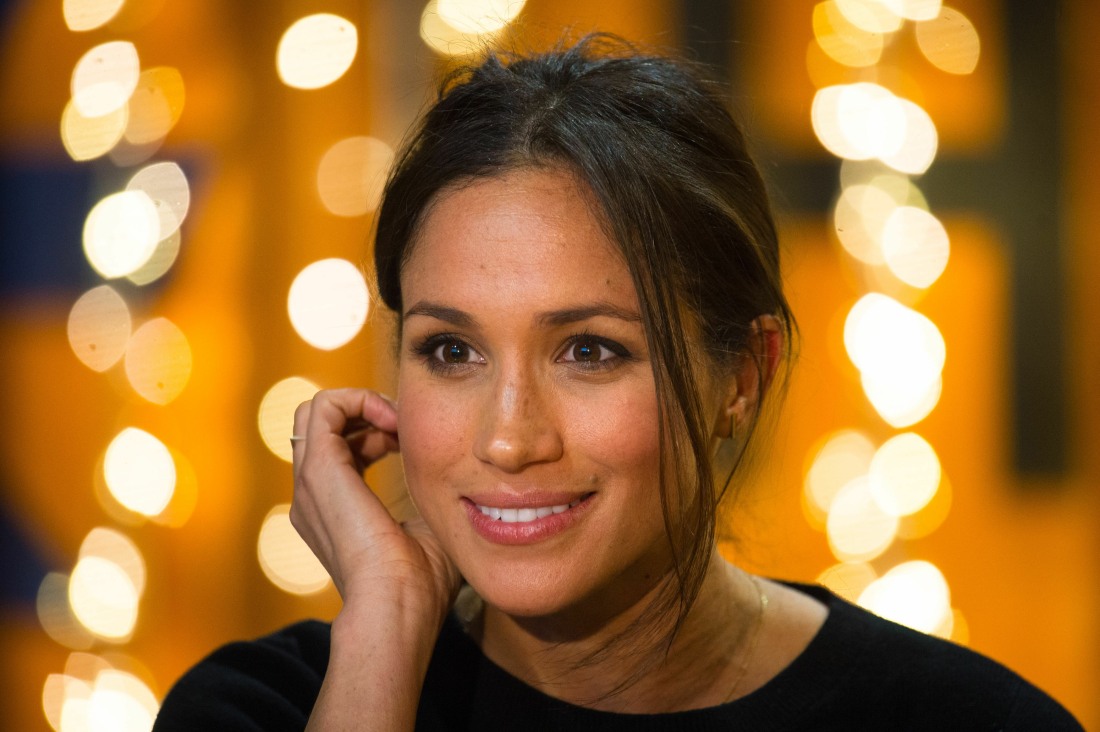 Meghan Markle during a visit to youth-orientated radio station, Reprezent FM, in Brixton, south London to learn about its work supporting young people. The Reprezent training programme was established 10 years ago in response to the rise in knife crime, to help young people develop and socialise through radio.

66 Responses to “Bower: Meghan Markle was ‘hysterical’ about her 2017 Vanity Fair cover”