Demi Moore on her hair: ‘It’s stressful even having someone touch it’ 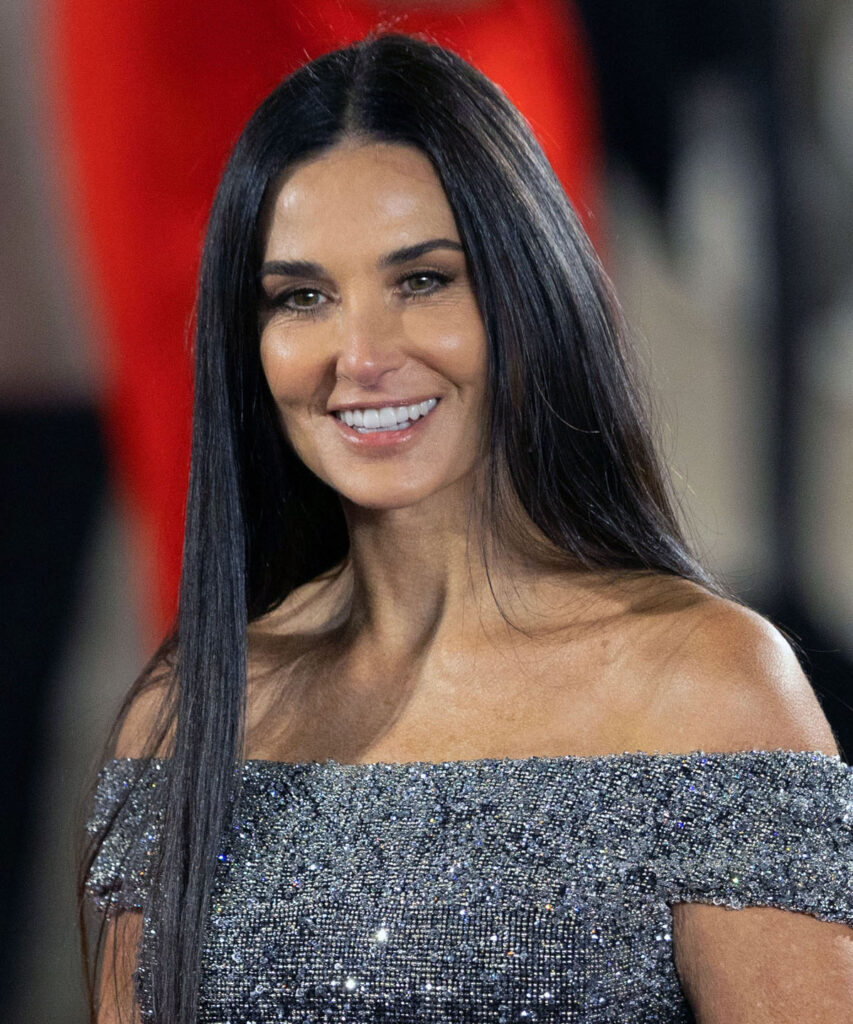 You all got mad at me for defending Demi Moore last week. I hate to break it to you but I’m about to do it again. Demi turns 60 next November and her talking point on the subject is that age is but a number. My takeaway from that is that the generations before us have slowly been eroding the preconceived rules put in place for women in their later years, allowing us to redefine how we want to look and act in our “old age”. One such rule was hair. It used to be that women were expected to cut their hair above their shoulders after a certain age. That long hair was a young ladies’ game. Demi, who has famous locks, decided she’s keeping her hair long and dark even into her sixth decade. She said it just feels more “her”. And to keep it looking good, she tries to do as little as possible, including letting anyone touch it.

Demi Moore is the heart — and hair — of Hollywood.

In this week’s issue of PEOPLE, the screen and fashion icon opens up about her new Andie swimwear capsule (which she designed and modeled herself!), looking ahead to her milestone 60th birthday in November and her famous, hipbone-grazing hair.

Moore, 59, admits that while she used to be a total hair chameleon, she’s now feels most herself with her long mane.

“I’ve done everything to my hair. I’ve shaved it. I’ve dyed it. I’ve had a bob. When I’m not working, I try to do as little to it as possible,” she tells PEOPLE. “It’s stressful even having someone touch it. If I don’t have anywhere to go, I don’t put heat on it—I just try to let it do its own thing. And I don’t wash it too often.”

As for getting haircuts, the star says they are more like “dustings” to keep her strands healthy.

“I get regular tiny trims,” she tells PEOPLE. “The rest comes from the inside out. You have to eat well, all those things.”

Moore famously shaved her head for the 1997 film G.I. Jane, but says at this point in her career she’d be “hard-pressed” to pull off another drastic hair move.

“I think now that I’m older, I also know, I don’t have anything to prove. So if they really need my hair different, they can give me a wig, she tells PEOPLE, adding that it’s “also not as clear how it would grow back!”

I’d actually forgotten all the different hair styles Demi’s had throughout her career. I remember the G.I. Jane buzz, of course, but I forgot all the others until she mentioned them. I also associate her the most with her long, dark hair. And whatever she’s doing to it, it looks good, at least in photos. Regular trims are smart at any age because frayed ends are the number one cause for hair damage. Heat damage is also a lot for hair to take but Demi’s right, older hair doesn’t bounce back as quick so I, too, don’t touch mine if I don’t have to. Since my hair is fairly healthy, I also only wash it a couple of times a week (I take a shower almost every day though, let’s not go there). Demi did name check Kevin Murphy Hydrate Me Rinse as her go to hair product, in case you’re wondering how she keeps it so shiny.

As for 60-year-old Demi wearing hip-length hair, I don’t have an issue with it. I assume her hair is dyed. Those are the standards I am arguing against, that older folks should be able to push back on. I don’t dye my hair because I have a glorious rooster comb of grey sprouting from my cowlick. But I did just opt to keep my below-the-shoulder hair during my last haircut. I actually feel comfortable in both short and long hair but right now I’m feeling a little more witchy with my long, wavy locks. I’m sure there are some in the over-50 club that think I’m being silly but *shrugs* I’m not really living my life for them. I also feel a little like Demi in that sometimes I wonder when my coif is just going to decide not to grow back so I’m keeping it around as long as I can. 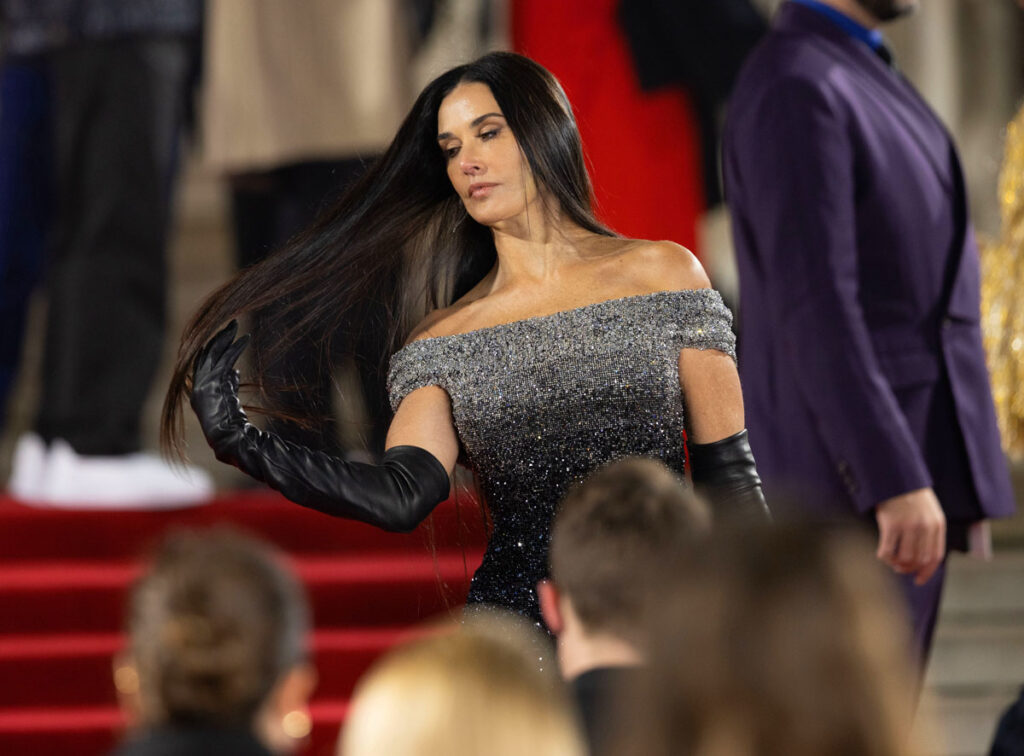 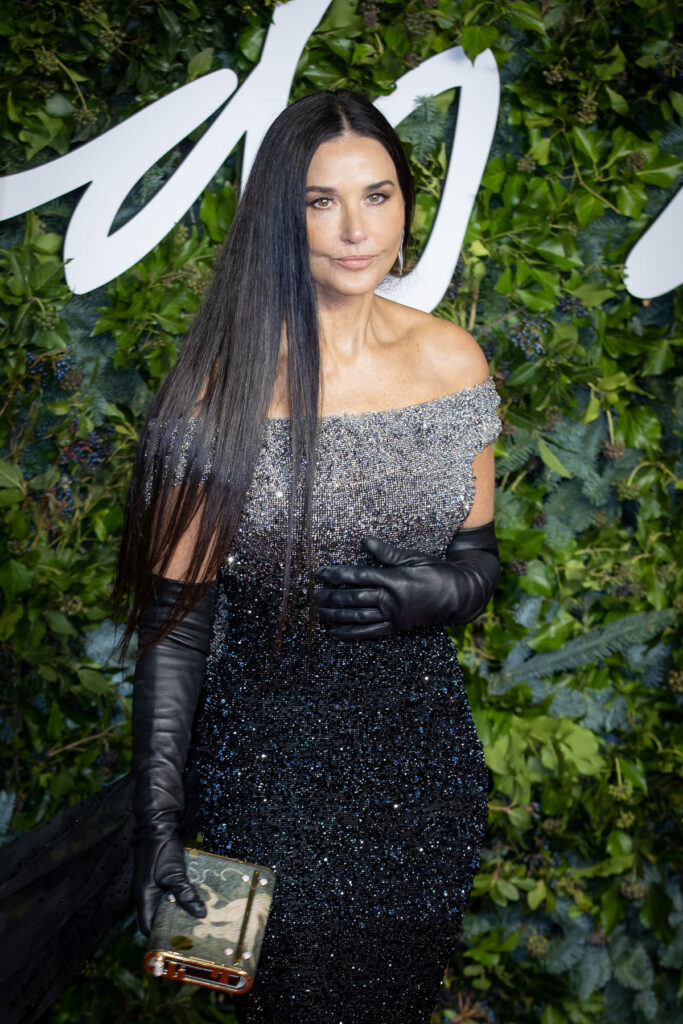 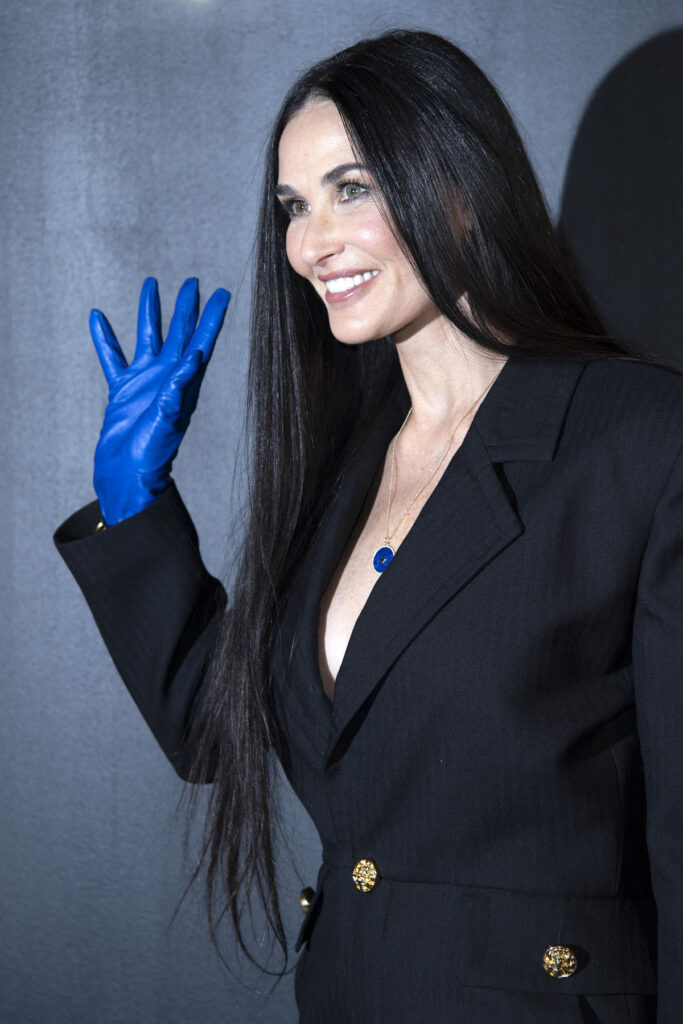 68 Responses to “Demi Moore on her hair: ‘It’s stressful even having someone touch it’”