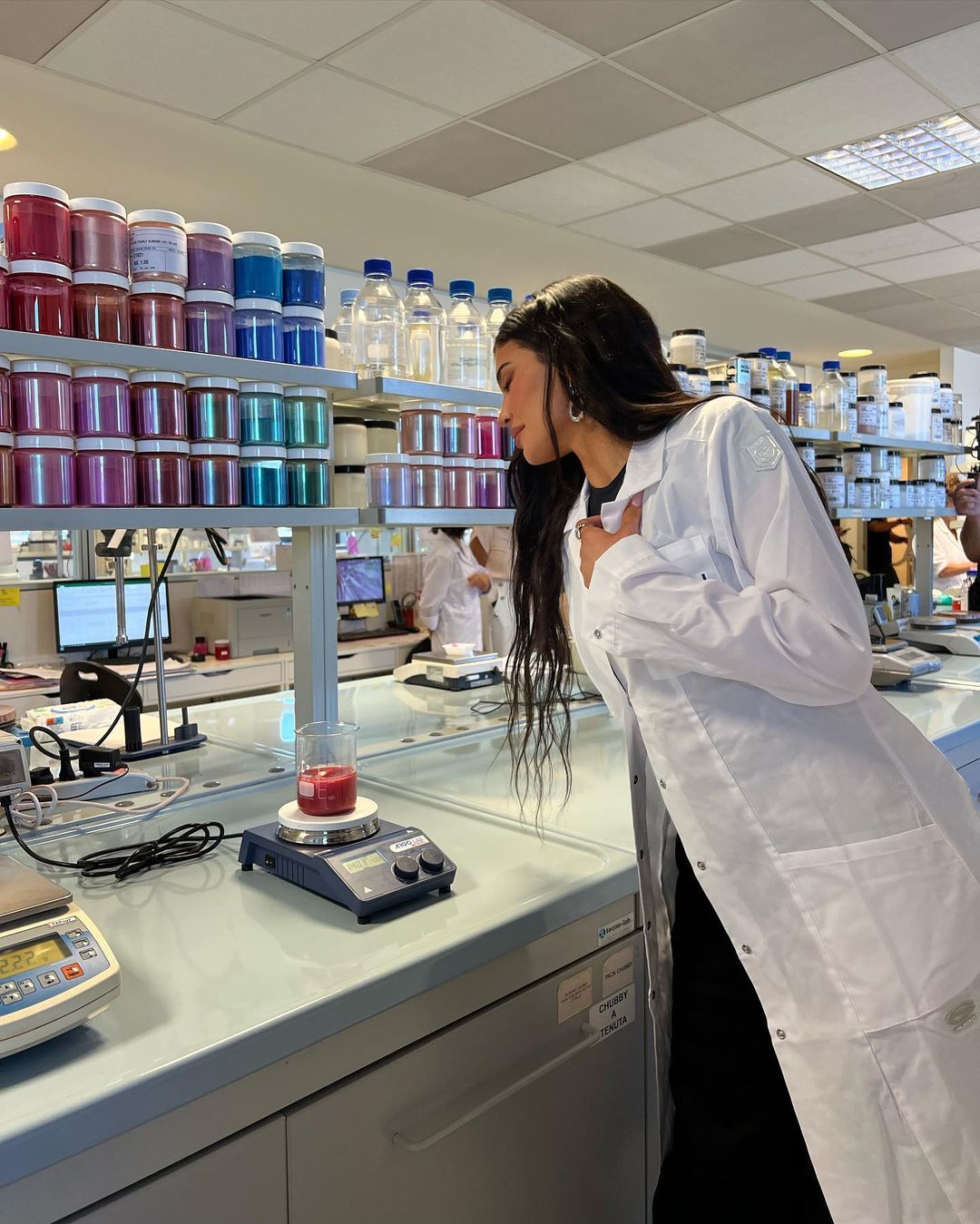 On Thursday, Kylie Jenner posted this Instagram (which I cannot embed). She appeared to be standing in her Kylie Cosmetics lab, playing around with beakers and material for her cosmetics. Note that Kylie is not wearing gloves, nor did she remove her jewelry, nor did she pull her hair back or put her hair in a hairnet. She’s just “working” in the lab without any protective gear on. Her post even said she was in the lab: “in the lab creating new magic for you guys.” All hell broke loose when cosmetic developer Kevin James Bennett reposted the photos and called her out for her unsanitary behavior:

I’m a cosmetic developer and work with cosmetic manufacturers (and their labs) as part of my job. I have very short hair, and I’ve NEVER been allowed into the lab or onto the manufacturing floor without a hair net, shoe covers, mask…and disposable GLOVES.

Kylie is gaslighting her followers into thinking she is creating cosmetics. And I’d like to know what ignorant manufacturer (in Italy) let her stage this photo-op in their lab and on the manufacturing floor – without following proper sanitation protocols. I need the name because I want to make sure my clients NEVER work with them.

Folks, this is not the way we create cosmetics and misrepresents how our industry works. Credible manufacturers follow STRICT sanitation protocols to protect you.

Harsh… but completely fair. Just seeing Kylie in there, gloveless and with loose hair is pretty gross and unsanitary. Kylie responded to Bennett quickly:

Kylie Jenner bashed haters criticizing her recent lab photos for being “unsanitary,” accusing them of “spreading false information.” Jenner wrote, “Kevin — this picture is not taken in a manufacturing facility. i would never bypass sanitary protocols and neither would any other celeb or beauty brand owner.”

After agreeing that those actions would be “completely unacceptable,” the reality star wrote that she was in a “small, personal space” in the pictures posted Wednesday.

“[I was] creating my own fun samples and taking pictures for content nowhere near the mass manufacturing,” the “Keeping Up With the Kardashians” alum went on to write. “No one is putting customers at risk !” She concluded, “Shame on you kevin for spreading false information !!!!”

In Bennett’s reply to Jenner, he accused the “Kardashians” star of “serious[ly] gaslighting” her followers.

“So you were standing on a platform, looking into an expensive homogenizing kettle that had processed at least 50 liters of a complexion product (the product still covering the mixing paddles) without PPE or your hair tied back , wearing a @weareregi lab coat? But this is not a cosmetics manufacturing facility?” he asked. “It’s a personal space?”

Sources exclusively told Page Six that Jenner was not on the production floor when the pictures and videos were taken as she was simply reviewing colors and ideating on new concepts.

Imagine thinking this is some kind of defense: “[I was] creating my own fun samples and taking pictures for content…” Basically, Kylie was wandering around a cosmetics lab and manufacturing plant, “creating samples” and creating “content” for her social media, and she thinks that is a solid defense for why she wasn’t adhering to product-safety and sanitary codes. Bennett has every right to be outraged and this is a huge mess.