On Sunday, we covered Tom Hiddleston’s Loki-tastic (Lokitasm?) appearance at Comic-Con, which was one of the most buzzed-about events of the whole nerd-fest. Tom appeared in character as Loki at the panel discussion for Thor 2: The Dark World, and he commanded the nerds to bow down to him. They did. I thought it was pretty cool, especially as a way to reward the die-hard fans who show up at Comic-Con. Do I find Tom to be cloying and twee? Of course. But on this, I was on his side. It was a great stunt and he sold it beautifully. After the stunt/Loki theatrics, Tom spoke to the Los Angeles Times about how the whole thing came to be.

LAT’s Hero Complex: How much fun was that?
TH: It was fun. It was absolutely amazing. It’s only my second time in Hall H. The last time I was in Hall H was three years ago, Comic-Con 2010, with Kenneth Branagh’s “Thor.” It was just a panel with Chris Hemsworth and Natalie Portman and myself and Kat Dennings and Ken Branagh. Three years ago, people, I think, weren’t that familiar with the character of Thor and certainly didn’t know what to expect from the film. So to come back, with all of what’s happened in the space in between, is kind of amazing really. Loki’s kind of been taken to the hearts of the home team. To go out there in costume, adrenaline was coursing through my body in a way that I haven’t had in a while.

HC: There are so many people who come here to celebrate the new movies, but rarely do they get to see an onstage performance involving the characters.
TH: Indeed. I went to drama school to train as a stage actor, but to six-and-a-half-thousand strong? That’s the biggest gig I’ve ever played for sure.

HC: Whose idea was this?
TH: [Marvel movie chief] Kevin Feige. He called me about two and a half weeks ago and said, “So, Tom, I’ve just got an idea that I’m just going to run by you.” I knew I was going to come to Comic-Con, but I didn’t know I was going to come in character. He sort of said, “How about you just come in character and you don’t break character at all and you introduce the footage? Give a whole kind of encore to the two films?”

I was so excited, but I initially got a little worried because I didn’t want to say things that Loki wouldn’t say. I didn’t want to say “Here’s the clip” or “Roll trailer.” I figured it had to be within the integrity of the character. I wrote some things. We tried to make it really simple; I didn’t want to overstay my welcome. It was cool, it was great. It was basically a top-secret stealth mission by Kevin and myself. Nobody else knew about it. I just got an email from Chris Hemsworth this morning, who didn’t know about it. Kevin just said to everyone else, “We’re not doing a panel, we’re just going to show the trailer.” I really wanted it to be a surprise, and that’s the hardest thing in our world now is to keep something so secret that it’s actually a surprise. I had to fly in — this is no joke — I flew in to San Diego from London as Jango Fett from the “Star Wars” films because I knew that if I was seen in San Diego there would be a picture on Twitter or Instagram or Facebook, “I’ve just seen Thomas in the San Diego airport, I’ve just seen him in the hotel. He’s obviously here for ‘Thor 2.’”

HC: Did you already have a Jango Fett costume?
TH: No, I had to go and find.

HC: Why that character?
TH: I’m 6 foot 2. It was the only one that fit in the costume shop. They were sold out of Stormtroopers.

HC: Why did you pick a character from the “Star Wars” universe? Is that a subtle message to J.J. Abrams?
TH: No (laughs). I was just like, no Marvel. If I come as Iron Man, it’s too obvious. But if J.J. wants to read it as a subtle message, I’m fine with that.

HC: Did it feel different for you to put on the costume and perform Loki in front of a live audience rather than play him on a film set?
TH: Entirely. I hope to high heaven that I never give a performance of that scale onscreen. It was big, shall we say. I’m used to working with directors who say less is more, whereas yesterday it was kind of a 21-gun salute. The size of the character. He has an epic dimension anyway. He’s a god and he believes he is a super being. He has contempt for the human race. There was a sort of electric charged atmosphere with the audience yesterday. As a live performer, I never forget that. It’s a very unique thing. You don’t get it onscreen with a camera. A camera is something you have to project that charge onto. It doesn’t come for free. It’s a mechanical, technological entity. Whereas with an audience, it’s a chemistry; you can feel something coming off them.

Stage actors talk about this a lot — the audience, whether they know about it are actually complicit in the standard of the show that night. If they’re in a good mood, if they’re leaning forward, they’re listening, the actors can sense that within seconds and the show is often better. The atmosphere yesterday was out of control. When I walked out onstage, I was confronted with a wall of sound and fury, to quote the bard. It was extraordinary. I couldn’t see, I couldn’t hear for the first five seconds.

HC: It was a big day for Hall H. All of the X-Men were there…
TH: So I hear, and it was right before me. I said to someone as I was walking in, ‘So, Sir Ian McKellen, Sir Patrick Stewart, Michael Fassbender, Hugh Jackman, James McAvoy, Jennifer Lawrence, Anna Paquin, Halle Berry, they were all out there just now. And now, it’s just me.’ Yeah. I was kind of nervous.

He came to Comic-Con dressed as Jango Fett?!!?!!? OMG. Why are there not photos of that? It reminds me of another story I heard from Comic-Con – Hugh Jackman said he walked around in character as Wolverine and no one believed it was really him. I guess that’s the secret to Comic-Con – you can hide in plain sight if you’re dressed up in character. Here’s Loki at Comic-Con again: 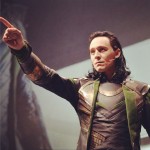