Yes, more Jennifer Lawrence photos! It’s only been a few days since I celebrated her grand return to public life. She might be more visible in the weeks leading up to X-Men: Days of Future Past. There will be premieres, and I will get carried away talking about whatever Dior dresses she wears.

These are some photos of JLaw and Nicholas Hoult together in London. They went to dinner with Tom Ford before popping out of the restaurant and into a pink taxicab. Jennifer doesn’t look thrilled to see the paparazzi. She flipped the bird from inside the car. I’m a bit upset that Tom Ford wasn’t in the frame when JLaw whipped out her middle finger. Then I could draw some controversial comparisons to this photo of Karl Lagerfeld and Kristen Stewart. An unfair comparison? Perhaps.

Back to JLaw, whose middle finger drew attention to her ring finger. She’s wearing a “new” heart-shaped turquoise ring. Is it an engagement ring? We’ve heard silly rumors about Jennifer & Nick getting engaged over Christmas last year, but I doubt they’ll marry anytime soon. They’re both in their early 20s and have plenty of time to ruin their lives with marriage. (I’m kidding.) Plus … this doesn’t even look like an engagement ring. JLaw looks angry. I wonder if the paps were shouting insults at her. The evening began with such promise. JLaw and Nick looked so happy together earlier in the day. They weren’t visibly swarmed with paps until dinnertime. Jennifer has spoken about how fame makes it hard to grab a meal without being watched. Jennifer is not happy to see these paps, and her middle finger came out to play. Just like it did in the Oscar press room last year.

It’s just a middle finger. What I find more interesting is Nick’s reaction. He’s placing his hand on JLaw’s arm to try and make her stop. He doesn’t want the press to tear her apart for this. 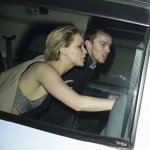