Take a walk down the ol’ gossip memory lane with me for a moment. Remember how George Clooney behaved with girlfriends before he met Amal? George would treat each of his girlfriends really well – they would often get a whole new wardrobe, hair and makeup stylists, jewelry, access to famous people, career connections and a lot more. The trade-off was always “never, ever mention marriage, especially to the press.” How many girlfriends got tossed aside as soon as the m-word left their mouths? SO MANY. And now we’re supposed to believe that something similar happened between Taylor Swift and Calvin Harris. One week she’s mentioning marriage and babies, and the next week she’s getting dumped.

Taylor Swift’s recent breakup with DJ/producer Calvin Harris was definitely one-sided, a source close to Swift tells ET. The source believes 100 percent Harris was behind the split and that it was not mutual.

“A few weeks ago she was talking about marrying him,” the source says.

We’ve heard variations on this in the past week. Even though sources close to Calvin insist that they never talked about marriage and babies, I don’t believe those sources. I think Taylor was definitely talking about marriage and even more than that, she was actively waiting for Calvin to propose. As I said before, I don’t think that is strange in the least – they were together for 15 months, and that’s a long-ass time to NEVER talk about marriage, babies or how your future together might look. Of course Taylor was thinking and talking about marriage. What’s strange here is that Calvin dumped her because of it.

Not so strange? A report out of Britain’s Metro/Grazia saying that Calvin dumped Taylor because everything about her life is heavily controlled and managed. A source claimed: “Taylor is an empire in her own right and, as such, her life is very controlled. At the end of the day, Calvin is still a smalltown boy from Dumfries and I think he struggled with living in such regimented conditions where his every move was speculated on.” I believe that Taylor is very type-A, anal retentive and yes, she’s really famous so everything she does makes news. And yes, most men probably do take issue with that.

PS… Taylor surprised some newlyweds over the weekend and it was really sweet/cute. 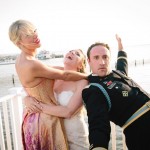