I haven’t watched cable news in months, mostly because I suspect all but a handful of commentators and journalists are working hard to normalize Emperor Baby Fists. Of course I follow the news, but at this point, I’m just reading the news because I don’t want to encounter Baby Fists’ voice or any of his struggle speeches. As I mentioned in my coverage of the inauguration, Emperor Baby Fists was and is SO MAD about the crowd size comparisons of his inauguration, especially compared to President Obama’s 2009 inaugural. Like, this is what has consumed him more than anything else in his first five days as president. All he does is sit around, watching TV and getting more and more pissy-baby about his crowd size. Interestingly enough, there’s a shocking amount of reporting about just how Bizarro-World the Trump Administration already is. You know why? Because people in his administration can’t stop themselves from running to different outlets to complain about how he’s a sucky baby who can’t be criticized for anything.

Politico: Sucky Baby Fists doesn’t like facts and he’ll base his decision-making process based on his anger towards media coverage. That’s seriously the gist of this story. Apparently, the post-inaugural coverage was increasingly focused on the sad turnout and the protests, not to mention the Women’s March, and Trump “was increasingly angered by it, sending his press secretary out to fuzz up the situation and to brag about Trump’s support, in the face of knowable facts that contradicted what he said about record crowd sizes.” One person “who frequently talks to Trump” says that “aides have to push back privately against his worst impulses in the White House, like the news conference idea, and have to control information that may infuriate him. He gets bored and likes to watch TV, this person said, so it is important to minimize that.” Sources also say that he will publicly refuse to admit when he’s wrong and that everyone has to walk on eggshells around him to get him to do anything.

Washington Post: Baby Fists grew “enraged” with the news coverage of his crowd turnout on Saturday, which is why he sent out his press secretary Sean Spicer to blatantly lie about it. Now Baby Fists is mad at Spicer and he might even fire him because… Baby Fists demanded a “fiery” response to accurate reporting about crowd sizes. Sources tell WaPo: “Trump has been resentful, even furious, at what he views as the media’s failure to reflect the magnitude of his achievements, and he feels demoralized that the public’s perception of his presidency so far does not necessarily align with his own sense of accomplishment.” Pissy Baby is so mad that no one gave him a cookie for winning the presidency on a fascist platform!! This WaPo story also details all of the in-fighting among Trump staffers, which… um, that’s why they’re leaking all of these stories!

If only Emperor Baby Fists’ opponent had made the argument that he fundamentally does not have the temperament to be president. Oh, wait. She did that. She did that over and over. And people still voted for him.

What else? Baby Fists and Sean Spicer are still talking about this Alternative Fact that “five million people voted illegally” and that’s why Baby Fists lost the popular vote. Because he can’t admit that nearly three million more people voted for Hillary Clinton.

And finally, behold this Alternative Fact – Trump tweeted out a panaroma view of his BIGLY inaugural turnout. Eagle-eyed viewers might want to check out the date though. January 21st was the day of the Women’s March. His sad, un-bigly inauguration was the day before.

A photo delivered yesterday that will be displayed in the upper/lower press hall. Thank you Abbas! pic.twitter.com/Uzp0ivvRp0 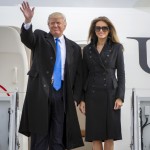