I’m pleasantly surprised by how low-key Amy Schumer’s wedding really was. Sometimes, celebrities claim that they’re just doing something “really simple” and you find out that their idea of “really simple” involves a five-course dinner for 200 people and two wedding planners and all of that. It’s not that every person should have one particular kind of wedding, it’s just that if you want to plan your massive dream wedding, JUST SAY THAT. In any case, I don’t think Amy Schumer was one of those “my dream wedding involves a 50-page itinerary” kind of bride. She seemed to decide to marry Chris Fischer on the spur of the moment, just days before the actual wedding took place on Tuesday in Malibu.

People Magazine had tons of details from the wedding, and Amy posted some no-nonsense Instagram slideshows for her wedding photos. Apparently, Amy chose her Monique Lhuillier gown just four days before the wedding, and it was the first and only gown she tried on. She did have a stylist help her out, but it sounds like it was a pretty easy day for the stylist. Amy paired the Lhuillier gown with a cream cardigan for the post-wedding festivities, then she changed into a simple white slipdress from The Row even later on in the evening. Amy didn’t wear any jewelry except for the ring Chris gave her, and her stylist says that Amy isn’t much of a jewelry person anyway.

The photos she posted include some pics of her father, who is in a wheelchair. Some commenters suggested that her father’s declining health might be one of the reasons for the surprise wedding. I think that’s more than possible. As for the other theory, that Amy is pregnant… she said on Instagram that she’s not preg. She also says she doesn’t want any gifts but people can make donations to Everytown, which is the gun safety/gun control group she’s been working with ever since a gunman shot and killed two women at a movie theater showing Trainwreck. 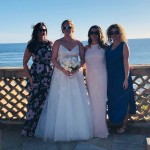 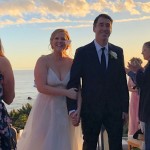