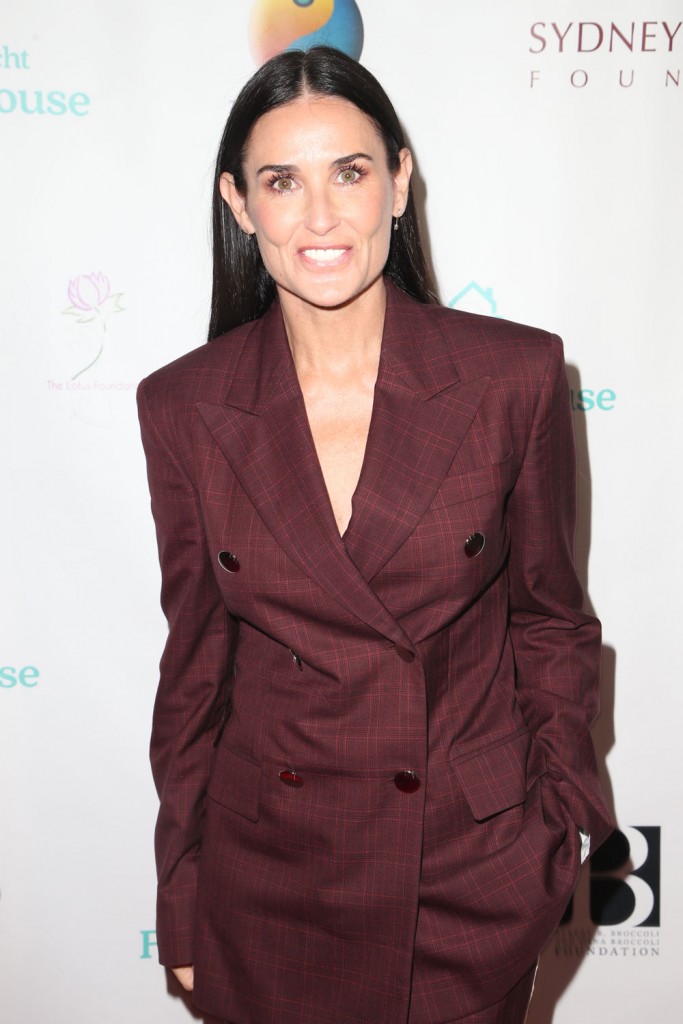 It came out in late 2011 that Demi Moore’s then-husband, Ashton Kutcher, was cheating on her. One of his hookups went to the tabloids, which must have been devastating to Demi. Their marriage dissolved quickly after that. In January of 2012, Demi had a medical crisis/overdose, thought to be from synthetic marijuana, for which the paramedics were called. She went to rehab in early 2012. There were stories and photos of her into 2013 suggesting she was not yet sober. Demi achieved sobriety in 2014 I think, when she started showing up at events looking fabulous. She did this without much fanfare and without talking about it. I mention all this as background and am not trying to shame her. We all have our own journey and she never put herself out there as an example.

Anyway, Demi was honored over the weekend as Woman of The Year by the Peggy Albrecht Friendly House, which is “the first residential program in the country for women recovering from alcohol and drug abuse.” In her acceptance speech she talked about her sobriety journey in general terms. She also alluded to an intervention, but she said it happened early in her career. I read these headlines thinking she was talking about that time following her split with Ashton but don’t think that’s the case. Here’s what she said.

“I feel like there’s a defining moments in our lives that shape who we are and the direction we go and early in my career, I was spiraling down a path of real self-destruction and no matter what successes I had, I just never felt good enough… I had absolutely no value for myself and this self-destructive path, it very quickly brought me to a real crisis point and it wasn’t clear at the time the reason. Maybe it was divine intervention.”

Moore noted two unnamed people who she “barely knew” who stood up for her. As the actress joked, it was more like an “ultimatum.” “Unless I was dead, I better show up,” she quipped.

Without getting too specific, the G.I. Jane star said she was given “a chance to redirect the course of my life before I destroyed everything.”

“Clearly they saw more of me than I saw of myself,” Moore noted. “And I’m so grateful because without that opportunity, without their believing me, I wouldn’t be standing here today.”

“Life is certainly not a straight line and I think everyone here has dealt with not feeling good enough at some point in their lives,” she said. “I know in a moment of great struggle for me, I’ve reached out to a wise teacher and expressed my fear that I wasn’t good enough and she said, ‘You will never be good enough, but you can know the value of your worth. Put down the measuring stick.’”

As she finished, “So today, I put down the measuring stick and I thank you for this beautiful acknowledgment and the opportunity to know the value of my worth.”

It’s kind of impressive that Demi just got sober and didn’t say anything about it for years. At first this reminded me of Simon Pegg opening up about his sobriety a full seven years later, when he knew he was able to maintain it. Demi didn’t get into details here, which is her prerogative, and she phrases it like it happened decades ago. Plus I guess I can’t assume that’s what happened, because she didn’t even specify. This is probably the most she’ll say, that it was hard and she felt “less than.”

Also, I don’t mind the oversize 80s jacket trend and I will admit to owning a couple, but this suit is messy and looks too big. You can wear a giant jacket, but maybe have a fitted shirt underneath and don’t pair it with pants that are also loose. She looks great though otherwise. 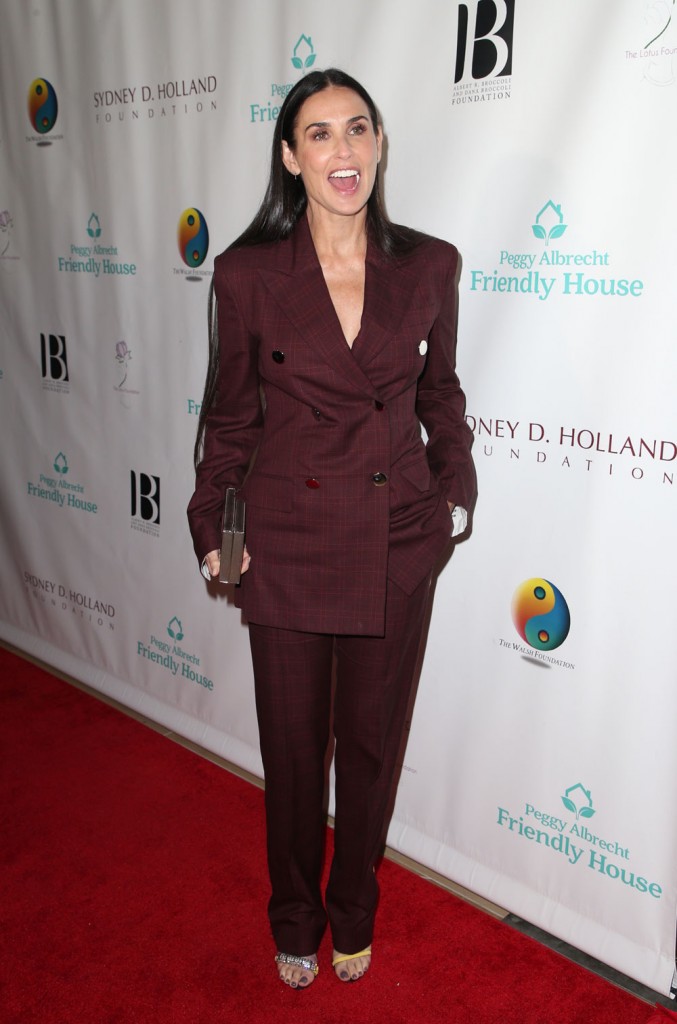 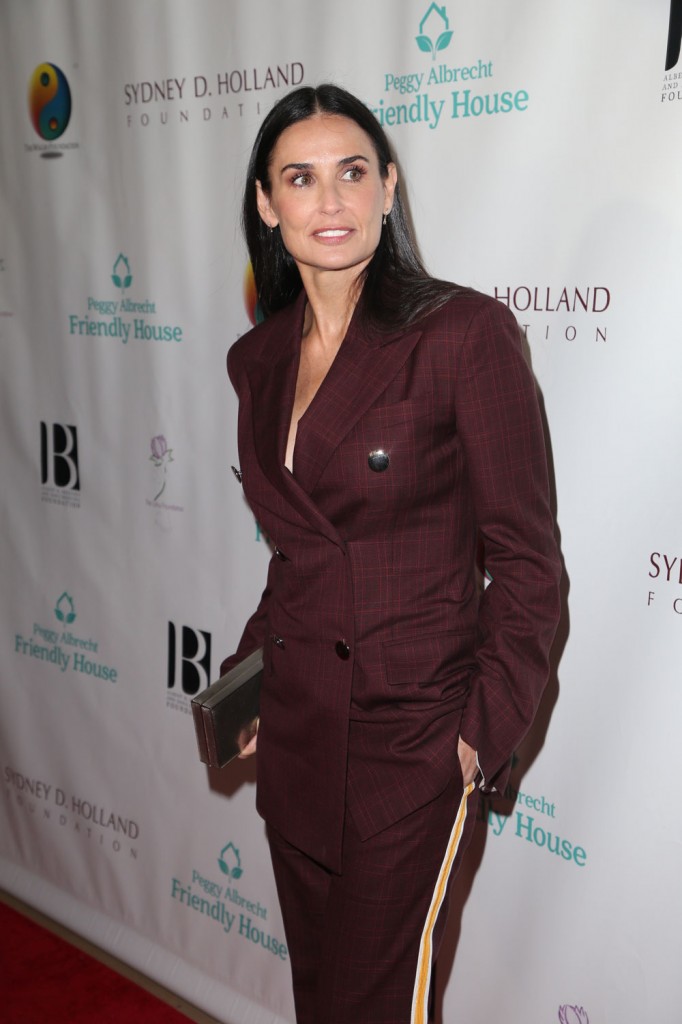 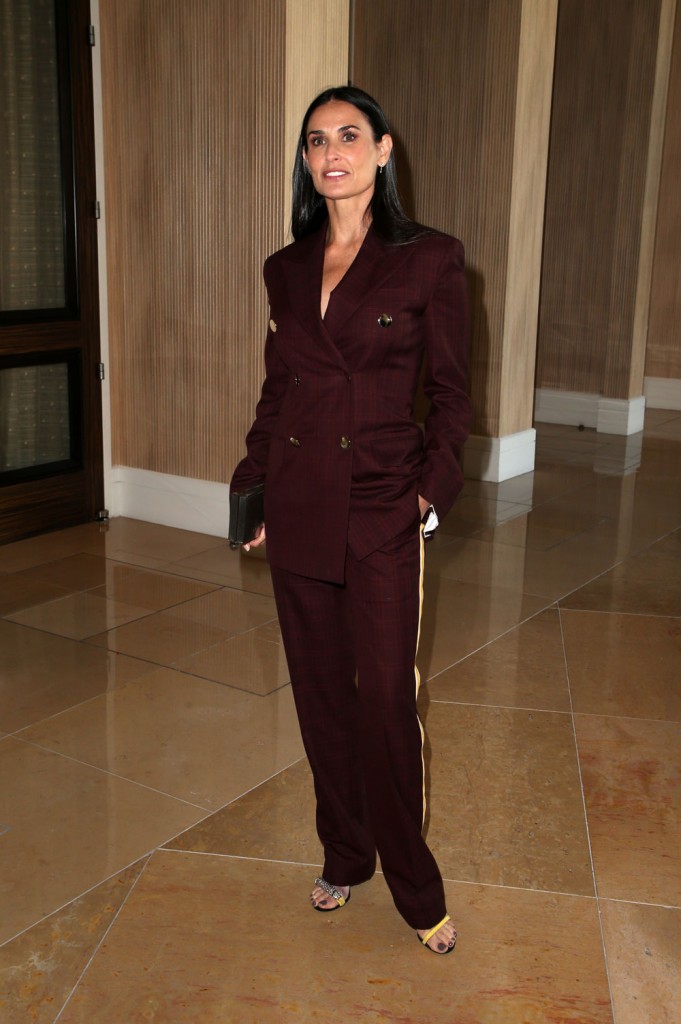