Michelle Obama praises ‘the beauty’ of George W. Bush for giving her candy 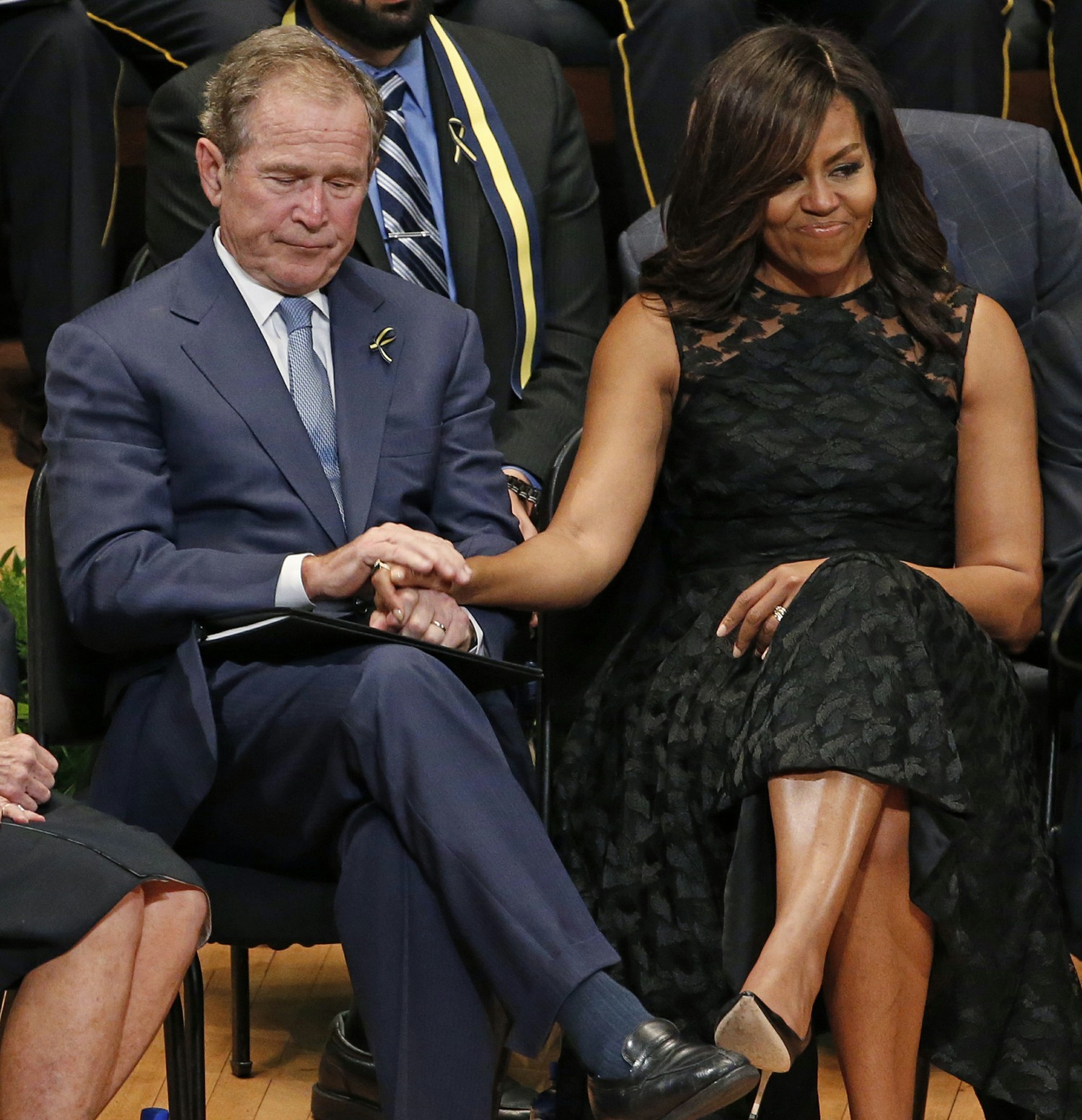 I think it’s perfectly possible – and acceptable – to acknowledge George W. Bush’s many faults as a man and a president and still be able to acknowledge his humanity and his moments of decency. I hated his presidency, and I still believe the way Bush & company lied us into the Iraq War was the beginning of the end of the American presidency. But I can also say that Bush, as a man, was capable and is still capable of moments of grace, decency and profound kindness. Those moments have become a stark contrast to the general era of indecency, rage and ignorance from Donald Trump.

Dubya has adored Michelle Obama from the word go – during the Obama presidency, Bush seemed to actively pursue a friendship with both Obamas, and he seemed especially sweet on Michelle. Over the years, we’ve seen their friendship play out – Michelle embracing Bush in the middle of an event, or Bush taking Michelle’s hand in prayer, or Bush sneaking a piece of candy to Michelle at McCain’s funeral. At his father’s funeral, Bush once again made a point of handing Michelle a mint.

Michelle has previously said that she thinks Bush is a “beautiful, funny, kind and sweet man.” Well, she’s still on her book tour – which is wildly successful, and her book is selling out – and she was asked again about her friendship with Bush, and the latest candy-passing moment:

Michelle Obama was just as charmed by former President George W. Bush‘s mint passes as fans were. The Becoming author and Bush were at the center of two viral moments this year when cameras caught the former president passing her mints — first at Sen. John McCain‘s state funeral in September and then at former President George H.W. Bush’s state funeral in December. Asked about the latter surprise on Friday during the San Jose, California stop on her ongoing book tour, Obama, 54, spoke sweetly of George W., 72.

“He has the presence of mind and the sense of humor to bring me a mint,” Obama said, according to ABC7. “And he made it a point to give me that mint right then and there, and that’s the beauty of George Bush.”

Is Michelle overselling this? Or are we so hungry for ANY moment of grace, bipartisanship and just NICENESS in the Trump era? I think it’s a little bit of everything. We desperately want to see anything like the Bush-Obama friendship because we believe that, at the end of the day, we can all get along. And it’s genuine to boot – Dubya adores Michelle, and she seems to truly like him.

51 Responses to “Michelle Obama praises ‘the beauty’ of George W. Bush for giving her candy”