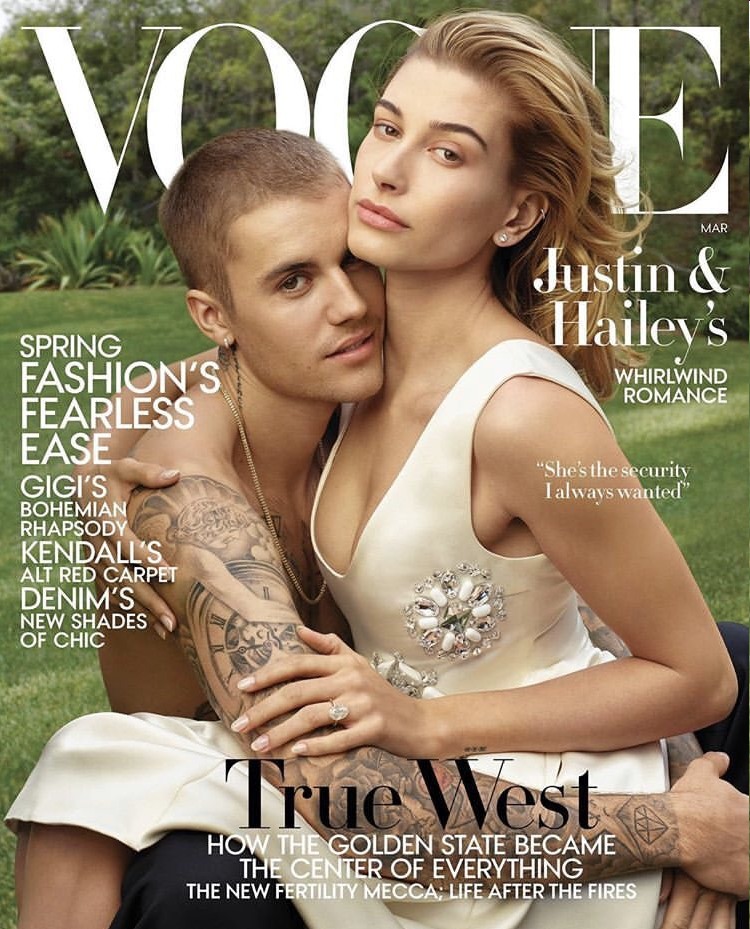 You guys… Vogue released their March cover story and editorial and it is a TRIP. As we previewed earlier, Justin and Hailey Bieber are the cover stars. While the cover is iconic (I’m not being sarcastic), it’s not the most flattering for Hailey. The rest of the Annie Leibovitz photos are great though – you can see the editorial here. But the real iconic thing is the interview!!! Vogue has gotten into a terrible rut with their cover interviews for years now – an endless parade of anxious 20-somethings who only talk about meditation and diets. This article is… crazy. It’s because Justin has already lived so much life and so much drama at 24 (he turns 25 in a few weeks). Hailey is only 22, and she’s a million times more organized than him, and she’s the mature one, trying to figure out how they’re going to make this marriage work. You can read the full piece here. Some highlights:

Hailey on how they’re already in marriage counseling: “The thing is, marriage is very hard. That is the sentence you should lead with. It’s really effing hard.”

They briefly dated three years ago: Both intimate that a betrayal occurred. “Negative things happened that we still need to talk about and work through,” Hailey explains. “Fizzled would not be the right word—it was more like a very dramatic excommunication. There was a period where if I walked into a room, he would walk out.”

Justin is unstable: “I’m the emotionally unstable one. I struggle with finding peace. I just feel like I care so much and I want things to be so good and I want people to like me. Hailey’s very logical and structured, which I need. I’ve always wanted security—with my dad being gone sometimes when I was a kid, with being on the road. With the lifestyle I live, everything is so uncertain. I need one thing that’s certain. And that is my baby boo.”

His abuse of drugs & Xanax: “I found myself doing things that I was so ashamed of, being super-promiscuous and stuff, and I think I used Xanax because I was so ashamed. My mom always said to treat women with respect. For me that was always in my head while I was doing it, so I could never enjoy it. Drugs put a screen between me and what I was doing. It got pretty dark. I think there were times when my security was coming in late at night to check my pulse and see if I was still breathing.”

Hailey on Bieber’s sobriety: “I grieved very intensely over the whole situation. I just wanted him to be happy and be good and be safe and feel joy. But I’m really proud of him. To do it without a program, and to stick with it without a sober coach or AA or classes—I think it’s extraordinary. He is, in ways, a walking miracle.”

He got back with Hailey when he was doing a year-long celibacy thing: When the couple reconnected last June, Justin was more than a year into a self-imposed tenure of celibacy. He had what he calls “a legitimate problem with sex.” It was his remaining vice, an addiction that had long since ceased to provide him any pleasure. Not having sex, he decided, was a way for him to feel closer to God. “He doesn’t ask us not to have sex for him because he wants rules and stuff,” Justin explains. “He’s like, I’m trying to protect you from hurt and pain. I think sex can cause a lot of pain. Sometimes people have sex because they don’t feel good enough. Because they lack self-worth. Women do that, and guys do that. I wanted to rededicate myself to God in that way because I really felt it was better for the condition of my soul. And I believe that God blessed me with Hailey as a result. There are perks. You get rewarded for good behavior.”

They did get married so they could have sex: People have speculated that Justin and Hailey married because she got pregnant, which is false. (No babies for at least a couple of years, Hailey says.) Justin admits that while a desire finally to have sex was one reason they sped to the courthouse, it was not the only reason. “When I saw her last June, I just forgot how much I loved her and how much I missed her and how much of a positive impact she made on my life. I was like, Holy cow, this is what I’ve been looking for.”

It’s like a slow-motion disaster and you can’t avert your eyes. To be clear, this was the most I’ve ever liked Justin – he comes across as extremely vulnerable throughout, and like he leans heavily on Hailey. That’s a lot for a 22-year-old young woman though, so I ended up feeling sorry for her too. Mostly, I came away from this thinking that they have no business being married.