Kat Von D: ‘I am not anti-Semitic and I am not an anti-vaxxer’ 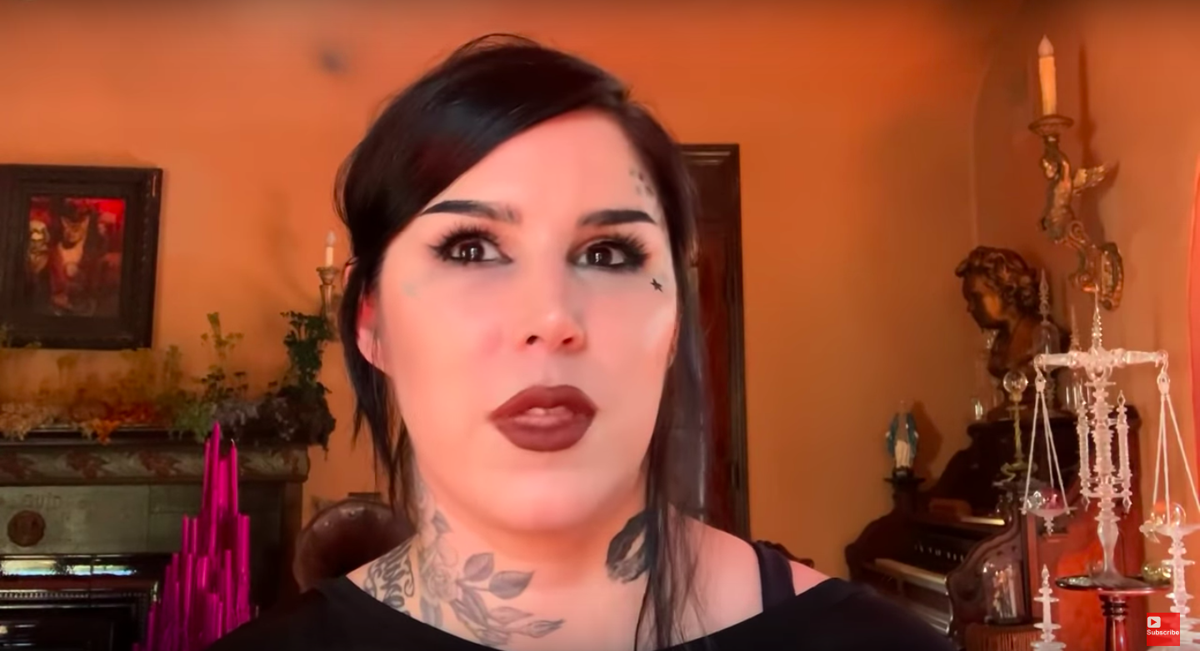 Kat Von D has a new vegan eyeshadow palette launching at Sephora. As we discussed a couple of weeks ago, her makeup brand has been suffering for whatever reason. It could be because the quality is slipping, that the brand is being boycotted after Kat came out as an antivaxxer or it could be several things at once. As background, last June before Kat’s baby was born she posted a message to Instagram saying that she planned to raise a “vegan child, without vaccinations.” She went on about it and claimed she was doing “research and educating myself.”

Also she was accused of anti-Semitism in 2008 when she allegedly wrote negative comments to a former coworker that included a flaming Star of David. She denies writing that and said it was a forgery. In a new video Kat claims she’s not a Nazi, that she’s offended that people are calling her family that, and that she’s not an anti-vaxxer either. Her husband, Leafar Seyer, has a swastika tattoo on his neck just FYI. Kat is a tattoo artist and could easily cover it for him. Here’s some of what she said and you can see that video below.

As a lot of you know I’ve been getting a ton of hate over two controversial topics. Just to set the record straight I am not anti-Semitic and I am not an anti-vaxxer.

Out of every comment that I’ve gotten the ones that are calling me and my family Nazis are extremely offensive and super hurtful not just to me but to my family.

I am a proud Latina. I was born in Mexico. Yo soy latina.

How the anti-Semitism story started
A lot of you remember Miami Ink. They wanted to cast a female tattoo artist. I was about 22 years old. The ratings went up. One of the other castmembers [felt] threatened. That’s when the hazing started. [He sabotaged my equipment.] He said things to me that were so repulsive. He sent me a photo of his pen-s. He grabbed my breasts. I quit.

When he found out that [my own show] LA Ink was filming he thought he could cancel my show by going to the network and showing them this 8×10 with a forged anti-Semitic message on it.

Since then we have decided to consult with our pediatrician and just let him educate us and guide us.

Unlike before I have learned my lesson and I am choosing not to make our decision public and I want to thank you guys for respecting that.

To all of you who sent so much hate our way…I’m not mad at you… some of the comments were so cruel and hurtful I hope you never have to go through that.

I believe her that this guy harassed her on the set of Miami Ink. Whether or not she wrote that was up to question. She did put out a lipstick with the name “Selektion,” which could be a benign German word she chose (it means selection obviously) but which is known as a Nazi concentration camp term. She pulled that lipstick along with other controversial lipsticks called “Underage Red” and “Celebutard.”

Why is it that people who are called racists or Nazis act like it’s more offensive to be called one than to be the target of Nazis and racists? How hard would it have been for her to say that racism and anti-semitism are poisonous and awful and that her heart goes out to people discriminated against? Instead it’s all about her and how she’s so hurt by being called a Nazi. She similarly never talks about the rise of preventable diseases and how dangerous and misinformed anti-vaxxers are. She didn’t say that because she doesn’t believe it. She just said she’s not going to tell us her decision. She claimed to have learned her lesson, but then admitted that lesson was to keep quiet.

Just came back from our day of volunteering at @farmsanctuary to all these beautiful flowers from loved ones! Thank you to all of you for the birthday love! What a perfect day! ❤️