Serena Williams: ‘I’m really, quite frankly, too old to be in controversy’ 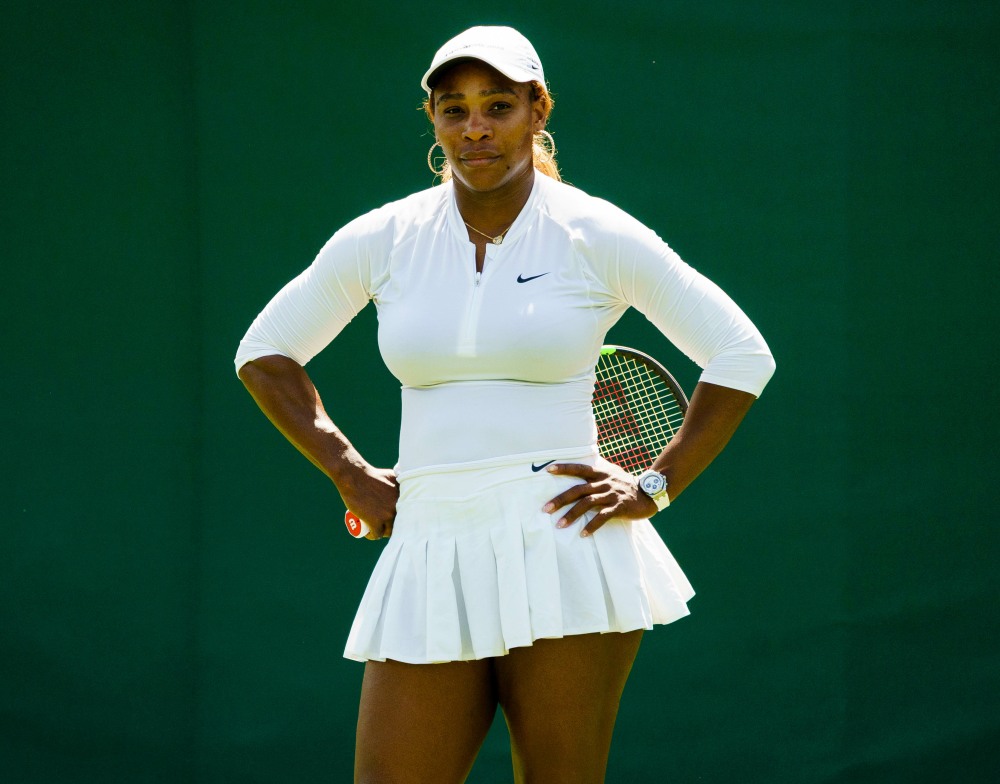 Here are some photos of Serena Williams at the All-England Club from the past few days. Isn’t her Nike kit so cute? It’s so cute that I suspect it’s not real outfit for competition. This is probably just her “practice” outfit and we’ll see some white-ballerina gear on Tuesday, which is when she’ll play her first match. The Wimbledon draw came out on Friday and Serena is in “the quarter of death” – it’s insane how stacked the quarter is, as it includes the #1, Ash Barty, Angelique Kerber (who beat Serena in the Wimbledon final last year), Belinda Bencic (super-talented Swiss), Donna Vekic (a grass court specialist), Julia Goerges (who played Serena in last year’s semifinal) and Garbine Murguruza (who won the Wimbledon title two years ago). And if she gets through them, she’s on to… the semifinal.

Serena doesn’t seem too worried about her insane draw, so at least that’s something. She did media on-site on Saturday and talked about how she sought treatment for the leg/knee issue she’s been dealing with for most of this year and how she’s feeling better these days. She also answered questions about the kerfuffle that went down at the French Open, where reporters lied and said Serena “demanded” that Dominic Thiem be kicked out of the larger conference room and then a day later, Thiem said Serena has a “bad personality,” even though everyone knew at that point that Serena did nothing wrong and the tournament organizers screwed up. Here’s what Serena had to say about it now:

“I asked them to put me in the small room. I begged them to put me in the small room, and they didn’t. I said, ‘Listen, I can come back. I’m just going to go back’. They were like, ‘No, stay here’. They pulled him out. I was like, ‘You guys are so rude to do that’, quote-unquote, that’s what I said. The next day I had a bad personality. Literally that’s what happened. I actually stuck up for the guy, so I don’t understand how I got a bad personality for telling them what they did was wrong to him. But we spoke about it. I’ve always liked him. I still like him. He’s a great player. I mean, he’s unbelievable. I’m really, quite frankly, too old to be in controversy. That’s why I just wanted to clear the air. I’m like, ‘Dude, I told them that it wasn’t right what they did’. He said he didn’t say ‘bad personality’, that the media mixed up his words. It’s all good.”

Even though that sh-t at the French Open was dog-whistle racist trash, I’ll admit that I’m slightly amused that this is STILL a story. Like, we’ve already moved on to another Slam and we’re still talking about Dominic Thiem vs. Serena. And to be fair to Serena, Thiem was the one who showed his ass. I can’t believe he would actually tell Serena “I didn’t say you had a ‘bad personality’ it’s fake news!” Dude was literally on camera with Eurosport. She should have pulled out the receipts. But, as she says, “I’m really, quite frankly, too old to be in controversy.” Too bad, because Controversy Serena is one of the best Serenas.

Also at the press conference: Serena talked about how she’s rooting for the USWNT in the World Cup, but that she spent a lot of time in France working out with the England Lionesses and she sort of loves them now. But the best part is when she is asked directly if she would be up for playing mixed doubles with Andy Murray and she basically sounds like she’s open to it and that they’ve already talked about it. I think it’s happening!!!! Here’s her whole pre-tournament interview.

P.S. I don’t know how to explain this photo. I know she’s very close to Novak, but what’s up with Dimitrov? He’s been sliding up to both Williams sisters a lot recently. *insert side-eye and black heart emojis*

24 Responses to “Serena Williams: ‘I’m really, quite frankly, too old to be in controversy’”